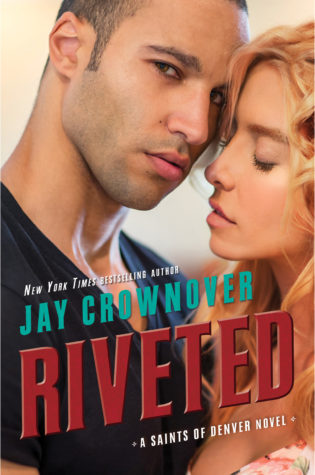 The next book in the smoking hot SAINTS OF DENVER series from NYT bestselling author of the MARKED MEN series, Jay Crownover
Everyone else in Dixie Carmichael’s life has made falling in love look easy, and now she is ready for her own chance at some of that happily ever after. Which means she’s done pining for the moody, silent former soldier who works with her at the bar that’s become her home away from home. Nope. No more chasing the hot as heck thundercloud of a man and no more waiting for Mr. Right to find her; she’s going hunting for him… even if she knows her heart is stuck on its stupid infatuation with Dash Churchill.
Denver has always been just a pit stop for Church on his way back to rural Mississippi. It was supposed to be simple, uneventful, but nothing could have prepared him for the bubbly, bouncy redhead with doe eyes and endless curves. Now he knows it’s time to get out of Denver, fast. For a man used to living in the shadows, the idea of spending his days in the sun is nothing short of terrifying.
When Dixie and Church find themselves caught up in a homecoming overshadowed with lies and danger, Dixie realizes that while falling in love is easy, loving takes a whole lot more work… especially when Mr. Right thinks he’s all wrong for you.

Riveted is about a woman who waited so long to find the right one and when the right one came along she wasn’t sure if she would ever be the right one for him. Dixie Carmichael has always believed in love, she has this bubbly happy personality and she wants everyone around her to be happy. Dashiel ‘Church’ Churchill is trying to recover himself before heading to his hometown, he is the silent brooding type.

Church and Dixie work together at the bar owned by Asa and Rome, in the months that Church has been there, Dixie has really taken with him. When Church has to return to him hometown and needs a favour, he ofcourse thinks of Dixie, the warm kind hearted woman he has gotten to care for more than he would like to admit.

Church and Dixie have both been through a lot, Church has been through several tragedies (from his parents to being in the military) that make him want to run away as far as he can from the word love. While Dixie even through the hardships she faced never gave up on love. Dixie’s gentle and sweet nature makes Church slowly but surely realise that not all love given ends up badly.

I really liked them together, its Jay Crownover so ofcourse the couple had abundance of chemistry and connection but more than I really liked how they were with each other. It was just gentle kind and caring love. It has opposites attract trope which worked really well here. We get to see them grown closer and get to know each other and fall deeper in love. They were honest and understanding towards each other. It was a natural progression of their relationship and while Church didn’t think that a road trip and being this close to Dixie would make him open up to her, and just end up being really in love with her (which was what he had hoped to avoid).

The book has a road trip, a homecoming, suspense and a couple who didn’t think they would get a happily ever after. I really adore this series, the characters are multifaceted, their personalities vivid and the secondary characters are also very interesting. A fantastic edition the series and I’m really looking forward to Poppy and Wheeler’s story!