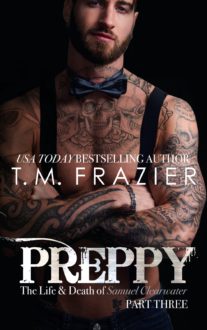 The bow tie is BACK!

Dre was just a beautiful stranger when Preppy saved her the first time around. Now, he has to save her again, but she’s no longer some stranger, she’s family, and he has no idea who or what he’s up against.

What he does know is that putting his family back together is the only acceptable outcome.

He’s alive…and he’s out for BLOOD.

Preppy Part Three is the third book and conclusion of Preppy and Dre’s story. It’s also the 7th book in the King Series, which should be read in order starting with KING & TYRANT. 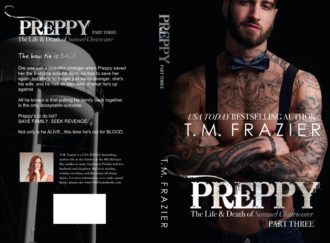 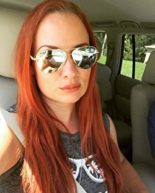 T.M. Frazier is a USA TODAY BESTSELLING AUTHOR best known for her KING SERIES. She was born on Long Island, NY. When she was eight years old she moved with her mom, dad, and older sister to sunny Southwest Florida where she still lives today with her husband and daughter.
When she was in middle school she was in a club called AUTHORS CLUB with a group of other young girls interested in creative writing. Little did she know that years later life would come full circle.
After graduating high school, she attended Florida Gulf Coast University and had every intention of becoming a news reporter when she got sucked into real estate where she worked in sales for over ten years.
Throughout the years T.M. never gave up the dream of writing and with her husband’s encouragement, and a lot of sleepless nights, she realized her dream and released her first novel, The Dark Light of Day, in 2013.
She hit the USA TODAY bestsellers list for the first time with Tyrant in 2015 and her book Preppy Part One, was a 2016 Goodreads Choice Award finalist for best romance.