Lena Diaz concludes her sexy, suspenseful EXIT Inc. series as an FBI agent teams up with a beautiful assassin to uncover a deadly government conspiracy...

After a tragic mistake nearly destroyed his life, Special Agent Kade Quinn will do whatever it takes to save his career. His latest mission? Track and capture the remaining EXIT operatives to determine if they’re still a threat. But his next target—a stunning female assassin—is both elusive and dangerously appealing.

Bailey Stark has outsmarted the FBI so far, but she’s tired of running. Tired of watching her friends ambushed by government agents in tactical gear and never seen again. She suspects they aren’t being evaluated—they’re being exterminated—and she’s determined to convince Agent Quinn his mission is a lie before it’s too late. Bailey doesn’t want to rely on him. She definitely shouldn’t desire him. But she knows teaming up with the skilled, sexy agent may be her only hope.

Kade doesn’t want to believe Bailey’s claims, but he promises to keep her safe. Trusting one another is difficult. Fighting their attraction is harder. And as they uncover the disturbing truth behind his mission . . . staying alive will be nearly impossible.

Friday, 11:55 p.m.
It was a perfect night to catch a killer. A warm breeze blew out of the south at about six miles per hour. Rain-heavy clouds covered the half-moon, plunging the cliff where Special Agent Kade Quinn stood into darkness. He was betting on the old cliché, third time’s a charm. And also betting on the numbers—that his six, shiny new special agents could take down one highly skilled, remarkably cunning, experienced assassin.
Not the kind of odds to go to Vegas over. But he had to work with what he had. If things went as planned, Bailey Stark would soon be in custody like the dozens of other EXIT Inc. Enforcers that his team had managed to capture. The now-defunct company could never again fool the public into believing that all it did was offer vacation packages, so-called “EXtreme International Tours.” The clandestine organization’s true legacy as a corrupt front for government-sanctioned murder would end with the capture of the last few Enforcers. By the time his mission was over, every last one functioning members of society.
And innocents like Abby would never again become the victims of killers like Bailey.
Between the nightmare of his wife’s death and the near-constant ache in his ruined left leg, Kade had his own, very personal, debt with EXIT. And he planned on collecting. He scanned the tree line. Past the red oak and Ponderosa pines, the Colorado Rockies squatted like dark sentinels watching over tonight’s operation. Below him, in the middle of a wide, nearly treeless valley, was ground zero, the two-story cottage that Bailey believed would be her sanctuary. Instead, it would become her last stand. A quarter-mile-long driveway connected a two-lane highway to this remote property. At close to midnight and an hour’s drive from Boulder, the road was essentially deserted. Kade couldn’t have asked for a better place to launch an ambush. And if his intel was correct, Bailey should arrive within the next half hour.
Only a few minutes later the two-way radio on his belt crackled to life. “Big Bear to Lone Wolf. Come in.”
Kade rolled his eyes and pressed the transmit button. “Kade here. What’s the situation report, Nichols?”
“You’re ruining my fun, boss.” He shook his head but played along. He had to pick his battles. “Lone Wolf to Big Bear. What’s the sitrep?”
“Much better.” A chuckle sounded through the radio. “A beat-up, dark blue Camaro just turned off the highway. One occupant. Looks to be our target. She’s heading toward the cottage.”
“Use the SUV to block the road behind her. If she gets spooked, I don’t want her doing a one-eighty and making it to the highway.”
“Affirmative. Big Bear out.”
Kade clicked off the mic and belatedly wished he’d downed a handful of antacids before driving out here. Being assigned these eager, raw newbies had to be his penance for his breakdown after the accident. They were also the reason he was here in person rather than monitoring the mission remotely per the usual protocol. Tonight’s target had already tricked his team and gotten away—twice. Kade was here to make sure that didn’t happen again.
“Cord,” he said through the two-way. “Sitrep.”
“You mean you aren’t going to call me Little Bear?”
“Do you want me to?” He was half-afraid of the answer.
“Hell no. I’m not in junior high.”
“You guys know I can hear you, right?” Nichols chimed in.
“Sitrep,” Kade growled.
“She just passed my ten o’clock,” Cord announced. “Dom should have her in his sights in a few seconds.”
“Already do,” Dominic confirmed. “The car is pulling up to the house. We’re all set.”
“Radio silence in three, two, one.” Kade clicked off the transmitter.
They couldn’t risk the sound of static or a mistimed transmission alerting their target. Or at least, that was the official reason for breaking communications. Unofficially, he needed a few moments of silence to get his impatience under control. What had happened to the bureau’s standards? Big Bear, Little Bear? Hell, two of his agents—Dom and Jack—had tattoos. Since when had the FBI allowed tats? Quantico was going soft.
He looked through the binoculars. Instead of driving into the attached garage as expected, Bailey did a three-point turn and parked the Camaro pointing down the driveway. Was she suspicious? Had she purposely positioned her vehicle for a quick getaway? His hands tightened around the binoculars. The driver’s door opened. A petite woman in dark-colored shorts and a white T-shirt emerged. A pistol was holstered at her waist and her shoulder-length, curly red hair reflected like flames in the soft glow of the porch light. Even at this distance she had the kinds of curves that made men pay attention—including Kade, much to his chagrin.
He had more reason than most to despise Enforcers, and yet his breath caught every time he looked at one of her photographs in the case file. He couldn’t imagine the effect she’d have on him if he ever got within a few feet of her in person. It was bad enough that his pulse quickened whenever those deep green eyes gazed back at him from her pictures. But what he hated the most was the odd feeling of kinship he felt toward her, a tug of empathy when he saw the shadows in her eyes, the same shadows he saw every time he looked in a mirror. He couldn’t help wondering what had happened to harden her and make her look so lost, so sad, so incredibly . . . alone.

Enter the Rafflecopter Giveaway by clicking the link below. This giveaway is for 3 print sets of the EXIT, INC. series (includes: Exit Strategy, No Exit, and Final Exit). 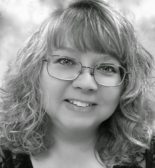 Originally from Kentucky, romantic suspense author Lena Diaz also lived in California and Louisiana before settling in Northeast Florida with her husband, two children, and a Shetland Sheepdog named Sparky. A Romance Writers of America Golden Heart® finalist, she’s won the prestigious Daphne du Maurier Award for Excellence in Mystery/Suspense and has been a finalist for the National Excellence in Romance Fiction Award. She loves to watch action movies, garden, and hike in the beautiful Tennessee Smoky Mountains.