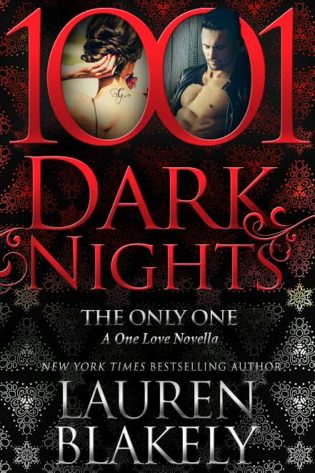 The Only One (One Love) by Lauren Blakely
on 6 December 2016
Genres: Contemporary, Romance, Romantic Comedy
Pages: 140
Format: eARC
Source: the publisher
Buy on Amazon US, Buy on Amazon UK

From the New York Times bestselling author of THE SEXY ONE comes a romance about fate and second chances.
Let’s say there was this guy. And he gave you the most mind-blowing night of sex in your life. And you never saw him again.

Now, it turns out he’s the ONLY ONE in all of Manhattan whose restaurant is available for my charity’s event.

The trouble is, he doesn’t recognize me.
***
This woman I’m working with is so damn alluring. The first time I set eyes on her, I’m captivated and I can’t get her out of my mind. Even if it’s risky to tango with someone I’m working with, she’s a risk I’m willing to take.

The trouble is, she won’t give me the time of day.

But I’m determined to change that.

Penelope ‘Penny’ Jones is the owner of Little friends shop, an animal rescue she runs with her friend. She has been a minor character in some of the previous contemporaries by Lauren Blakely. When Penny caterer cancels at the last minute for a charity event she is planning for her animal rescue, she ends up looking for a replacement restaurant and to her dismay finds out that the owner is man she thought she’d never see again and has been living in her city for years.

Gabriel Mathias is a TV chef and owns a restaurant in NYC. When a client who shows up reminding him of the woman he lost in Barcelona, he is shocked but elated. The woman tells him they have never met but even though she looks different, everything about her reminds Gabriel of Penelope.

The Only one is a second chance at love with the one who got away. Gabriel and Penny met on vacation in Barcelona, after an intense and passionate affair they promised to meet in US but fate intervened. Penny left broken hearted and angry when Gabriel didn’t show up at their place of rendezvous. Now 10 years later, they meet again but Penny is still quite angry and Gabriel can’t believe that he has finally found his Penelope.

I really enjoy Lauren Blakely’s writing and her characters along with the story line, they are always unique and completely suited to the couple. Penny and Gabriel were cute together, they had fallen for each other back in Barcelona and meeting again and being with each other was like the 10 years apart that never happened. They still had the amazing connection and chemistry they had when they first met.

View Spoiler »why not 5 stars? I did have slight issues with some aspects of the story, one of them being the amount of time they spend together in Barcelona which made my enjoyment a bit less than I usually have with Lauren Blakely’s book. « Hide Spoiler

Overall, I quite liked this short story, it had little drama and more sweetness of being with the one you wanted for years. I’m really looking forward to reading Full Package by Lauren Blakely which releases in Jan 2017!

I was taken with her the moment I sat down at the table next to hers at the café on a street corner in Barcelona. Her warm eyes met mine, and I wasn’t able to look away, so I didn’t. When her almond cake arrived, she arched an eyebrow, and said, “You’re admiring my dessert.”
I laughed. “I don’t think it’s the dessert I’m admiring. But I have been hoping you’d want company to help devour it. May I join you?”She nodded and I moved to her table. She picked up her fork and said, “It’s made with caramel—my favorite. And it’s divine. By all means, let’s devour.”“I’m a big believer in the consumption of sweets.”“We have a saying in America. Eat dessert first,” she said.I lifted my fork and took a bite of the Tarta de Santiago. “I like this saying. Can you appoint me a temporary American?”

She tapped my shoulder, something that shouldn’t have turned me on, but somehow it did.

“There. Done. By the power vested in me, I’ve declared you able to eat dessert first.”

“I must tell you a secret. I already possessed the ability,” I said, and she laughed, a pretty sound, like bells.

And I was halfway to hooked. Maybe it was her confidence. She seemed a few years younger than me, but there wasn’t a shred of shyness or insecurity about her. Her wit was intoxicating, and so was her beauty.

When we finished the almond cake with the caramel layer on the bottom, I was certain of two things—I didn’t want to let her get away, and I needed to see her again. “May I take you to dinner?” I asked.

But we didn’t wait till dinner. We spent the afternoon together, wandering around the city, strolling through the side streets, ducking into the churches and buildings and seeing the sights she wanted to explore.

All the while, I learned more about her. That she’d studied European History in college, that she’d loved traveling across the continent these last few months, and that she was looking forward to her job on Wall Street at Smith and Holloway Bank when she returned to the United States.

Mostly, she added. She was mostly looking forward to it.

“This trip is my last hurrah before I enter the working world,” she told me.