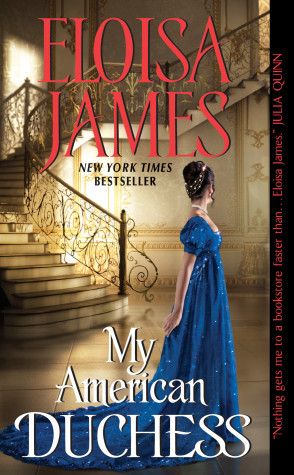 The arrogant Duke of Trent intends to marry a well-bred Englishwoman. The last woman he would ever consider marrying is the adventuresome Merry Pelford— an American heiress who has infamously jilted two fiancés.
But after one provocative encounter with the captivating Merry, Trent desires her more than any woman he has ever met. He is determined to have her as his wife, no matter what it takes. And Trent is a man who always gets what he wants.
The problem is, Merry is already betrothed, and the former runaway bride has vowed to make it all the way to the altar. As honor clashes with irresistible passion, Trent realizes the stakes are higher than anyone could have imagined. In his battle to save Merry and win her heart, one thing becomes clear:
All is fair in love and war.

English ladies never spoke to strangers, so he probably expected her to cower like a chambermaid. In that case, she would disappoint him. No American flinched before an Englishman, noble or otherwise.
Head high, she met his eyes straight on, and sure enough, a distinct flash of surprise crossed his face. “Please forgive me for disturbing you, sir,” she said, curtsying. “I mistook you for one of my countrymen.”
She could scarcely believe she’d felt pity for the man, because now she had the impression that she was sharing a small space with a large predator. She fell back a step with the aim of returning the ballroom, but he moved forward and blocked her flight.
“There are a great many Americans in London this season, are there not?” he asked.
Goodness sakes, the man was ferocious looking. It was difficult to imagine who would have had the nerve to affront him; in comparison, her combative former fiancé Bertie Pike was as placid as a cow.
He had made her so rattled that she spoke before she thought. “According to The Times, there are at least three times as many Americans in London as there were a decade ago.”
Her former governess, Miss Fairfax, had always said that no man wished to be thought ignorant, but Merry was certain that this man wouldn’t give a damn—because he was absolutely confident about what he did know.
Sure enough, he merely cocked an eyebrow and asked, “Did The Times offer an explanation for the swell in your numbers?”
“It did not. But did you know that Americans often study in your Inns of Court? Five men who signed our Declaration of Independence were educated at the Middle Temple.”
She nearly clapped a hand over her mouth. She had gone from inappropriate to objectionable; American independence was hardly a subject about which English aristocrats were enthusiastic.
She dropped a hasty curtsy. “If you’ll excuse me, sir, I shall go fetch my next dance partner.”
Laughter gleamed in his dark eyes. “If I might offer you some advice, no English gentleman wishes to be ‘fetched.’”
His evident amusement eased her nervousness. “My experience of London is not great, yet I have already discovered that there are any number of English gentlemen eager to be ‘fetched,’” she said, giving him a wide smile before she remembered that young ladies weren’t supposed to do more than demurely curl their lips.
“I surmise that you are referring to gentlemen who seek to enrich themselves by marrying a woman in possession of a fortune. Are there no adventurers of that kind in America?”
His tone made it clear that he was not a fortune-hunter. Merry had grown tired of gentlemen subtly informing her that they were willing to overlook her “unfortunate” nationality.
“Certainly there are,” she said. “But at home they aren’t so condescending. Here they act as if they’re doing one a favor, whereas to my mind the truth is quite the reverse.”
“You make a good point,” he conceded.
“Though I’m not being entirely fair. English gentlemen have titles for sale, and even my cousins—who are Cabots and quite powerful in their own right—don’t have anything attached to their name that directs people to bow and scrape before them.”
“I gather you are not inclined to bow and scrape before a titled gentleman?”
He didn’t seem in the least critical, which was a relief. “I am not. I prefer to judge a man on his accomplishments and character. If you have a title yourself, sir, I apologize for being so direct.”
He smiled, which she took to mean that he was untitled. “Have you met many peers…any dukes, for example?”
“I have met the Duke of Villiers, and just last evening, the Prince of Wales.” Merry lowered her voice to a whisper. “To be frank, each seemed to feel that his titles made him as special as a five-legged calf. Though, to be fair, the duke might expect reverence on the basis of his coat alone.”
His bark of laughter appeared to surprise him as much as it did her.
“Now if you will excuse me, sir, I must return to the ballroom.” Merry was fairly certain that Cedric had no concerns about her faithfulness, but there was no reason to cause a scandal by being caught in a tête-à-tête.

Excerpt: Say No To The Duke by Eloisa James

Review: Four Nights With The Duke by Eloisa James + Giveaway