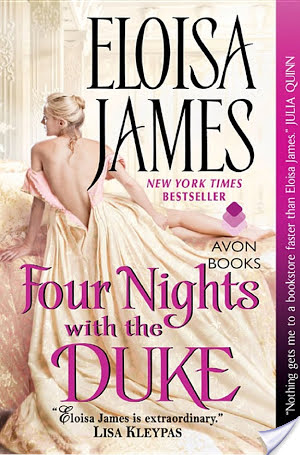 As a young girl, Emilia Gwendolyn Carrington told the annoying future Duke of Pindar that she would marry any man in the world before him-so years later she is horrified to realize that she has nowhere else to turn.

Evander Septimus Brody has his own reasons for agreeing to Mia’s audacious proposal, but there’s one thing he won’t give his inconvenient wife: himself.

Instead, he offers Mia a devil’s bargain… he will spend four nights a year with her. Four nights, and nothing more. And those only when she begs for them.

Which Mia will never do.

Now Vander faces the most crucial challenge of his life: he must seduce his own wife in order to win her heart-and no matter what it takes, this is the one battle he can’t afford to lose.

Emilia ‘Mia’ Gwendolyn Carrington is going to do something none of her heroines do, she is going to ask the duke to marry well, technically she’s going to blackmail him but lets not go there. Mia at the age of fiffteen had a crush on Vander, which ended up pretty badly to say the least and resulted in a outbrust; ‘she will not marry him even if he was the last man on England’. Mia wishes she could now take back….

Duke of Pindar Evander ‘Vander’ Septimus Brody has no plans to marry whatsoever especially after the fiasco related to his adulteress mother and a mad father. Vander is arrogant enough to believe that the reason Mia wants to marry is because of the said crush she had on him years ago. Which of course has no bearing why Mia actually wants to marry him but this lead to some pretty funny scenes.

I really enjoyed their relationship, especially the parts where Vander is completely surprised and dumbfounded by his wife. I was smiling every time they would bicker. Vander was pretty arrogant but you couldn’t help but like him. His parents marriage had a pretty bad impact on his views on women and marriage in general which Mia by being herself overcame. Mia was a wonderful heroine, a bit a naive when it came to her writing her heroines and her romance novels but she was also caring, intelligent and beautiful inside and out (no matter what she actually thought of her physical attributes).

Quibbles: I did want to smack Vander for his behaviour at times, especially near the end of the book but he came to senses soon enough. Maybe it was just me but some parts of the felt very modern-ish….

It was a fun, low on angst book with very interesting characters that you couldn’t help but love. I also loved Vander’s drunk uncle and his relationship with Mia. He was a romance novel fan, so how can you not love his enthusiasm and fangirling over authors :D.

Random thing that I liked: The mention of other romance authors and their books which is I suppose a nod to her fellow authors by the author herself.

Overall, this was a great and very charming historical romance book. Happy Reading!

Rafflecopter Giveaway (Print Bundle of the entire backlist of the Desperate Duchesses series, books 1 – 7, Including, Book 1: Desperate Duchesses; Book 2: An Affair Before Christmas; Book 3: Duchess By Night; Book 4: When the Duke Returns; Book 5: This Duchess of Mine; Book 6: A Duke of Her Own; Book 7: Three Weeks With Lady X)

A New York Times bestselling author, Eloisa James is a professor of English literature who lives with her family in New York, but who can sometimes be found in Paris or Italy. (Her husband is an honest to goodness Italian knight!) Eloisa’s website offers short stories, extra chapters, and even a guide to shopping in Florence. Visit her at www.eloisajames.com.

Excerpt: Say No To The Duke by Eloisa James