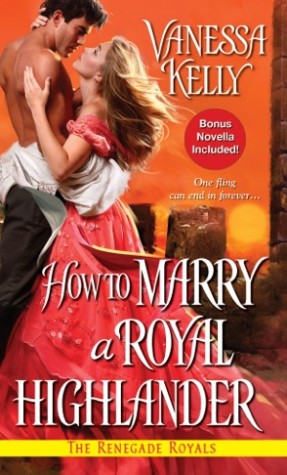 Illegitimate yet thoroughly irresistible, the Renegade Royals are leaving behind their careers as daring spies for the greatest adventure of all…

At sixteen, Alasdair Gilbride, heir to a Scottish earldom, fled the Highlands and an arranged betrothal. Ten years later, Alasdair must travel home to face his responsibilities. It’s a task that would be much easier without the distracting presence of the most enticing woman he’s ever met…

After one escapade too many, Eden Whitney has been snubbed by the ton. The solution: rusticating in the Scottish wilderness, miles from all temptation. Except, of course, for brawny, charming Alasdair. The man is so exasperating she’d likely kill him before they reach the border—if someone else weren’t trying to do just that. Now Eden and Alasdair are plunging into a scandalous affair with his life and her reputation at stake—and their hearts already irreparably lost…

A moment later, Dailey ushered Evelyn Endicott into the room. She halted when she saw Aden, but smoothly recovered, a warm smile curving her lush mouth. Alec got a jolt, both to his brain and to his groin. The latter was an unerring barometer when it came to one person in particular.
Goddammit.
The gorgeous young woman who’d just swept into his library was no more the wife of Wolf Endicott than Alec was the King of Spain.
“Mrs. Endicott, what a pleasure to see you,” Aden said with a bow.
The faux Mrs. Endicott dimpled up prettily and returned his greeting with a brief curtsey. “And you, Captain St. George, although I see I interrupted your meeting. Please forgive me.”
She cast what she no doubt thought was a shy, apologetic glance at Alec. He raised an eyebrow and crossed his arms over his chest. Her brows, partly hidden by her spectacles, tilted down in a frown.
But a moment later she was directing another charming smile at Aden, who seemed completely taken in by her silly charade. Alec almost laughed out loud at the notion of the outrageous Eden Whitney pulling the wool over the eyes of England’s most accomplished spy.
“No apology necessary, Mrs. Endicott,” Aden said. He nodded to Alec. “I’ll speak with later.”
Alec answered his cousin with a polite smile, enjoying the prospect of mocking him at a later date. But when Aden reached the door, he glanced over his shoulder, his eyebrows raised and his gaze glinting with laughter.
Clearly, the little minx hadn’t fooled Aden, after all.
The woman who was fast becoming the bane of Alec’s existence flashed him what she probably thought was an innocent, shy smile. It was nothing of the sort, of course. Eden Whitney exuded a mostly unconscious sensuality that could knock a man flat from twenty paces.
“I’m sure you must be surprised to see me,” she said in a sweet, quiet voice.
He had to admit she got the voice right. If he hadn’t been looking straight at her, he would have thought he was listening to Evie and not her diabolical twin.
“Give it up, Miss Whitney.” He took her by the elbow and steered her to one of the club chairs. “You’re not fooling anyone.”
She gaped up at him with astonishment. “Confound it, how do you do that? I haven’t been in the room for more than a minute.”
It wasn’t the first time Edie had switched identities with her twin, but it hadn’t worked any better with him this time than it had a few months ago. There were a dozen differences between the sisters, some quite noticeable. For one, Edie carried herself with a degree of confidence and restless energy her twin lacked. She cut a swath through the ton like a sharpened sickle through a field of ripe wheat.
There were more subtle signs as well, like the way her clothes hugged her generous curves just a little more snuggly than her sister’s. She might think she was fooling him by choosing a modestly cut carriage dress in dove gray, but Edie’s sense of dash always seemed to bleed through. No cautious ponderings or sober second thoughts for Miss Eden Whitney. To her, life was a challenge and a lark, something to be enjoyed to the hilt.
“Never mind that, you daft woman,” he said. “Have you no care for your reputation?”
She let out a disdainful snort. “Reputation? That’s rich, coming from you. You’re constantly doing outrageous things.”
“I’m a man. I can get away with it. You, however, cannot.”
“It’s so unfair,” she grumbled.

Vanessa Kelly is an award-winning author who was named by Booklist, the review journal of the American Library Association, as one of the “New Stars of Historical Romance.” Her Regency-set historical romances have been nominated for awards in a number of contests, and her second book, Sex and The Single Earl, won the prestigious Maggie Medallion for Best Historical Romance. Her current series, The Renegade Royals is a national bestseller. Vanessa also writes USA Today bestselling contemporary romance with her husband, under the pen name of VK Sykes.