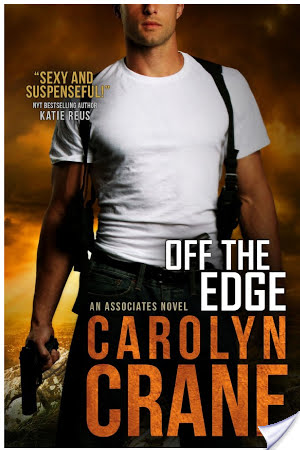 ~ Winner of the 2014 RITA Award for Best Romantic Suspense ~ ~ Named a 'Desert Island Keeper' at All About Romance ~  "One of the very best romantic suspense novels I read this year." ~Dabney, ThePassionateReader.com "Off the Edge is such a well-crafted romantic suspense story. Full of action and sparkling chemistry between Laney and Peter, this book is so much fun to read." ~USA Today

SHE MAY BE HIS WORST ENEMY…

For deadly secret agent Peter Macmillan, language is a weapon—one he uses to hunt criminals, destroy plots, and charm enemies. Seducing information out of a beautiful singer in a Bangkok hotel should be easy…except this singer has the power to destroy his cool façade, and with it, his last defense against a dark past.

HE MAY BE HER ONLY HOPE…

He tricked her. He helped himself to her body and her secrets. He has enemies everywhere. Laney Lancaster should hate Peter, but when she discovers him shirtless, sweaty, and chained up in the hotel’s dungeon, all she can think about is freeing him. Because she knows what it’s like to be trapped and alone. And she could use a dangerous friend.
They might be wrong for each other, but the instant they join forces, Laney and Peter are plunged into an odyssey of hot sex and dark danger. To survive, they must trust each other with their lives—and their hearts.

My binge reading of romantic suspense continues. I read two Carolyn Crane’s books from her the Associates series. I started from the second book because it had kind of a nerdy hero which is what I was looking for at the time.

Peter Macmillan is an agent from the Associates, he used to a be a professor however after the death of his fiancee and his parents this all changed. He started using his power of linguistics to identify the individual responsible for the death of his family which lead him to becoming part of the Associates. Now he’s after a guy that has a weapon that can destroy millions of people and on this mission he meets Laney. Laney Lancaster is a singer/songwriter who sings in a hotel club in Bangkok, she is also, on run from her abusive ex. When will meet, the both have this instant connection to each other and everything about laney from her song lyrics to her personality speaks to Peter, more importantly it speaks to the guy he used to. I loved these two together. Both of them were running from something and ultimately towards each other.

What I liked: I really enjoyed the book, maybe it was because of the linguistics aspect that was included in the book as well the romance and the suspense which was all done very well. This was one of those unique stories thats different from others out maybe because of the hero, Peter and the heroine, Laney are both unique and wonderful themselves and so is their romance. The action, suspense and the secrets made the book even more interesting.

What I didn’t like: One of the things I love about stories with agents or military types is the bond that keeps them together, the friendship and caring for each other. The two heads of the Associates while fascinating, make a decision about Peter, who they both individually know that made up me unhappy with them. But I’m glad Peter had friends in the Associates to be there for him. Lastly, Laney should really trust her instincts and when Peter told her to run or something she wouldn’t, one of those times she saved Peter, the others not so much which made me slightly annoyed at her.

Her books have been published by Random House and Samhain; these days, this perfectionistic control-freak of an author likes to indie publish. She lives in Minneapolis with her husband and two cats and works a straight job as a freelance marketing writer. During rare moments when she’s not at her computer, she can be found reading in bed, running, or helping animals.