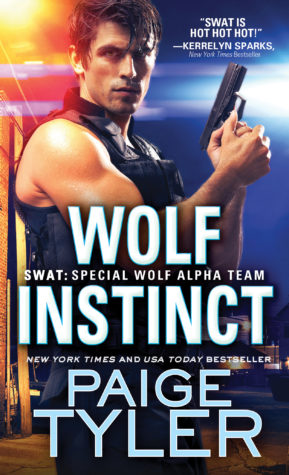 He's a wolf shifter.
She hunts monsters.
How can she be The One for him?

SWAT werewolf Zane Kendrick will do whatever it takes to take down the man who attacked his pack. His search takes him to Los Angeles, but when he meets Alyssa, the smart, sexy agent who comes to his aid, he’s immediately interested in pursuing more than just the next lead. All his wolf instincts tell him that she’s The One.

FBI agent Alyssa Carson has investigated some weird stuff lately, and finding missing people drained of their blood definitely falls into that category. When following a clue leads her to Zane, she agrees to work with him and his team. She’s attracted to the gorgeous Brit, but she doesn’t have time for anything but finding answers.

When Zane and Alyssa discover the sinister truth, it’ll take everything they have to make it out of this mission with their lives—and hearts—intact.

Check out an all new excerpt and enter the giveaway below!!

“Yeah.” She smiled. “The pay isn’t the greatest and I practically live in hotels, but I love what I do.”

“That’s what’s important.” Zane leaned forward, resting his forearms on the table. “I am curious how you find time for anything resembling a social life since you’re never in one place very long.”

She snorted, remembering how Christine had ragged on her about this same subject. “Social life. What’s that? As far as I’m concerned, if the FBI wanted me to have a social life, they’d issue me one, like my sidearm and badge.”

Zane lifted a brow. “Are you saying that a woman as beautiful as you hasn’t gone on a date with anyone in a year and half?”

Coming from anyone but Zane, that question might have irritated her. But for whatever reason, it didn’t. She especially liked the compliment. “While I’m not going to come out and put an exact time frame on it, I’ll admit it’s been a while. But if we’re going to discuss our social lives, how about you? Don’t tell me a big, good-looking man like you isn’t involved with someone.”

Zane’s gaze turned molten in the sun coming through the window and she felt her stomach do that funny flutter thing that had only started happening after they’d met. “If I were involved with someone, do you think I would have kissed you like I did last night?”

He lifted his mug and took a long, slow sip of coffee. “No, I wouldn’t have. I’ve dated a few women since moving to Dallas. Probably more than a few, I guess. But it never felt right with any of them, and after a while, it didn’t seem worth the effort. Then I met you and everything felt different. That’s why I kissed you.”

She’d just been messing with him about kissing her if he was involved with someone. His response was a lot more real than she’d expected. The part about why he’d kissed her made her warm all over. But the stuff about him not connecting with anyone since leaving London hurt more than she would have thought possible.

“You broke up with your fiancée a long time ago,” she pointed out. “Are you saying that in all that time, you never met anyone you could see yourself falling for?”

He didn’t answer at first, pausing to slowly chew his Pop-Tart. When he did finally answer her question, he kept his gaze fixed on the mug in front of him. “This probably won’t make much sense, but for people like me, it can be difficult finding that perfect person we’re supposed to be with. Some might even say it’s impossible.” The words were so soft she had to lean forward to hear them. “When the woman I thought was the right one for me walked out, I didn’t think it could happen again. But since meeting you, I’ve started thinking maybe I gave up too soon.”

Alyssa didn’t know what to say. It wasn’t a declaration of love or anything, but still…

Picking up her mug, she got up and poured herself more coffee. She held the pot up in Zane’s direction, but he shook his head. She didn’t necessarily want a refill, but it gave her a chance to think about everything he’d said. The guy had just unleashed a lot. It would take a while to absorb it all.

Like those three simple but significant words: people like me. Just that fast, the big, sexy Brit had confirmed he was different. Surprisingly, that acknowledgment didn’t bother her as much as she thought it might. While she’d discounted the possibility of him using some kind of spell on her, part of her wondered if Zane was putting out some kind of supernatural pheromone to attract his victims with and make them easier to subdue. But one look at him sitting at the table chewing thoughtfully on his frosted brown sugar Pop-Tart made her toss that ridiculous idea right out of her head. Zane didn’t need to put out any pheromones to lure her in. All he had to do was look at her.

She shook her head. One smile from him and she was ready to throw caution to the wind. Was she really that easy?

Alyssa walked back over to the table with her coffee, thinking about the other stuff Zane had said—especially the part where he’d confessed he’d given up on the idea of finding someone until meeting her. She’d never thought of herself as the kind of woman who cared about romantic drivel, but when Zane said those words, she had to admit there’d been some serious feels going on. Part of her wanted to wrap her arms around him and hug him. The other part wanted to throw him on the floor and bang him like a cheap screen door—but that part was only making noise because it had been so long since she’d gotten laid.

“So,” she said, ignoring her chair and instead sitting on the edge of the table right in front of Zane. “I’m guessing you think I might be this perfect someone you’d given up hope of ever finding? Do you mind if I ask what makes you think that?”

Zane pushed his chair back a bit to make room for her, his dark eyes meeting hers. “You’re not going to like this answer, but…it’s complicated.”

He was right. She didn’t like it. “You’re going to have to do better than that.”

“Let’s just say the first time I saw you at that club, taking down Stefan’s goon, I knew you were someone special. And even though I’m still not sure if I’m comfortable with the idea—actually, I’m downright terrified—I’m also sure you’re The One for me.”

That sounded so romance-bookish Alyssa almost laughed out loud. The serious expression on Zane’s face was the only thing that stopped her. It might be crazy as heck, but the big, sexy hunk seemed to genuinely believe it.

They sat there looking at each other, Alyssa cupping both hands around her mug, breathing in the warm coffee while Zane seemed to be holding his breath like he thought she might bolt for the door at any second. Which was crazy since this was her room.

“Okay,” she said, setting her mug on the table. “Assuming you’re right and I’m The One for you, what do we do now?”

His big hands were coming up to wrap around her hips, tugging her forward off the table and onto the chair with him until she was straddling his thighs. As sexy as that position might be, Alyssa couldn’t help laughing. “Seriously? That’s the movie line you’re going with to get into my panties?”

Zane buried his fingers in her hair, tugging her mouth closer to his. Just before their lips met, he flashed her that thousand-watt smile, which made her pulse skip a beat. “I don’t know,” he murmured, his coffee-scented breath warm on her skin. “Did it work?”

Alyssa hadn’t realized exactly what she’d said—about getting into her panties—until right then. But as she gazed down at Zane and his beautiful smile, she decided letting him have his way with her unmentionables sounded like a really good idea. After that, who knew what she might let him get into?

She didn’t bother to answer his question. Instead, she lowered her mouth to his and kissed him hard enough to pull a growl out of him. And what an interesting growl it was, rumbling up through his chest and straight into her open mouth, making little tingles and shivers dance all over her body.

Apparently, she was into guys who growled.

PAIGE TYLER is a New York Times and USA Today bestselling author of sexy, romantic fiction. Paige writes books about hunky alpha males and the kick-butt heroines they fall in love with. She lives with her very own military hero (a.k.a. her husband) and their adorable dog on the beautiful Florida coast.

Guest Post with Author Paige Tyler and a Giveaway