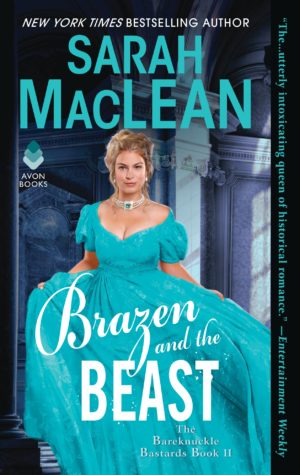 Brazen and the Beast by Sarah MacLean
Series: The Bareknuckle Bastards #2
Published by Avon on 30th July 2019
Genres: Historical, Regency
Pages: 400
Format: eARC
Source: the publisher
Buy on Amazon US, Buy on Amazon UK, Buy on Kobo, Buy on itunes

The Lady’s Plan
When Lady Henrietta Sedley declares her twenty-ninth year her own, she has plans to inherit her father’s business, to make her own fortune, and to live her own life. But first, she intends to experience a taste of the pleasure she’ll forgo as a confirmed spinster. Everything is going perfectly…until she discovers the most beautiful man she’s ever seen tied up in her carriage and threatening to ruin the Year of Hattie before it’s even begun.
The Bastard’s Proposal
When he wakes in a carriage at Hattie’s feet, Whit, a king of Covent Garden known to all the world as Beast, can’t help but wonder about the strange woman who frees him—especially when he discovers she’s headed for a night of pleasure . . . on his turf. He is more than happy to offer Hattie all she desires…for a price.
An Unexpected Passion
Soon, Hattie and Whit find themselves rivals in business and pleasure. She won’t give up her plans; he won’t give up his power . . . and neither of them sees that if they’re not careful, they’ll have no choice but to give up everything . . . including their hearts.

Will preface this with saying I generally really love Sarah MacLean’s books and her writing. She is one of my favourite historical romance authors and I’ve reread some of book multiple times. I didn’t really enjoy the first one of the series, but I wanted give this series another shot. I think I’m in the minority of this one, my friends really seem to be enjoying this series.

What I loved: Henrietta ‘Hattie’ Sedley is a great character, she is rather unusual woman for her time period, she wants to gain control of her father’s business and so she embarks on the mission to do so with her Year of Hattie plan. She’s practical and brazen. She’s a go getter, she’s ambitious and I really liked that about her. Saviour ‘Whit’ Whittington is also a likeable guy, he’s a bastard son of a duke and known for his fighting abilities. He’s also not a very talkative fellow. I just didn’t understand how his reputation contrasted with how he is with Hattie.

I did also like them together. The banter, the couple, and the secondary characters were all good.

What I didn’t like: I’m not really a person who hates insta love in romance but it has to work, here it just didn’t for me.

Also the whole revenge part just left recycled from the last book which is where my enjoyment suffered a lot. I don’t know what exactly is missing in these books but with the added revenge only motivator and with me wanting my H/h wanting something to come about their way because of what they do themselves do, it left like a let down and then the end left very rushed.

I’m uncertain right now if I want to read Ewan’s story, Grace and Ewan show a lot of promise however so I’m conflicted.

Overall, it’s more or less a decent read, I just had higher expectations I guess. It does have it’s good parts and a lot of people seem to really enjoy this so do give it a shot and see for yourself.