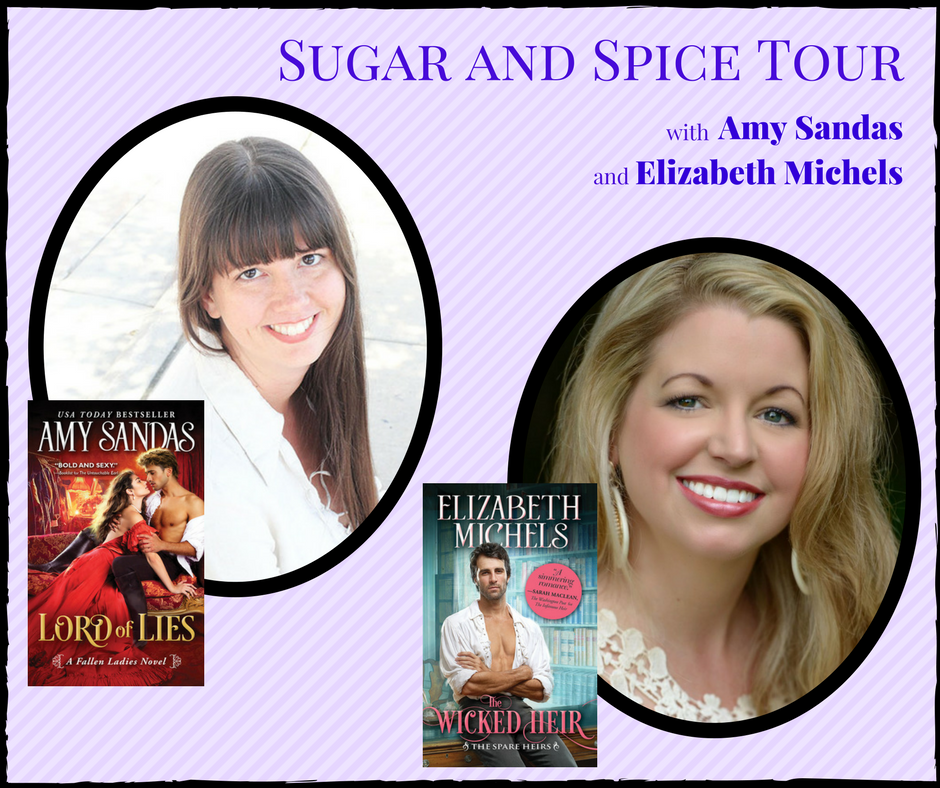 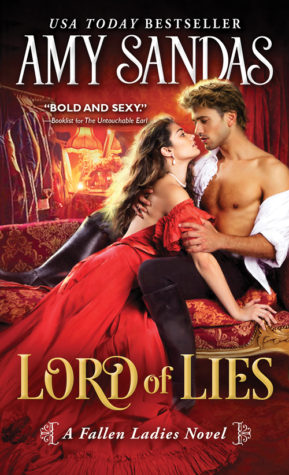 Lord of Lies by Amy Sandas
Series: Fallen Ladies #3
Published by Sourcebooks Casablanca on 4th July 2017
Buy on Amazon US, Buy on Amazon UK, Buy on Kobo, Buy on itunes, Buy on B&N

"You do strange things to me, Dell Turner. Tell me I am not alone in what I feel."His voice was low and rough. His eyes burned. "You are not alone," he said.
Portia Chadwick knows she'll never have a life of adventure. But when a dangerous moneylender kidnaps her sister, Portia seeks help from a man known only as Nightshade. Soon she finds herself charging headfirst into his world of intrigue and danger―and unexpected passion.
Dell Turner grew up in London's back alleys and gin lanes. Vowing to escape his low beginnings, he hires himself out to society's elite. When he accepts a job from a beautiful young lady, he doesn't anticipate her relentless determination to join his mad occupation...or her unnerving ability to inspire emotions he thought long buried. She's as dangerous to him as his world is to her, and yet Dell can't bring himself to turn Portia away... even if it means risking her life. 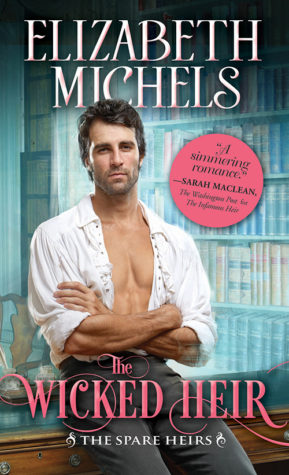 The Wicked Heir by Elizabeth Michels
Series: The Spare Heirs #3
Published by Sourcebooks Casablanca on July 4th 2017
Pages: 448
Buy on Amazon US, Buy on Amazon UK, Buy on Kobo, Buy on itunes, Buy on B&N

The Spare Heirs Society Cordially Invites You to Meet Fallon St. James: The Mastermind
When the love of Lady Isabelle Fairlyn's life is betrothed to her twin sister, Isabelle vows to find a suitable replacement before the end of the season. He must be a talented dancer, have a keen fashion sense, and be perfectly dashing in every way.
Fallon St. James is the farthest thing from perfectly anything. As head of the secretive Spare Heirs Society, he must stick to the shadows...even as Isabelle's friendship pulls him reluctantly into the light. But when Isabelle gets involved with the one man who could destroy Spares, Fallon must decide between protecting his life's work―or risking everything to save the woman whose warm smile leaves him breathless.

Amy: If you could be a character in any movie, which movie and what character would you want to be?

Elizabeth: Without a doubt I would want to be Mia Thermopolis in The Princess Diaries! She gets to learn to be a princess. I mean, twist my arm, right? Torture me with makeovers and learning to properly sip tea any day. I won’t complain even a little. Mia Thermopolis has the bright future of one day ruling Genovia which looks a great deal like one of the countries in Epcot. Again, it would be complete torture
to have that to look forward to. 😉 And bonus—my grandmother would be Mary Poppins. Not too shabby.

Amy: What was the first romance novel you ever read?

Elizabeth: I’ve always been one to have a book around, but I read across multiple genres without any particular favorite until about 12 years ago. Whatever book caught my eye or was popular enough to make into a movie, I would pick it up, and dive into it without hesitation. I blame this entirely on growing up in the country. In a home where my only choices in books were my brother’s science fiction novels, and my mom’s cozy murder mysteries, I was just happy to have something to read, anything to read. Then when I was in my late 20s, I walked into my local bookstore and saw a book with a cover depicting a ship at sea. Bold blue skies, sails billowing in the wind, and a lady in a pink dress all seemed to beg me to pick up the book to investigate. It was Johanna Lindsey’s CAPTIVE OF MY DESIRES. That was the day I dove into historical romance novels, and I’ve never looked back.

Elizabeth: I only listen to classical music and theme songs from movies while I’m writing because of the lyrics. If I listen to a song with words, I stop writing to sing along, using the stapler on my desk as a microphone. Yes, I discovered I have this problem the hard way. I do, however, have inspiration music for each book. I listen to it while I’m sipping my coffee or I’m in the car. For THE WICKED HEIR, I listened to a mix that included the acoustic version of Everlong by the Foo Fighters, Everything Has Changed by Taylor Swift, Someone Like You by Adele, Crash Into Me by Dave Matthews, She Will Be Loved by Maroon 5, and a random selection of songs from Disney movies. I blame my heroine, Isabelle, who is a bit of a princess for that last part.

Amy: If you had only one book to read for the rest of your life, what book would it be?

Elizabeth: Only one book?! Forever?! Man, ask me a tougher question, why don’t you, Amy. Geez! I would have to go with the book that will always hold a special place in my heart: the one that hooked me on reading when I was a teenager. There was a long list of acceptable books for summer reading that year. I wasn’t a big reader at the time, so I sighed and looked down the list settling on a title that turned out to be AMAZING! After I read it, I wanted more and began devouring book after book for the first time in my life. But that first one is still my favorite book of all time. The book that changed my life: REBECCA by Daphne Du Maurier

Amy: What author has been the greatest influence on your writing?

Elizabeth:There are so many authors I love to read, and authors I admire and for various reasons. My number one favorite author though has to be Lisa Kleypas. Her writing is beautiful! I love her descriptions and the characters she creates are amazing. Every time I finish one of her books I sit there for a second in awe, hoping I can make a reader feel the same way I do in that moment. For me, her books are the light house on the horizon that I steer my little boat toward. I hope I hit land one day and I get to meet her in person. That would be awesome!

Elizabeth: Oh, goodness! What a question! LOL I would choose Ethan Moore, Lord Ayton (THE INFAMOUS HEIR) to be my brother. He’s a great brother to his sister, Katie. And I know if something went wrong in my life, he would have my back and would be the first one there throwing punches in my defense.
I would marry Fallon St. James (THE WICKED HEIR) in a heartbeat! He’s a kind, generous, and powerful man in London. He lives in the elegant, flower-filled Headquarters for the Spare Heirs Society. He’s…let’s be honest…the Godfather of the mafia, which is cool. And he would be the one most likely to laugh it off when I do something impulsive and creative around the house. And that makes Ash Claughbane (THE REBEL HEIR) my lover. Ash is adventurous, and fun. He travels a good bit, so I think he would be a nice wild fling when he comes through town. Of course, I think the heroines of the Spare Heirs series would have a problem with me stealing their men, so I’ll just stick with the husband I have. He’s pretty awesome too.

Elizabeth: What’s your favorite line from your new release, LORD OF LIES?

Amy:͞He knew before he spoke, however, that a sensible lecture would only end in a roll of her fascinating eyes or a snort of derision before she went along doing exactly what she wanted to do anyway.͟

Elizabeth: Let’s talk movies. What’s the last movie you saw in the theater? What’s your favorite movie? What movie are you embarrassed to admit that you love?

Amy: Last movie seen in the theater was the live-action Beauty and the Beast with my twelve-year old daughter. My favorite movie is constantly changing. Right now, it’s Wonder Woman. A movie I’m embarrassed to love—Bedazzled with Brendan Fraser and Elizabeth Hurley.

Elizabeth: If you had to live within the world of any genre of romance, which one would you choose and why?

Amy: I’d have to go with contemporary. Specifically, the gritty, rock-and-roll, tattooed, dive bar contemporaries. Oh, to be young and rebellious again!

Elizabeth: Do you have any book release day traditions?

Amy: You mean aside from biting my nails and scanning the internet for reviews every five minutes? As someone who loves food and honestly gets sick of cooking every night, getting dressed up and going out to a nice restaurant is my favorite way to celebrate a new release.

Elizabeth: Do you think there’s a secret ingredient that all heroes must have to be desirable? Or does that magic ͞it͟ factor change from book to book?

Amy: I definitely think it changes from book to book. To me the ͞it͟ factor is in how the hero is perfect for his particular heroine. It’s in the little details she notices when she first sees him and the way his presence makes her feel.

Elizabeth: Which heroine in your books is the most like you?

Amy: Ooh! Tough question. But I would probably have to say it is Lily Chadwick. I have always been very shy, though I’ve learned how to fake it in most situations. And like Lily, I prefer to avoid conflict if possible.

Elizabeth: What’s your go to music when you need some inspiration for your books?

Amy: I most often go to music that is more atmospheric rather than something with lyrics. So… Scottish bagpipe music, or something classical. Or soundtracks from epic movies like Last of the Mohicans or Legends of the Fall.

One lucky winner will receive a book bundle containing all three books in each author’s latest series!

USA Today Bestselling author Amy Sandas’s love of romance began one summer when she stumbled across one of her mother’s Barbara Cartland books. Her affinity for writing began with sappy preteen poems and led to a liberal arts degree from the University of Minnesota Twin Cities. She lives with her husband and children near Milwaukee, Wisconsin.