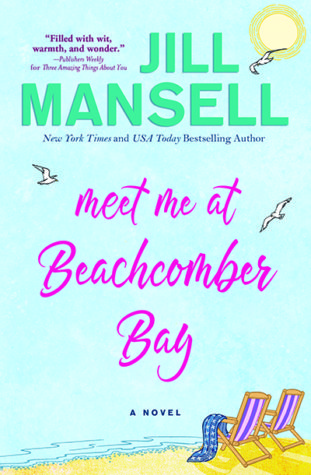 Meet Me at Beachcomber Bay by Jill Mansell
Published by Sourcebooks Landmark on May 2nd 2017
Genres: Contemporary, Romance
Pages: 448
Buy on Amazon US, Buy on Amazon UK, Buy on B&N

International bestseller Jill Mansell weaves a heartwarming tale of love, family and friendship in her latest novel
1. A brief encounter that could have become so much more...if only everything were different2. Step-sisters, bitter rivals in every area except one--by unbreakable pact neither will ever steal a man from the other3. A love triangle that starts out as a mess of secrets and mix-ups, and only gets worse from there
Plus!Friendship, family ties, crossed wires and self-discovery, second chances and first impressions
Welcome to Jill Mansell's blustery seaside world. Once you step inside, you'll never want to leave!

Sometimes it only takes a split second for a state of absolute calm to turn to one of horror and panic.
“Oh dear, poor thing.” Clemency turned to watch as a purple-faced businessman in a too-tight suit hurtled across the concourse at Malaga airport in the direction of the departure gates, panting and grunting as he ran and scattering small children in his wake.The British girl who was working at the Chanel stand in duty-free said, “Honestly, it’s amazing how many people don’t bother to pay attention to the boards. Yesterday there was a party of fifteen Spanish guys in one of the bars, and they were so busy watching a football match on TV that they ended up missing their flight. Imagine!”“That’s crazy,” Clemency marveled, trying a purple eyeshadow shot with gold sparkly bits on the back of her hand. Nice.“Oh, we see everything here. So many people don’t even turn up at the airport until their flight’s about to close.”“I couldn’t do that. I always like to give myself loads of time. Then I know I can really relax,” Clemency said happily, “and spend ages in duty-free trying out all the makeup.”

Which was why another forty minutes had passed before she finally arrived at the checkout to pay for the new lipstick she’d chosen, because these things took time, and choosing the perfect lipstick was important.

The bored-looking cashier said, “May I check your boarding pass, please?”

Clemency glanced down at her left hand, the one that should have been clutching her passport. The passport with the boarding pass neatly tucked inside it.

She looked down at the hand and saw that it was clutching instead a handful of perfume card samplers, each one sprayed with a different scent.

And that was the moment absolute calm turned to horror and panic.

“Just in time,” said the female attendant as Clemency hurtled toward the departures desk. “We were about to close the gate!”

Clemency couldn’t speak. She wanted to fall to her knees and gulp air into her burning lungs, but there was no time; she was already being ushered out through the sliding doors and across the tarmac toward the waiting plane. Her drag-along case was banging against her ankles, perspiration was trickling down her spine, and her mouth was dry as she struggled up the clanky metal steps, still hyperventilating. Oh God, she could only imagine the color of her face. She must be puce.

The male flight attendant greeted her with a wink. “Nice of you to decide to join us. Welcome on board.”

You know that little inner surge of triumph you get when you’re on a packed-to-the-gills plane, and everyone’s boarded, and the seat next to yours is magically still empty…until at the very last minute someone else gets on and you realize you won’t be enjoying the luxury of having an empty seat beside you after all?

This, Clemency knew, was the feeling currently being experienced by the passenger occupying seat number 45A. As she made her way toward 45B, she could almost hear the thud of disappointment and his accompanying sigh of resignation.

Oh well. His hopes might have been cruelly dashed, but on the upside, he had excellent cheekbones and a beautiful mouth. During her flight over here, the guy in the seat next to hers had weighed almost as much as the plane itself and had been eating tuna sandwiches, so this one was already a marked improvement.

Still getting her breath back, Clemency smiled broadly at him. “I know, I’m sorry. I’d be disappointed too.”

This was the man’s cue to relax, to notice that as far as seat neighbors were concerned he could do an awful lot worse, and to gallantly offer to lift her heavy case into the overhead bin.

Except this didn’t happen. Instead, he acknowledged her with the briefest of nods before returning his attention to the phone in his hand.

Then again, she had looked better. Maybe a red-faced, perspiring twenty-five-year-old gasping for breath wasn’t his cup of tea.

Case stowed and bin closed, Clemency collapsed into her seat, wiped her face and hands with a tissue, and examined her left foot where the wheels of her carry-on case had repeatedly bashed against her ankle. She exhaled noisily. “I can’t believe I almost missed my flight! I always make sure I leave loads of time so nothing can go wrong. All these years, and it’s never happened before…but I suppose the thing is, something always can go wrong. Like today. You can’t imagine how I felt when…umm…”

She trailed to a humiliated halt when she realized the man was determined to ignore her. Nothing, not a flicker; he clearly wasn’t interested at all.

He might have a beautiful mouth and excellent cheekbones, but he had no intention of engaging in conversation with the stranger at his side.

Fine. Clemency ostentatiously took out her own phone and began to check her emails. Because look at me, I’m really busy and important too.

Half an hour later, once they were flying at thirty-six thousand feet over the Pyrenees, two of the cabin crew brought the drinks cart down the aisle, and her traveling companion removed his earbuds in order to speak to them.

“I don’t believe it.” Clemency laughed at her own stupidity. “I’m such an idiot!”

The man turned to look at her. “Sorry?”

“You! Those things!” She gestured to the earbuds in his right hand. “I was chatting away to you earlier and you completely ignored me, so I stopped talking because I thought you didn’t want to be disturbed. I couldn’t see the wires from here because of the way you were sitting, and your collar covered them up. But I can’t believe I didn’t realize the reason you were ignoring me was because you had headphones in.” Giddy with relief, she added, “Well, I suppose I was in a bit of a state, what with almost missing the flight… My brain felt as if it’d been whizzed up in a blender… Oh dear, sorry, that sounds a bit—”

“Certainly, sir. And you, madam? Would you like something from the cart?”

It was free. Free wine! Why would anyone say no? Except Clemency had observed on plenty of occasions that some people, for mystifying reasons of their own, did sometimes say no.

Ha, not her, though. She said, “I’d like white wine, please. Oh…is it cold?” Because sometimes it wasn’t.

The flight attendant wrinkled her nose conspiratorially and said, “Not very, I’m afraid.”

“I’ll have red then.” Clemency smiled. “Nothing worse than lukewarm white wine.” The next moment, seeing that her traveling companion was about to put the buds back into his ears, she added, “I think I deserve a drink to celebrate not missing this plane!”

“There you go.” The attendant passed them their mini bottles and plastic glasses, along with two airline-size packets of cheese crackers.

“Lovely. Thank you.” Clemency filled her glass, raised it toward the man next to her, and said, “Cheers!”

“Cheers,” murmured the man before glancing back at his phone.

Sometimes persuading someone to make conversation when they didn’t want to became a kind of personal challenge. Before he could plug himself back into his music, Clemency said brightly, “Doesn’t it always feel brilliant, having a glass of wine on a plane?”

“It does.” He looked pointedly out the window.

“I wasn’t late getting to the airport, you know,” Clemency told him. “I had tons of time, which was why I spent ages in duty-free, and it wasn’t until I reached the checkout that I discovered I’d put my passport down somewhere, and for the life of me I couldn’t think where I’d left it. Oh God, that feeling, though.” She clenched her free hand and clutched it to her chest at the awful memory. “My heart was going like a train, I was trying to ask where it might have been handed in, and everyone in the line behind me was getting annoyed because all they wanted to do was pay for their duty-free…”

For the second time, Clemency’s voice trailed off, giving him the chance to join in and say, “So what happened next?” Instead, after an awkward silence that seemed to last longer than Wagner’s Ring cycle, he replied, “But you found it.”

“Yes. Yes, I did.” Clemency nodded and looked at the buds he was clearly longing to plug back into his ears. Carefully raising the tray in order to get out of her seat before lowering it again and resting her glass of wine on it, she said, “Excuse me,” and escaped down the aisle.