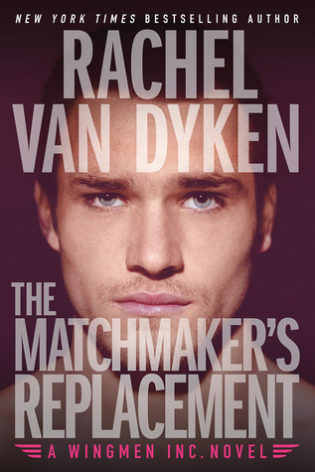 Wingman rule number two: never reveal how much you want them.

Lex hates Gabi. Gabi hates Lex. But, hey, at least the hate is mutual, right? All Lex has to do is survive the next few weeks training Gabi in all the ways of Wingmen Inc. and then he can be done with her. But now that they have to work together, the sexual tension and fighting is off the charts. He isn’t sure if he wants to strangle her or throw her against the nearest sturdy table and have his way with her.
But Gabi has a secret, something she’s keeping from not just her best friend but her nemesis too. Lines are blurred as Lex becomes less the villain she’s always painted him to be…and starts turning into something more. Gabi has always hated the way she’s been just a little bit attracted to him—no computer-science major should have that nice of a body or look that good in glasses—but “Lex Luthor” is an evil womanizer. He’s dangerous. Gabi should stay far, far away.
Then again, she’s always wanted a little danger.

So I mentioned reading the Matchmaker’s Playbook in my monthly round up and I really enjoyed that one but this one…I loved it! Maybe its because of the enemies to lovers trope which I happen to love or because of how freaking adorable they both were.

I finished reading this at 5 something AM and I don’t regret it one bit. I was very excited but nervous when I started because I didn’t know what to really expect but this was just fun to read. This review is random, with me mostly just talking about the things I liked.

I loved the protagonists individually and together.

Lex “Luthor” evil genius extraordinaire has had a thing for his best friends best friend/like a sister Gabi for years. Of course, she thinks he is a complete ass to her for no reason and is a whore (though the latter is true). He is also the partner of Ian in their Wingmen Inc company. Lex likes to designate everything to its specific, the only who doesn’t fit into any is Gabi.

Twenty-four hours ago, I was a normal, sane— albeit teetering on the edge of crazy— guy. Now? Now, I was headfirst in crazyland…~Lex.

Gabrielle “Gabi/Sunshine” Sava really needs the job of being part of the Wingmen Inc. Gabi has been best friends with Ian (with Lex also hanging about) since they were children but then Lex moved away. But everything between them changes during fresheman year when they meet once again at a party which ended up with Lex and Gabi becoming archenemies.

I lied. I lived to irritate him. It kept the line between us firmly in place. The universe balanced.~Gabi.

Honestly I loved their arguments and their yearning at the start. It was obvious from the last book that they had a thing for each other more than hate especially when Lex goes to take care of sick Gabi. They also had undeniable chemistry.

“Arguing. You can’t help yourself.”

I also really liked the fact that Lex didn’t change from who he was. Lex was an asshole, a perv and he probably always will be. He didn’t become this new person when he finally stopped holding back. He was still Lex just more openly in love, saying what he thought instead of making up lies and trying to just piss of Gabi. I found his thoughts hilarious at times and I enjoyed his nerdy moments.

I did not do well with change. Chameleons should all burn. Anything that could roll with the punches pissed me off. Damn lizards.~ Lex.

We also get to see a more vulnerable side of Lex because of the fact that he really loves and needs his best friend Ian and at the same time he also had feelings for Gabi which made everything really difficult for him.

I loved that Gabi never backed down from Lex, if he stepped things up so did she. Gabi was a great lead, her struggles and her trying to help out her family was touching. She was just genuinely nice person apart with Lex who made her crazy but that was mutual so…

“I should buy stock in aspirin, that’s how often I get headaches after hanging out with you.”~Gabi.

I just really loved the way they were together, it took some time but they were both honest and trying to make it work. The reason why Lex calls Gabi sunshine was cuteee. Their whole relationship was just very fun.

Their sneaking about and fighting scenes were pretty funny as was Ian, unable to handle even a hint of Gabi being in any sexual relationship.

“You look . . .” Ian’s eyes narrowed. “You’re seeing the guy again, aren’t you? The one who stole your treasure!”~Ian to Gabby.

It was just a joy to read, I laughed out loud few times, smiled almost the entire way through. Wanted to smack Lex like Gabi did at times and ended up really loving the couple. And the nerd in me also loved all the superhero references. The book just made me happy!

Excerpt and Giveaway: The Matchmaker’s Replacement by Rachel Van Dyken