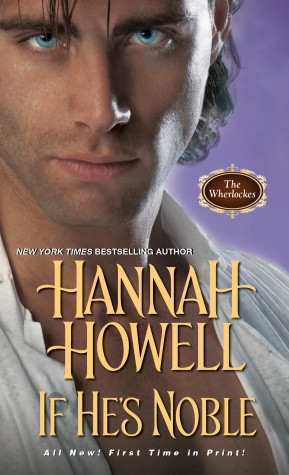 For Lady Primrose Wootten nothing has been ordinary since her father the Baron died and his wayward family filled the estate with greed and treachery. Primrose knows if she can just track down her brother, he can send the odious relations on their way. But instead she finds this enormous, powerful stranger, and forgets entirely what she was doing in the first place...

Sir Bened Vaughn isn't much afraid of a pistol. But he is a bit afraid of the woman holding it, who stirs up something so primal he's not sure he can shake it off. Vaughn is an honorable man, and he knows he has no right to desire Primrose. Yet he does have an obligation to help her, and as they learn more about her brother's disappearance, he realizes that means staying by her side...wanting her all the while... and wondering how much longer they can resist temptation...

I had fun returning to the world of Wherlocke’s and visiting the lovely family of Wherlocke’s and the Vaughn’s. Really love the family dynamic and the little known fact that everyone knows about them, that if someone comes after one of them, they are coming after all of them.

Sir Bened Vaughn had been a secondary character in the earlier books in the series and his gift is tracking down people and helping them clam when they are afraid or angry. The book title really suits Bened because the man is noble, Lady Primrose Wootten is a horticulturist. Primrose is searching for her brother Simeon, after the death of her father and the reveal of the true colours of her aunt, who wants to gain control of the lands that now rightfully belong to her brother. She can no longer wait for her brother to come home, so she goes looking for him herself. And on the way meets Bened, who decides to become her protector.

I really liked Bened and his Rose together. They were adorable together, with their first interaction and every single one after that. They understood each other, cared for each other from the moment they met.

Their story is sweet and lovely with a dose of passion but it also comes with some twists and turns, a truly cruel and evil aunt who will stop at nothing to gain the lands and title. They were also some funny moments along with meeting a newly found Wherlocke and a start of another possible romance between Primrose’s brother Simeon and another Wherlocke, Lilybeth. The book was a joy to read.

This was a great addition to the series and I’m eagerly waiting for more book especially Modred’s but I think that won’t be for while since he keeps getting described as a young man (still). Happy Reading!

Hannah D. Howell is a highly regarded and prolific romance writer. Since Amber Flame, her first historical romance, was released in February 1988, she has published 25 novels and short stories, with more on the way. Her writing has been repeatedly recognized for its excellence and has “made Waldenbooks Romance Bestseller list a time or two” as well as was nominated twice by Romantic Times for Best Medieval Romance (Promised Passion and Elfking’s Lady). She has also won Romantic Times’ Best British Isles Historical Romance for Beauty and the Beast; and, in 1991-92 she received Romantic Times’ Career Achievement Award for Historical Storyteller of the Year.

Hannah was born and raised in Massachusetts (the maternal side of her family has been there since the 1630’s). She has been married to her husband Stephen for 28 years, who she met in England while visiting relatives, and decided to import him. They have two sons Samuel, 27, and Keir, 24. She is addicted to crocheting, reads and plays piano, attempts to garden, and collects things like dolls, faerie and cat figurines, and music boxes. She also seems to collect cats, as she now has four of them, Clousseau, Banshee, Spooky, and Oliver Cromwell.