Cat Benoit has finally escaped the past—and the man who was the source of her nightmares. She’s off the grid, underground but watchful, and creating a new life for herself in Texas, far from the torrid dangers of her native New Orleans. She’s safe. He’ll never find her this time. Cat has to believe that. It’s the only thing keeping her sane.

Yet she can’t escape the attention of Ridley Cromer, the instructor at the martial arts dojo where Cat takes lessons. She arouses the animal in Ridley—and something feral comes to life when their body heat rises. Cat is in no position to let her guard down with anyone, especially someone who could be endangered by her past. But Ridley has secrets of his own—secrets only Cat would understand. If she dares to trust him.From the Paperback edition.

Please note: This is not a spoiler free review, infact I think it’s literally filled with all sorts of spoilers.

I’m unsure as to how to rate this book, but I’m going to go with 2-2.5 stars. I do love Christine Feehan’s books and I have reread quite a few and will continue to do so in the future. This one however was sadly disappointing.

On one hand, I enjoyed the plot (of what there was), maybe because it was different then the others in the series and at the same time had a similar setting to Jake’s book Burning Wild, which is my favourite in the series. I was liking the book till we find out who Eli is and he takes Cat to his ranch to safe guard her. Before we find out that hero (Eli Perez / Ridley Cromer) is basically lying to her, we see Cat Benoit as strong woman who not only escaped a deranged-shifter-man but also hid from him for years and is learning self defence.

Now to what I didn’t like; I just feel like in the last few books whether it was Christine Feehan’s lastest Ghost hunters (which I still have yet to complete b/c I couldnt take all the jealousy and the creepy attraction thing) or this book, the woman isn’t given a choice like at all. I get the mate stuff, I love that stuff when it’s done right but this is a bit more than that. The woman here has literally no choice of who she mates with, in the book it could be either that psychopath she spend almost half her life with or it could be the DEA agent that lied to her because of who bit her. View Spoiler »They both bite her. « Hide Spoiler .One of the things which bugged me a lot was the fact that the uncontroable attraction they (the women) seem have to the bad guy in the book because of the fact he bit her (this was also part of the fourth book of the series, Wild Rain and I only noticed it when I reread the book this year), here do we not only have that but we also have the fact that Cat spend her childhood with Rafe Cordero and for the lack of better word, was sympathetic towards him and blames herself for not being able to take care of him. Cat was a child, a illiterate orphan child who had no one to care for her and in other words I think it was stockholm syndrome more than anything so she’s really conflicted about dealing with Rafe. Then lets talk about the hero, as Ridley Cromer; I really liked him, as Eli not so much.Eli lied to her about everything to gain her trust as a part of his job and later expects a second chance. The second chance showed aggressive behaviour along with wanting too much sex (which I skipped), oh almost forgot he also bought everything Cat wanted apart from her freedom ofcourse.

Cat seemed to really want her freedom especially after she finds out that Eli lied to her and took her to his ranch, this continued for a quite a while but then suddenly it was all happy families *_*. She lost all her backbone and her character and she just sort of become a stepford wife with shifting abilities who was also getting taught self defence by Eli. There was also a lot cooking and coffee making involved which didn’t really have a point apart from the fact that she’s a great cook and Eli loves her cooking and she loves cooking for him…

I had high hopes for this one and now I have nothing more to add, expect I hope that the next book in the series Wild Cat will be better than this one. 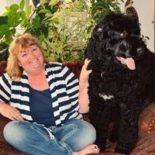 Christine Feehan is a #1 New York Times bestselling author multiple times over with her portfolio including over 50 published novels, including five series; Dark Series, Ghostwalker Series, Leopard Series, Drake Sisters Series, & the Sisters of the Heart Series. All five series hit the #1 spot on the New York Times bestselling list as well. Her debut novel Dark Prince received 3 of the 9 Paranormal Excellence Awards in Romantic Literature (PEARL) in 1999. Since then she has been published by various publishing houses including Leisure Books, Pocket Books, and currently is writing for Berkley/Jove. She also has earned 7 more PEARL awards since Dark Prince.