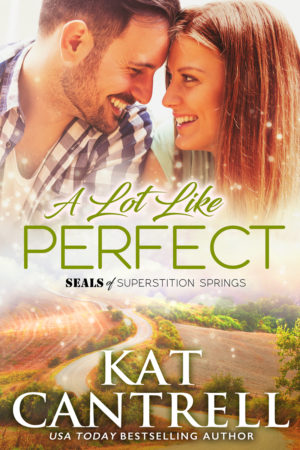 A Lot Like Perfect by Kat Cantrell
Series: SEALs of Superstition Springs #2
Published by Amazon Digital Services on 16 July 2018
Genres: Contemporary, Military
Buy on Amazon US, Buy on Amazon UK, Buy on Kobo, Buy on itunes, Buy on B&N

From USA Today Bestseller Kat Cantrell comes a sweet small town romance series with a touch of magic.
What kind of man falls for the woman meant for his buddy?
Navy SEAL Isaiah West has trouble calling himself “former” military, but after an involuntary discharge, redefining himself is the only option. The small town of Superstition Springs seems as good a place as any to regroup while he figures out where he’s supposed to go next—and deal with how that last operation in Syria messed up his place on the team. Aria Nixon has long accepted her role as the “plain” sister and really, she has no use for a man who only sees her looks anyway. So when her Aunt Serenity’s love prediction mentions the word “makeover,” it’s game on to prove she can get noticed without one. Who better to help her get the inside track on how a man thinks than…a man? Isaiah specifically, who has his own prediction to sidestep.
But in a mystical place like Superstition Springs, nothing ever goes as expected. It turns out Isaiah and Aria have a lot in common, and what’s with the attraction between them? Not supposed to happen. She can’t fall for Isaiah. He’s too perfect, too much what she wasn’t looking for and too likely to break her heart when he leaves. And Isaiah isn’t about to admit he’s got feelings for the woman he’s supposed to be helping attract an entirely different guy—his teammate. They should stay friends. Right?
Welcome to Superstition Springs, town in progress…SEALs of Superstition Springs is a clean and wholesome series starring heroes you can share!

From USA Today Bestseller Kat Cantrell comes a sweet small-town romance series with a touch of magic. A LOT LIKE PERFECT is now Live! Read Book 1 in the SEALS of Superstition Springs NOW

USA Today Bestselling Author Kat Cantrell read her first Harlequin novel in third grade and has been scribbling in notebooks since she learned to spell. What else would she write but romance? When she’s not writing about characters on the journey to happily ever after, she can be found at a taekwondo tournament, watching Big Bang Theory or dancing with her kids to Duran Duran and Red Hot Chili Peppers.

Kat, her husband and their two boys live in North Texas. She was a former Harlequin So You Think You Can Write winner and a former RWA® Golden Heart® finalist for best unpublished series contemporary manuscript.

Interview with Kat Cantrell and giveaway

Interview with Kat Cantrell and giveaway