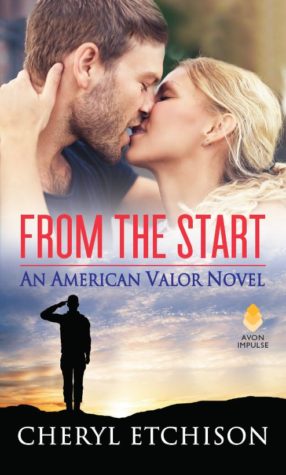 For many women, Ranger Battalion Surgeon Michael MacGregor is the ideal man. He's handsome, a generous tipper, not to mention an officer and a doctor. So when he encounters a woman resistant to his charms, he finds himself . . . intrigued.

Kacie Morgan has had her fill of arrogant military men since the last one left her with a shattered heart and one heck of a career rut. Now, with her prestigious fellowship starting in the fall, all she has to do is survive the summer-and her little sister's wedding. When an ill-fitting bridesmaid dress has Kacie wanting to temporarily shake things up in her carefully planned life, she knows just the man to call.

They agree to a no-strings summer fling. But it isn't long before Michael wants Kacie to be his forever. There's only one problem: in order to win her heart and have a chance at a future together, Michael will have to finally confront the nightmares from his past.

I’m very excited to read this one so check around by the end of this week for this one’s review!! Below is an excerpt of this one for your enjoyment! 🙂

May 2013
Kacie Morgan raised the cloudy glass tumbler to her lips and licked the course salt from its rim, all the while surveying the bar, knowing she was officially in hell. Despite it being a fairly new establishment—and a nice place as far as bars went—it just wasn’t her scene. The cowboy hats and cowboy boots. The painted-on jeans that both the men and women wore. The line dancing and mechanical bull.

Then there was the fact she couldn’t stand country music. She might have been born and raised in the South, but the appreciation for songs about racing pickups down red dirt roads, getting drunk on Jack, and skinny-dipping in farm ponds must have skipped a generation.She sighed and turned back around, catching a glimpse of herself in the mirror behind the bar.Dear God in the heavens. She shouldn’t have looked.

She squeezed her eyes shut and tossed back the remnants of her margarita on the rocks. A tang and tart shiver raced the length of her spine, her body squirming involuntarily to shake it off.

Her empty glass met the cow-print bar top a little heavier than intended, the upside being it garnered the bartender’s attention. “Another?” He shouted to be heard over the music.

He came over to clear away the empty glass and his eyes roamed her chest as he took his damn sweet time to read the front of her shirt. She didn’t have to glance at the mirror again to know the club lights ignited the rhinestones across her shirt, the word bridesmaid glimmering in the relative dark like a ’70s disco ball.

“Eight weeks,” she chanted to herself. “Eight. More. Weeks.”

Just eight weeks until the bachelorette weekend, the holiday weekend, the rehearsal dinner, the wedding, all of it would be over. Her baby sister would be happily married and, more importantly, her maid of honor duties would be complete. No longer would she have to be overly friendly to women who were not her friends. No longer would she be guilted into wearing questionable attire or spending money she didn’t have on all of the cutesy little things they wanted her to “chip in” on.

Kacie handed the bartender a few bills as he returned with her drink, then resumed leaning against the bar, watching as the country music gave way to hip-hop and the puritans bolted for the bars and seated areas. In the span of a few minutes, the dance floor became an instant bump and grind session for anyone under the age of twenty-five or with more than a few drinks in them.

In a sea of cowboy hats and baseball caps, her baby sister was easy to spot. The rhinestone tiara with attached veil on her head glittered in the pulsing lights as she bopped around the dance floor. And all the other bridesmaids were right there with her.

If she were a better maid of honor, a better big sister, she’d suck it up and join them. But she just couldn’t find it in herself to move. Ever since her well-planned future with a man she loved—or at the very least thought she loved—had taken a deep dive into the toilet nine months earlier, she found having fun an almost impossible feat. How sad. How pathetic.

With a pang, Kacie realized at the age of thirty-one she’d become what she always feared most—a total buzzkill.