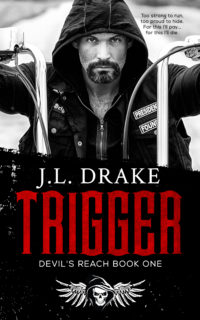 ***This book ends with a small cliffhanger. Intended for 18+. May contain Triggers.***

I was raised by the Devil himself.

Formed into a man who was unreachable.

I went from the boy with bruises to the man with a trigger.

Killing is the only thing that calms the itch.

The demons inside were a constant battle…

…until she changed everything.

Problem is when you spend most of your time in the dark, is it smart to step into the light?

I only ever want to tell the truth about the books I read.

Having read many MC romance books, I was let down by this book. I feel like it was ok… Trigger is about a woman, Tess and thepresident of the Devil’s Reach MC, Trigger. Both of them have horrid stories. We get a good insight into Trigger’s one but even at the end of the book I don’t really understand what happened to Tess when she was younger. It does sound really bad past though from the snippets we get.

I felt like this book was just a series of events. Nothing really fantastic in the story line though I wish there was. There was just a lot of interactions between characters and a lot of back and forth banter between Trigger and Tess. Don’t get me wrong. That is good, I just wished it had a bit more.. .I guess I wish it was more complicated in its story line with more developed characters. I felt like it was missing a lot but there was potential.

“I love when you lose it,” She whispered through a laugh.

“You have a death wish.”

Trigger was in interesting character. His past really shed lots of light to the type of man he grew up to be. He seems very strong and extremely capable. His dark side is very dark and his soul has had a lot of torture. But it is one of the things that interests you about Trigger.

Tess is a sweetheart. It sounds like she is just trying to get by. She is running from her past only for her it to come back at the end of the book which I was disappointed with. The ending in itself was just a bit too cliffhangery for me. It had me thinking “nooooooo. How dare you ?!”. Though I felt when they got together, they were pretty hot and sweet at times.

It was an ok book. I hope others enjoy it more and give it a try if you enjoy MC romance. But for me. It is getting a 3.5 star rating.

Bestselling author J. L. Drake was born and raised in Nova Scotia, Canada, later moving to Southern California where she lives with her husband and two children.

When she’s not writing, she loves to spend time with her family, travelling or just enjoying a night at home. One thing you might notice in her books is her love for the four seasons. Growing up on the east coast of Canada the change in the seasons is in her blood and is often mentioned in her writing.

An avid reader of James Patterson, J.L. Drake has often found herself inspired by his many stories of mystery and intrigue.

She hopes you will enjoy her stories as much as she has enjoyed writing them.