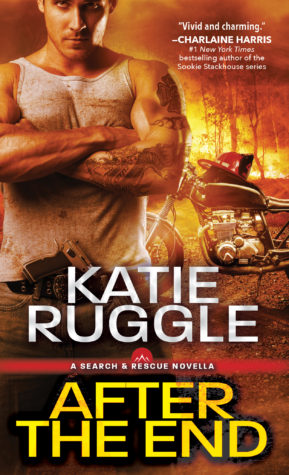 For fans of sexy, brooding ice diversMotorcycle Club bad boys turned firefightersTall, dark, and silent wilderness guidesAnd cops with hearts of gold...The end is just the beginning.
What happens after happily ever after? Now that the murderer has been caught and the arsonist is behind bars, the town of Simpson, Colorado has returned to its sleepy, picturesque former glory. Yet for the heroes of Search & Rescue, work is never done...
...especially not if the extraordinary women if their lives have anything to say about it.
Told in alternating chapters focusing on four unforgettable romances, this slice-of-life novella catches up with fan favorites from Katie Ruggle's Search & Rescue series—proving once and for all that the end is just the beginning.
After the End is the fun and heart-warming epilogue novella to the exciting Search & Rescue series by Katie Ruggle.

Have you missed Katie Ruggle’s Rocky Mountain Search & Rescue crew?
As a treat to the fans Katie just released a FREE epilogue novella, After the End, that features all of your favorites! You can download it for free at most online retailers!

You can also enter in to win an autographed set of the Search & Rescue series plus an advance reader copy of Run to Ground, the first book in Katie’s new Rocky Mountain K9 Unit series! (End of the Post)

Enjoy a teaser of the upcoming release Run to Ground (Releases June 2017) below!!

A fan of the old adage “write what you know”, Katie Ruggle lived in an off-grid, solar- and wind-powered house in the Rocky Mountains until her family lured her back to Minnesota. When she’s not writing, Katie rides horses, shoots guns (not while riding, although that would be awesome), cross-country skis (badly) and travels to warm places where she can scuba dive. A graduate of the Police Academy, Katie received her ice-rescue certification and can attest that the reservoirs in the Colorado mountains really are that cold. A fan of anything that makes her feel like a bad-ass, she has trained in Krav Maga, boxing and gymnastics.

Excerpt and Giveaway: Run to Ground by Katie Ruggle