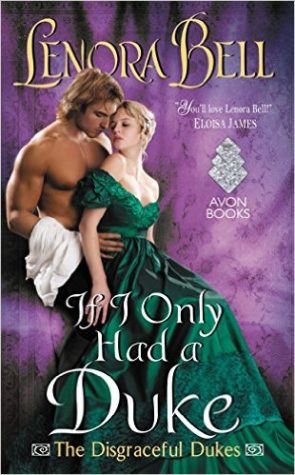 If I Only Had a Duke by Lenora Bell
Series: The Disgraceful Dukes #2
Published by Avon on August 30th 2016
Genres: Historical, Regency, Romance, Romantic Comedy
Pages: 384
Format: eARC
Source: the publisher
Buy on Amazon US, Buy on Amazon UK, Buy on Kobo, Buy on itunes, Buy on B&N

After four failed seasons and a disastrous jilting, Lady Dorothea Beaumont has had more than enough of her family’s scheming. She won’t domesticate a duke, entangle an earl, or vie for a viscount. She will quietly exit to her aunt’s Irish estate for a life of blissful freedom. Until an arrogant, sinfully handsome duke singles her out for a waltz, making Thea the most popular belle of the season.
The duke ruined her plans and he’ll just have to fix them.
Dalton, Duke of Osborne, is far too heartless for debutantes or marriage—he uses dalliances and public spectacle to distract from his real purpose: finding the man who destroyed his family. When his search leads to Ireland, the last thing he needs is the determined, achingly innocent Thea, who arrives in the dead of night demanding he escort her to her aunt. His foolish agreement may prove his undoing. The road to the Emerald Isle is fraught with unforeseen dangers, but the greatest peril of all might just be discovering that he has a heart...and he’s losing it to Thea.

This was my first read by the new historical romance author Lenora Bell but it’s definitely won’t be the last. I had a blast reading this one. I am really looking forward to the next book in this series and as I write this I’m already starting the first book in the series.

Lady Dorothea Beaumont likes living in Ireland with her aunt far away from London and the eyes of the society, this is would be her last season which means no more balls and parties, no more marriage talk. All Thea wants to do is get it over with so she could return to Ireland, too bad the Duke of Osborne is determined to ruin it. Thinking that Thea wants to entrap him using the paintings in his ancestral home as an excuse, he decides to make her popular which he thinks would get her off his back. He doesn’t realise the last thing Thea wants is marriage, leading Thea to try her hand to convince Dalton to take her to home to avoid being forced in marriage by her family. And of course to allow her to catalog his paintings.

I loved Thea, she was a great protagonist. She’s funny, lovely, independent and would rather not be married, not after seeing the effects of her parents marriage. She wants love but think’s she very unlikely to find it. I loved her passion for Art, her will to do what she wanted to find happiness and the ill mannered Duke trying to derail her plans wouldn’t stand in her way.

Our Hero, the ever kind and understanding *NOT* Dalton, Duke of Osborne has no time for marriage or balls he’d rather be hunting for his brother’s killer. He plays his part of a rake to the society but really is filled with guilt over the death of his younger brother. Avenging his brother would bring him some peace and maybe finally allow his mother to come out of her shell, allowing them to become a family again.

“…someone stole my breath away”. And your heart? she wanted to ask. Was it stolen as well? because mine’s lost forever.

Thea and Dalton are both quite set in their ways. Their banter was hilarious and their inconvenient attraction to each other made for great entertainment. Thea teaches Dalton that there is more to life then just seeking retribution, making him feel alive and introducing laughter/chaos into his life. As Dalton makes her realise that she can fall in love. They helped each other become better individuals. Their romance was sweet, funny and highly enjoyable. I loved the letters that they wrote to each other at the start, it made for a very intriguing start to the book.

“We happen to be made for each other”. ~Duke of Osborne

Not only was the protagonists interesting so were the secondary characters such as Con, Dalton’s more friend than valet. As was Molly, Thea’s friend.

I didn’t like the fact that even though she’s the one who didn’t want to be married to Harland and tells him the truth, even though her mother was responsible for the whole fiasco she has to deal with the aftereffects and gets blamed (though understandable for during that time period). I did wish that the ending had been slightly better constructed especially with how Dalton’s family came about but apart from these I really enjoyed it.

Their journey back to Ireland is filled with twists and turns. I was entertained throughout the book and Ms. Bell wrote a enchanting tale filled with love, betrayal, forgiveness and a happily ever after. It’s a great treat for any historical romance fans!

Lenora Bell is a third generation Alaskan and her hometown still has no traffic lights or fast food, but the public library is going strong!

An English teacher with an MFA in Creative Writing, Lenora has traveled the globe using music to bring smiles to classrooms. She currently lives in Switzerland with her carpenter husband and two naughty tiger-striped kitties named Dorian Gray and Percy Shelley.

In 2014 she won the Romance Writers of America’s Golden Heart Award for Best Historical. She’s thrilled to be debuting with Avon Books in 2016!