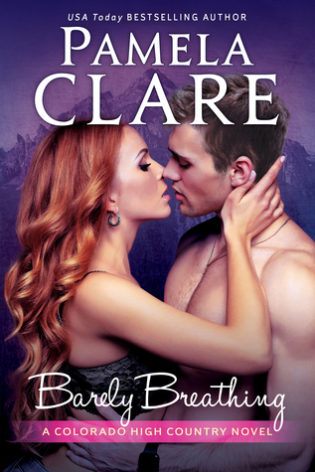 A hot contemporary romance from the author of the acclaimed I-Team series…
Lexi Jewell left Scarlet Springs twelve years ago, vowing never to return to the small Colorado mountain town where she grew up. Now, here she is—over thirty, out of a job and with little choice but to move back in with her eccentric father. Lexi knows it’s just a matter of time before she runs into Austin Taylor, her first boyfriend and her first heartbreak. She’s determined to show him she’s over him—until he steps out of a pickup truck and back into her life, looking sexy as hell in his mountain ranger uniform.
As far as Austin is concerned, Lexi can turn her snazzy little convertible around and drive back to Chicago. After all, she ripped his teenage heart to pieces and turned her back on the town he loves. But from the moment he sees her again, he can’t get her out of his mind. Even her smile messes with his head.
When an evening of conversation turns into something else, Lexi and Austin agree to be friends—with benefits. But as Lexi starts making plans to return to the big city, Austin realizes he’ll lose her a second time unless he can show her that what she’s searching for has been right here all along.

I am a huge fan of Pamela Clare’s writing and her I-team series. When I heard she was starting a new series I was over the moon. This is slightly different to her I-team series which was a lot more action and suspense based but the writing, the romance and the plot still flowed beautifully.

Austin Taylor a former football player and is now a mountain ranger with some abandonment issues.

Lexi Jewell had a difficult childhood, her mother died when she was very young leading Lexi and her sister growing up esentially without their parents love because their father after the accident didn’t seem to care about his children and married another woman who also didn’t know how to take care of two young girls. So Lexi grew up working every hard in her fathers B&B with one goal in mind to leave behind Scarlet springs.

Lexi and Austin were high school sweet hearts who because of a misspoken sentence broke apart with both of them blaming the other for their broken heart. So when Lexi comes back to town Austin is just impatiently waiting for to leave again because he doesn’t want with the feelings and memories she brings back.

Lexi and Austin had a very adorable, cute and fun relationship. It was sweet and lovely to read especially they both knew they shouldn’t get involved with each other again but neither could resist. With some mountain climbing, rescuing and some suspense the book makes for a good lighthearted read about a second chance at love and HEA.

Quibbles: I really did not like Lexi’s father and her step-mother. They were both so aggravating; their characters and their behaviour. I also felt like we knew a lot more about Lexi then we did about Austin and maybe less scenes with Lexi’s family members and other secondary characters could have benefited the book more.

While this is a contemporary I liked that Ms. Clare did not completely forgo the suspense. It’s not to the extend that I-team had but its there and it blended extremely well with the story.

Overall, it was a good start to a series, the writing was always engaging and the secondary characters were very interesting. I’m looking forward to the next one.

USA Today best-selling author Pamela Clare began her writing career as a columnist and investigative reporter and eventually became the first woman editor-in-chief of two different newspapers. Along the way, she and her team won numerous state and national honors, including the First Amendment Award and the National Journalism Award for Public Service. In 2011, she was honored by the Colorado Pro Chapter of the Society of Professional Journalists with their Keeper of the Flame Lifetime Achievement Award for her work. A single mother with two grown sons and two cats, she writes historical romance and contemporary romantic suspense within view of Colorado’s beautiful Rocky Mountains. She is a two-time RITA finalist (Surrender, Defiant) and a three-time Daphne du Maurier finalist (I-Team series). She loves history, having studied archaeology in college, and has traveled extensively, living for almost three years in Denmark, which feels like home to her. She attributes her love of historical romance with the years she spent visiting ruins and castles in Europe.