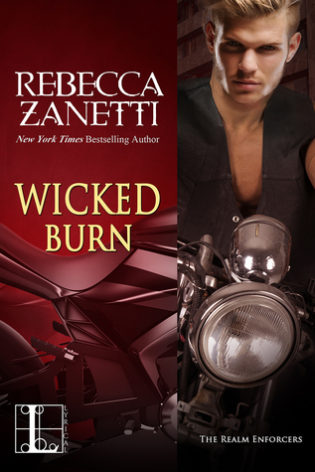 Simone Brightston knows she can beat the rap her enemies are pinning on her. An Irish witch is nobody's fool, and she didn't get to her position on the high council without serious power. But her cousins want her to hide out-and they somehow convinced her arch nemesis to play getaway driver.
Of all the men she's known, Nikolaj Veis is the hardest to intimidate. With his demon-dark eyes and his inscrutable beauty, he's as desirable as he is dangerous. And he knows better than to underestimate Simone. So when he pulls up on a roaring bike and tells her to climb on or fight it out, she grabs a handful of jacket and holds on tight. Running from the law may not be the smartest plan. But when it comes to Nick, hot pursuit and a blazing fast ride are exactly what Simone's looking for . . .

When I first found out that we would be getting a spin-off for the Dark Protectors series I really hoped that we would start of by getting Simone and Nick’s especially because in Marked it was quite obvious they still had feelings for each other especially from Nick’s end but while that didn’t happen and I was ecstatic to find out that they the third book would be theirs and it was worth the wait.

Simone Brightston is a Coven Nine witch who is getting framed for mining PK, the one thing that could actually harm a witch and for treason. She’s also the cousin of Moira (the heroine of Hunted) and to the Dunne’s. She while seems like a very tough witch and considerable power she is a softie when it comes to her family and Nick.

Nick (Nikolaj Veis) is a demon who gave up the life he could have had to save the lives so many people as well the birth of some. He is now the oldest living demon in the realm and the advisor to the Demon fractions leader Zane.

Nick and Simone have been secondary characters in the Dark Protectors series and their banter along with Nick’s nickname/ endearment for Simone had intrigued me from the first moment we see them together. Now that the war is over and Simone is still single Nick has finally decided to make his move and claim back the woman he loves.

They have chemistry in spades along with a history that ended up breaking young Simone’s heart and turned Nick into more hardened warrior who did everything to preserve the future and stop the war. Nick and Simone especially Simone who despite her tough exterior and her giving Nick a hard time never stopped loving him. This is second chance romance where truths are finally revealed with Simone and Nick coming out stronger together at end. It’s hard to not to root for a couple who would do anything for each other. The book also had some twists like Simone’s shocking parentage and why Nick had broken Simone’s heart with timely action and battles to keep the reader interested.

Quibbles: While I really loved the action I really wished we had more of a bit of a downtime with Nick and Simone especially since a part from a few references and short scenes to their past we don’t see how they had been together when they were younger. Along with the fact that it was never mentioned what had exactly happened during the time in Marked when Simone was kidnapped by the Demon leader I felt that was almost forgotten about or maybe I guess the author felt it didn’t need to be rehashed.

Overall, it was yet another great addition to this series and I’m really looking forward to the next one because of the unanswered questions left over from this and the new thread that could lead so many possibilities in the realm enforces world.