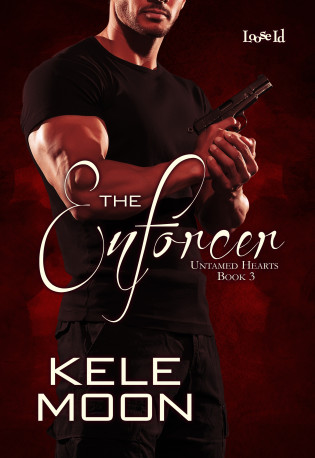 They are the lost boys.
Sons of mafia mistresses expected to keep their fathers’ sins in the shadows. The lucky ones are forgotten.
Unfortunately for Valentino “Tino” Moretti, his brother Nova was too smart to be forgotten, and too valuable to risk when he resists a life of crime. So they punished Tino instead. Forced into the cruel world of the Sicilian Mafia at twelve, Tino was broken before he was old enough to know the man he was supposed to be. Now he’s what the mafia made him.
The enforcer.
A trained killer forbidden to love, but he did anyway. He's loved Brianna all along.
Raw and beautiful, their romance was all consuming and far too dangerous. They were ripped apart a long time ago. It’s not until the borgata puts out a hit on her that Brianna falls back into Tino’s arms, churning up their dark past and unraveling all the Moretti brothers’ closely guarded secrets.
This isn’t the end of the story. It’s only the beginning, and it is brutal.
There’s a reason enforcers are considered too deadly to love.
“We have to be better than them. Stronger. Faster. Smarter. Lost boys have to fly.” ~Carlo Moretti, original lost boy.

“Who are we hiding from?” Brianna asked as she tossed her bag on the chair by the bed.
“Everyone,” Tino said as he locked the door behind them.
He had a briefcase with him, but there were no clothes in it. Just cash and firearms, neither of which she’d been surprised by when he pulled it out of the trunk.
“Like the feds?” she asked as she stared down at the tank top she was wearing under the jacket Carina had loaned her. She glanced back to Tino as he took off the camouflage hat and set it on the desk by the door. He pulled off his jacket, tossed it over the chair, and stood there in that blue University of Kentucky shirt that was too tight across his broad, muscular chest and clung to his thick biceps. He was way too sexy for her sanity, so she quickly turned away and asked, “Is that why you’re using an ID with your father’s name on it?”
“I’m using that ID ’cause the credit cards in my father’s name are the only ones I have that Nova doesn’t know about, and nice hotels need a credit card for incidentals. The feds are the least of our problems. Where we stand right now, the feds would be doing us a favor to pick us up.”
“We didn’t have to stay somewhere this nice,” she argued. “We should’ve just gone somewhere that takes cash.”
“I’m not staying in a shithole. It bothers me, and you know why it bothers me,” he said with a glare. “If you knew where I landed when I first got to Miami last week, you wouldn’t give me merda about the hotel.”
“For a wedding?” She arched an eyebrow skeptically, ’cause Miami was clearly an issue. “Did something happen in Miami? Obviously you’re not as out as we all thought. Did you piss Don Moretti off?”
“The don pissed me off,” Tino growled at her. “And he knows it. That’s why he attacked you. His plan didn’t work, and now he’s trying to make me feel vulnerable. He’s trying to make me feel sixteen again. He’s scared.”
“He’s not the only one,” Brianna whispered as she sat down on the bed. She looked at her hands as everything hit her again. Her career was as good as gone when she had been working toward becoming a headliner since she was old enough to stand on her toes. For all the years since she and Tino had been apart, her job had been her sole source of joy, and knowing she was going to lose it after she disappeared without a word had her fighting tears. “I did the right thing. I was lonely and unhappy, but I was supposed to be secure, and you were supposed to be safe. Nova promised me.” She lifted her head and stared at him, seeing that Tino was standing there, his entire body tense, as if she had physically struck him. She wanted to feel bad, but damn it, he’d been washing hot and cold since Kentucky. “I’ve missed you. I’ve cried for you. I have closed my eyes a thousand times and tried to imagine it was you touching me instead of—”
“Don’t,” Tino cut her off, as he looked away, clenching his jaw. “Don’t talk about him touching you.”
“It makes you uncomfortable?” She almost shouted it. She was just that indignant. “It was my reality, Tino. While you were off enjoying Southern hospitality with your little strawberry-shortcake friend Alaine, I was living a lie for security, and now that’s gone too! I guess I deserve it. Maybe we both deserve it. I lied in front of God. You made me a liar.”
“I didn’t fuck Alaine. She’s married to Chuito Garcia, who, aside from being the reigning heavyweight UFC world champion, is also my best friend,” Tino said as if he didn’t hear the rest. “I haven’t touched her.”
She let out a bitter, mirthless laugh. “Oh yes, I’m sure you’ve been a pillar of chastity while we’ve been apart.”
“No.” He shook his head in denial. “I fucked my brains out since we broke up. I snorted enough blow to kill an elephant, and I drank so much Nova’s convinced I’m one more drink away from liver failure.”
“Jesus, Mary, and Joseph, Tino—” Brianna started, feeling her blood pressure spike.
“I have been dying without you,” Tino said before she could finish. “I’ve been slowly dying, and no one knew it. I couldn’t tell anyone. Then I had to give up the fucking coke ’cause I thought Nova was gonna off himself over the guilt. I’ve just had to sit in Kentucky and die. Sober.” He pulled off his shirt and tossed it over his jacket. “So don’t worry, baby. I’ve suffered for your security too, but if it makes you feel better, I’m gonna make sure they pay for fucking it up.” He walked past her to the bathroom, pulling at the button to his jeans as he did. “I’m gonna make them all pay. I’m done being Cosa Nostra’s whore.”
She flinched when he said it, because that word had so many terrible implications for Tino, but he just gave her a look that dared her to deny it as he went on, “They broke me a long time ago; now they’ve broken you too. That wasn’t supposed to happen. I’ve been screwed for the last time, and you can put it on my fucking tombstone. I’m done!”

A freckle-faced redhead born and raised in Hawaii, Kele Moon has always been a bit of a sore thumb and has come to enjoy the novelty of it. She thrives on pushing the envelope and finding ways to make the impossible work in her story telling. With a mad passion for romance, she adores the art of falling in love. The only rules she believes in is that, in love, there are no rules and true love knows no bounds.

So obsessed is she with the beauty of romance and the novelty of creating it, she’s lost in her own wonder world most of the time. Thankfully she married her own dark, handsome, brooding hero who has infinite patience for her airy ways and attempts to keep her grounded. When she leaves her keys in the refrigerator or her cell phone in the oven, he’s usually there to save her from herself. The two of them now reside in Florida with their three beautiful children, who make their lives both fun and challenging in equal parts—they wouldn’t have it any other way.