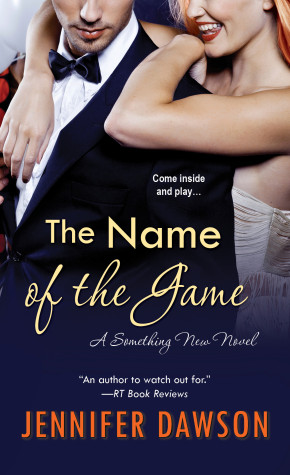 A professor of forensic anthropology, James Donovan is the reasonable sibling among the passionate, impulsive Donovans. But there's nothing reasonable about his reaction to baker Gracie Roberts. She's all wild curls and mouth-watering curves, as deliciously tempting as the sugary treats she's famous for--and twice as irritating. But before long, James decides that getting a taste of her is one indulgence he can't pass up. . .

Independent, smart, and sexy, Gracie's year-long dry spell has her itching for a man. Responsible, health-obsessed James? Not in a million years! She needs a guy who knows how to let loose! But when James sets out to show her just how satisfying a disciplined man can be when pleasure is at stake, she learns just how sweet--and spicy--he really is.

Have James and Gracie found the recipe for love?

I really enjoyed this book. I had been wanting to read this book ever since I read the second book in the series; The Winner Takes it all. The couple had such great banter and chemistry back then which was extrapolated in this book.

Professor James Donovan and Gracie Roberts both have very strong personalities. Individually they are both very interesting with how their childhood shaped them into the people they are today and both have some scars left over from said childhood. They are also very different from each other from their diet (Gracie bakes and James is a health nut) to their interactions with their family/friends and their past relationships with other people. Side note; I do think that James came across as more vulnerable in the relationship just because of his past.

James and Gracie’s story has the best kind of relationship that I like to read in books (in my opinion). They started off as enemies both thinking that other person dislikes them so they both go out of their way to annoy and taunt each other, in the process trying not to think of the attraction they both feel yet refuse to acknowledge. I loved how everyone part from them knew what was going on but they had no clue. As they start getting to know one another, they realise that even though they are both very different, it’s not really a bad thing and learn to embrace each others differences. They were adorable together. I also really liked the new secondary characters that were introduced in the book and I look forward to them getting their stories told in the future.

Quibbles: Without giving away anything, the ending I thought could have been a bit better and I really would have liked an epilogue.

Jennifer Dawson does a great job at creating tension and scorching chemistry between her couples and this one was no exception. I can’t wait to read more books by her. The book gets solid four stars for being very entertaining and a joy to read!

Jennifer Dawson grew up in the suburbs of Chicago and graduated from DePaul University with a degree in psychology. She met her husband at the public library while they were studying. To this day she still maintains she was NOT checking him out. Now, over twenty years later, they’re married and living in a suburb right outside of Chicago with two awesome kids and a crazy dog.

Despite going through a light FM, poem writing phase in high school, Jennifer never grew up wanting to be a writer (she had more practical aspirations of being an international super spy). Then one day, suffering from boredom and disgruntled with a book she’d been reading, she decided to put pen to paper. The rest, as they say, is history.

These days Jennifer can be found sitting behind her computer, writing her next novel, chasing after her kids, keeping an ever watchful eye on her ever growing to-do list, and NOT checking out her husband.

Book Tour and Giveaway: The Winner takes it all by Jennifer Dawson