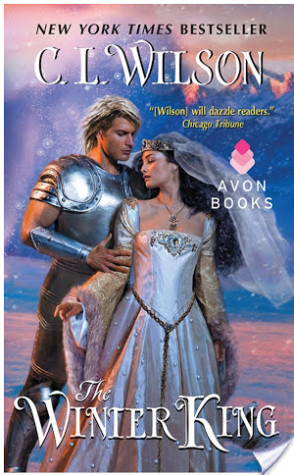 After three long years of war, starkly handsome Wynter Atrialan will have his vengeance on Summerlea's king by taking one of the man's beautiful, beloved daughters as his bride. But though peace is finally at hand, Wynter's battle with the Ice Heart, the dread power he embraced to avenge his brother's death, rages on.

Khamsin Coruscate, Princess of Summerlea and summoner of Storms, has spent her life exiled to the shadows of her father's palace. Reviled by her father, marriage to Wintercraig's icy king was supposed to be a terrible punishment, but instead offers Kham her first taste of freedom—and her first taste of overwhelming passion.

As fierce, indomitable Wynter weathers even Khamsin's wildest storms, surprising her with a tenderness she never expected, Kham wants more than Wynter's passion—she yearns for his love. But the power of the Ice Heart is growing, dangerous forces are gathering, and a devastating betrayal puts Khamsin and Wynter to the ultimate test.

I really enjoyed C. L. Wilson’s Fading lands/ Tairen Soul Series books so it was no brainer that when I saw this, I immediately wanted to read it. It’s a decision I certainly do not regret.

This is the story of Khamsin Coruscate, Princess of Summerlea and Wynter Atrialan, the King of Wintercraig.

Khamsin is the youngest daughter of King Verdan of Summerlea, forced to hide not only her status as a princess but unwanted from her father, she is left alone to her devices. She loved her brother very much so and enjoyed his tales of adventure since she couldn’t step out of the castle herself. His disappearance made her life even worse.

Khamsin like her elder sisters also has magic, her magic is related to storms and so her sisters affectionately call her Storm.

As a character Khamsin was wonderful, strong (not just because her powers but as a person), independent, slightly broken, very brave and to a very small extent foolish in believing the best in people (mostly her family). Her fathers behaviour never changed who she was.

Wynter, isn’t the man he used to be after his fiancée betrayal by leaving with the Prince of Summerlea, Falcon and getting his younger brother killed. He took on the Ice Heart, a cruse of sorts that led to many men’s death by just trying to acquire it. Wynter is becoming his name and that of the magic he took on, cold and icy in his hatred of Summerlea and vengeance for his younger brothers death. After three years of battling with the Summerlea and in deep cluthes of the Ice Heart; Wynter has won the war but lost all resemblance to the man he once was.

Wynter on the other hand is as cold as Khamsin is wild and passionate about things. I happen to like cold heroes (pun unintended), I have no clue why but I like the fact love of the right woman/child can bring out the best in them. He is also a great king to his people, understanding them and very shrewd/intelligent.

Khamsin is forced to marry Wynter because of his request (more like threat to the king) to marry one of the princess of Summerlea is exchange for keeping peace and ofcourse an heir for his throne. From the moment they meet, we see sparks.

Wynter couldn’t stop thinking about her from the moment he met her and Khamsin couldn’t either.The wedding happens fairly early on the book so most of their interactions are as husband and wife. You get to see all the development they go through, from being strangers lusting after each other, to trusting each other and eventually falling in love. Which was great to see since both of them are quite guarded at the start neither sure of what to trust and how to gain the upper hand. They had a great dynamic.

Ofcourse the book isn’t all focused on the romance, we see some great battles, more betrayals and heartache. Which is what I think made the story more interesting and exciting to read. During said battles,I wasn’t sure how anything was going to get solved but the author does it brilliantly.  This book saddles the line between fantasy and paranormal which is something I really enjoy. Time is also running out for Wynter to defeat the Ice Heart and become the being feared in all lands.

Quibbles: I really disliked Khamsins father and brother, they were both extremely selfish and the way they treated her made me want to go all GBH to them. Some of the other characters are also introduced who will soon be getting their own books which I’m greatly looking forward to. This is different to the authors other books but I enjoyed it nonetheless.

This review turned out a lot longer than I expected, oh well 😛

Overall, it has magic, fairytale lands, evil parents, epic battles and love. What’s not to like? Happy Reading!