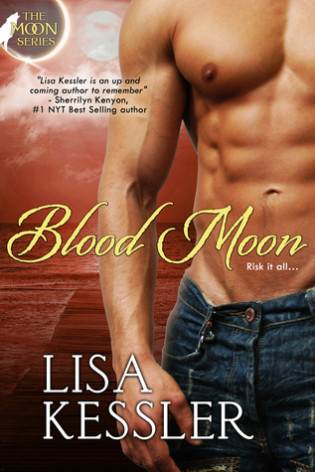 Nadya Dalca has been handed a death sentence. She's been bitten by the last living genetically enhanced werewolf―part of the Nero Organization's disastrous Moonlight project. With the poisonous blood now coursing through her system and pushing her to the limits, it is only a matter of time before Nadya's fate is sealed...

Gareth Takoda told himself he couldn't get involved. Caught up in a maelstrom of grief and bitterness, he has been isolating himself from his Pack. But when he is charged with watching over Nadya's first transformation―or bear witness should it go horribly wrong―Gareth is torn further by unwanted desire and the need to protect what is his.

One kiss changes everything. One shattering, all-consuming kiss. And with it, Nadya and Gareth face either salvation...or death.

This is my first time reading a book by Lisa Kessler and though this is the third book in the series Moon, I think it can be read as a standalone since the background information is provided.

Nadya Dalca was bitten by a enhanced (psycho) werewolf and now she has a death sentence. Nadya is the sister to one of the heroines from previous book in the series. Nadya is new to the whole werewolf’s are real world. She doesn’t know the first thing about being a werewolf let alone being an enhanced one.

Nadya is trying to be strong and not wallow in despair that she’s going to die. She doesn’t do the whole woe is me thing instead she masks her inner turmoil and grief by taking action, trying to live her life and finding a way to stop her upcoming death. Since She doesn’t want to put her family in danger by becoming a paranoid, aggressive killer. She was a strong lead with some slips but that was understandable. I really liked her.

Gareth Takoda is a werewolf, he has isolated himself from the pack ever since his twin brother’s death at the hands of a jaguar shifter.

Gareth is a loner, he doesn’t want to get close to anybody especially not a woman who’s going to die on him.Gareth wanted revenge/justice for his brother since he wasn’t able to get that, he decides to leave. Gareth is like other alpha heroes, all about ‘ you’re mine’. He is possessive of Nadya but willing to make compromises to make her happy.

Quibbles: Firstly Gareth’s behavior when he finds out that Nadya is his mate, what does he do? tell her that he will be with her ? and find a way to help her ? No. He leaves his dying mate, not even telling her that she is his mate and saying that she should be with Jason but I got over that since it was understandable since all his family ‘left’ him and he couldn’t deal with another person leaving him. What I didn’t understand was he leaves for a couple of days and then just comes back without any epiphany. Secondly, people in this book took many unnecessary risks, for example; I understand that nobody wants Nadya to die but at least make sure that the help doesn’t have ulterior motives especially considering that fact the help is from the enemy, then there was that whole leaving Nadya in a room alone while minutes before the enemy was around, it didn’t make any sense. I was getting really annoyed with Jason; his irrationality about ‘true mates’ and his subsequent behavior and again the risks he took made me not like him. There was also the whole Gareth mysterious powers of healing which though miraculous, just were really not unconvincing and I wanted to know about Gareth, we didn’t get to know much about him.

This story had a lot of potential but it never achieved that. The direction that the book took was quite predicable. The book did have its strong points such as the world building, the writing and Nadya.

Overall, this was just an ok read.