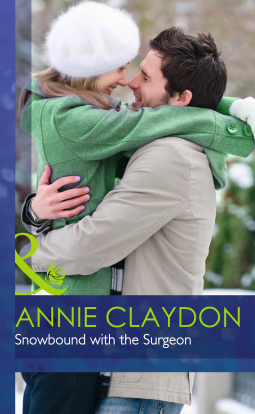 Let it snow…
Fiercely independent Dr Neve Harrison won’t let the heavy snow stop her from treating patients… she just needs a little help getting there! Her knight-in-shining-armour is handsome, enigmatic Joe Lamont – and whilst the temperature outside is freezing, inside Joe’s four-wheel drive it’s practically sizzling!

Joe’s past is a well-guarded secret, but as the snow continues to fall, and they’re trapped in their wintry Yorkshire village with nowhere to hide, can Neve’s healing touch warm this scarred ex-army surgeon’s heart?

Mills and Boon Medical books are more often than not are sweet and have a soft/heart tending romance. This one was like that. It was a light contemporary focused on the two protagonist who had both emotional scars and a damaged past to deal with to move forward with life.

What I liked: The characters; both Neve and Joe are easily likeable. Their connection is also very evident from the start. They were good together. The plot also helps with enforcing that connection between Neve and Joe so that they could get to know each other and gives them time to be together when they both otherwise would have stayed away from each other and giving love a chance.

Quibbles: I felt at times that the characters had a lot more potential which wasn’t achieved. There were also times when the author gave the character a behavior such as Neve’s almost constant anger which wasn’t ever fully explained. I would also liked a bit more of Joe’s POV since we didn’t get to know much about him. Lastly Joe’s behavior near the end felt very unlike his character.

Overall: It was an enjoyable that I felt could have been a lot better but nevertheless makes for a good holiday read!