Skip to content
This book may be unsuitable for people under 17 years of age due to its use of sexual content, drug and alcohol use, and/or violence. 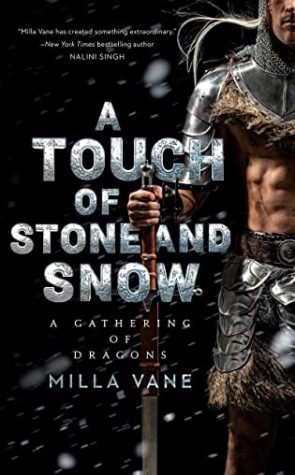 Milla Vane returns to her exhilarating A Gathering of Dragons series, into a world of fire, demons, and passion in the midst of a great evil that will bring only death and destruction.
Danger lurks in the western realms. Though an evil king has been defeated, a sorcerer warlord has risen and nobody is safe. This demon-possessed warlord creates magical terrors, attacking nations with the ultimate goal to weaken and demolish them before the Destroyer's imminent return.
When Lizzan leads the Kothan army against these terrors, only to see her soldiers massacred and to emerge as the only survivor, she is called a coward. A disgrace. A failure. Shunned from her home, Lizzan now wanders in solitude through the lands as a mercenary for hire, until she encounters a group of warriors seeking new alliances with the northern kingdoms--a group that includes Aerax, the bastard prince of Koth, and the man who sent her into exile. Though they were former childhood friends, Aerax cannot trust the woman whose failure led to the fall of a kingdom. But when a goddess's demand binds them together, Lizzan and Aerax must find a way to overcome their painful pasts. Or there will be no future for the western realms...

A Touch of Stone and Snow is the second book in the gathering of the dragon series by Milla Vane. Introducing us to a different couple from a different territory in the Western realms, the island of Koth.

Lizzan of Lightgale was the captain in the army for the island of Koth. The lone survivor of a horrendous attack on the army on one part of the island, she is then exiled and removed from the book of names. No one is allowed to acknowledge her existence and her family is now treated horribly, stripped from their previous position.

Aerax is the bastard prince of Koth. From his birth, he and his mother are shunned and his name isn’t even in the book of names. All this changes when a fever causes the king and his heirs to die. Aerax is then bought in and acknowledged by his uncle, the now king. All he’s ever cared about is Lizzan and Caeb, his snow cat companion.

Lizza and Aerax were childhood friends, she was the only one who said his name and treated him well. They become more as they turned older but after Aerax is ‘accepted’ as the prince and Lizzan’s dream of being a solider leads them to separate paths, though they still very much care and love each other. They find each other again later on, only for Lizzan to be exiled.

I really liked Lizzan and Aerax together. Lizzan has tired to hate the prince who broke her heart and did nothing. Aerax had loved Lizzan and hated Koth from every fibre of his being, more so after learning the truth of the island and the royal family.

Lizzan exile and the attack changed her, she has survivors gulit, is often than not drunk and as someone who was once loved by her family is shunned by everyone. She wants to clear her name so family wouldn’t be ashamed and asks for a quest from Vela which ends up protecting the prince. Lizzan, Aerax and Tyzen, Seri and the other warriors of the Ran Maddek’s dragon (A Heart of Blood and Ashes) end up on an adventure. To solidify alliance first and then to save Koth. The whole adventure part is done extremely well, also the whole scene in monastery is pretty enjoyable in more you know suspenseful way. It has elements of horror, the whole time you’re just what will happen next. I loved it! There is also decent amount of battles and action and more information about the western realms, the legends and the gods that various people worship. Which I found fascinating, also the whole element of how people in power twist the narrative and history to their advantage. The whole of Koth, believes something that is not true, their customs and how the people act like hypocrites.

I’m not gonna give away too much but I loved the romance and fantasy. This book is definitely more sweeter than the first book, I went in thinking they’d be too much angst and hatred etc. There is angst, but it’s not overdone, it has the push and pull to keep a reader interested. Lizzan and Aerax are just very captivating characters, they are pretty strong, have been through a lot of shit and while they carry the scars at the end of the day, they are willing to die for each other and also to save other people. I also loved the snow cat Caeb, his relationship with Lizzan and Aerax who as children themselves saved him.

I think part of why I loved this much more than the last one was because the whole I hate you part didn’t last very long and the love of Lizzan and Aerax is just prominent as well pretty strong. They are reasons of why they can’t be together but you’re never in doubt that they don’t love each other or that they treat each other cruelly.

Can’t wait for Saxen and Laina’s story which releases next year!

Overall, a fantastic addition to the series! I can’t wait to see what Milla Vane brings us next.

~I won a paperback of this book in a giveaway, this does not affect my opinion of the book in any way~