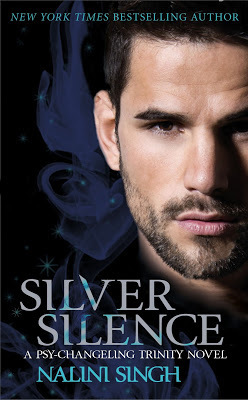 Control. Precision. Family. These are the principles that drive Silver Mercant. At a time when the fledgling Trinity Accord seeks to unite a divided world, with Silver playing a crucial role as director of a worldwide emergency response network, wildness and chaos are the last things she needs in her life. But that’s exactly what Valentin Nikolaev, alpha of the StoneWater Bears, brings with him.

Valentin has never met a more fascinating woman. Though Silver is ruled by Silence—her mind clear of all emotion—Valentin senses a whisper of fire around her. That’s what keeps him climbing apartment buildings to be near her. But when a shadow assassin almost succeeds in poisoning Silver, the stakes become deadly serious…and Silver finds herself in the heart of a powerful bear clan.

Her would-be assassin has no idea what their poison has unleashed...

Where shall I start??

As everyone and their mother probably knows by now, I love Nalini Singh’s books and her Psy/Changeling series happens to be my current favourite pnr/fantasy series so it was no surprise to anyone that I was eagerly awaiting the release of Silver Silence, book 1 in the second season of the Psy/Changeling series and let me tell it did not disappoint.

Short review: THIS BOOK IS AWESOME!! BEARS ARE A+++ AND I LOVE YOU SILVER. YOU SHOULD GO BUY THE BOOK OR ELSE SILVER WILL COME FOR YOU!!

Silver Mercant is the director of the EmNet (the world emergency response network) and the senior aide of Kaleb Krychek. As a powerful telepath, a Mercant and as the head of EmNet, Silver is already pretty up on the hierarchy which also makes her a target from group unhappy with the trinity.

Silver is such a fascinating women, she is completely rational about everything apart from her grandmother, her brother and one giant bear alpha. She’s a complete badass, extremely intelligent but she’s also warm even though she thinks she’s ice cold. She’s such a unique individual and I ended up really loving her.

Valentin Nikolaev aka “Mr. I. M. A. Medvezhonok.” is the alpha of the bear clan, StoneWater in Moscow (and what an alpha he is!!). Valentin recently become the alpha when the previous alpha stepped down, Valentin has hands full with the newer issues within the clan but he makes time to go tease his starlight. Valentin, like the other alpha changelings is a protector at heart.

I really loved Valentin, his humour, the way he cared for his clan along with his trying to be subtle yet ruining that by just barging in/growling because bears….He really was the full package!

I loved Valentin and Silver, they had such a great relationship. Aside from the fab chemistry and the push and pull relationship they had. They later go on to become a wonderful alpha couple. I loved their arguments, how Valentin would say things just to get a raise out of Silver and their sweet moments are gahh so freaking adorable. Valentin was breaking my heart in the later half of the book with the amount of love and devotion he showed Silver and Silver no matter what couldn’t stop loving her Valyusha.

The Bears are such an interesting group of people and really nobody parties like the bears. They were hilarious, I loved seeing how different (and in some ways not) they were from the other changelings. They were so much fun.

Apart from the wonderful romance of Mr. I’M A TEDDY BEAR and his starlight, the book also involves the break down of PsyNet and it’s need for humans, along with the continuing plot line of the Consortium and it’s hidden head, the Architect. Tensions and causalities are rising as not everyone is happy with the Psy, the fall of Silence and the trinity accord. Humans who psy treated as inconsequential for the past 100+ years are starting to fight back and with Psy needing humans now, aggression and hatred is running high in certain groups.

Random comments: I love SnowDancer and DarkRiver so it was great seeing how different changeling groups saw them. Silver’s brother, Arwen was so cuteee and so were the twins Pasha and Yasha (Valentin’s seconds). I freaking love Ena Mercant and it was great getting to know more about the elusive and secretive Merchant family.

I loved the writing in this book as well the plot, how certain things were solved in a way that made sense and was startling at the same time. I can’t wait to see who will getting their story next, they are many amazing and interesting individual’s in the P/C world who all seem like a great candidate for the next book.

Overall, a wonderful addition to my favourite series and a fab start to Psy/Changeling Trinity novels.

P.s Excuse the grammar and any typos, I forget how to write properly when I fangirl! Maybe I’ll update the post with my reactions/ quotes I liked while reading the book…