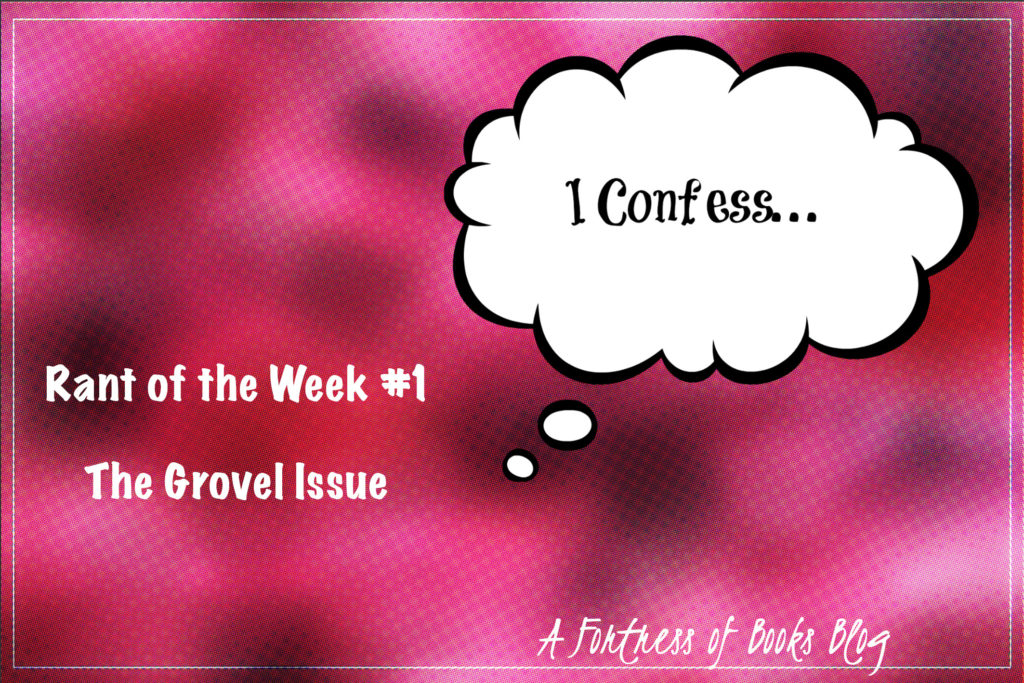 Welcome to a new feature on the blog: The Confessional: Rant/Rave of the Week!!!

Where I’ll be discussing the more of what sometimes leads to lower book ratings, tears of frustration and anger while reading and urge to throw away my kindle and later I hope the complete opposite, raving about whatever I loved that week. I have wanted to do this feature for such a long time but life was busy but I have finally decided to go ahead and confess about things I find displeasing in romance books.

I have been reading romance for a very long time now and if you have ever read a review of mine I almost every time write the quibbles I had while reading the book. This feature on the blog will be focusing more on those quibbles and today I wanted to talk about “Grovelling“.

According to Oxford dictionary: Grovel – VERB

1.1 Act in an obsequious way in order to obtain someone’s forgiveness or favour.

The grovel I’m referring to is asking for forgiveness which is done in response to whatever idiotic decision/act the hero/heroine did, that hurt their significant other leading to the s/o most often breaking up with them and leaving. Most often the idiotic behaviour is displayed the hero and to a lesser degree by the female for plot purposes. It’s understandable that the author wants to create a conflict and separate the couple in order them to sort themselves out or finally accept that they need and love the s/o in the book. However, the grovel and asking for forgiveness done after the act by the H/h leaves me wanting and at times leads me to lower the rating of the book

All I think by the end is: why did she/he forgive him when he didn’t even say sorry ? Sometimes you do get a sorry but it’s literally just that: I’m sorry/forgive me!! Thats it??? Nothing else ?? Are you not going to explain you’re reasoning ?? I’m not asking for huge gestures of forgiveness in every book I read, sometimes it’s needed, other times all that’s needed is a lengthly conversation to proper show their s/o that they are sincerely sorry, explain their actions and show that they do love them.

I really don’t think that’s asking for much especially in cases of books where the entire book the most often it’s the Hero that treats the heroine horribly and doesn’t even bother apologising because either the story made the heroine come back to the hero (for whatever reason) or she just forgives him as soon as he shows up on her doorstep.

Sometimes this grovelling scene are so rushed because they are near the end of the book and often times they just skip it to showing the couple having sex and saying “I love you’s” and “you’re forgiven” at the end. It doesn’t solve anything because they didn’t talk anything out about why the H/h behaved so horribly or show their feelings to their s/o.  The s/o might have forgiven them but all I feel is dissatisfaction. I want to feel happy for the couple and their HEA after finishing the book, not that if only the H/h could have spend a few more sentences explaining their POV to their s/o that would have made the book 5x better for me. This is especially needed in books where you only have either the Hero or heroine POV!!!

I have read some books where the Hero gets scot-free of all the pain and suffering he caused the heroine because for whatever reason the author decided that Hero didn’t need to apologise for his actions??? Why not?? Unless the heroine is a masochist why would she be happy and take the Hero back without any apology for crappy behaviour. It makes no sense to me!

This applies to a quite a few of contemporaries and paranormal books I’ve read.

That being said there are books where the grovel is just happy sigh worthy! You can really see that the Hero is sorry for his behaviour and wants to make it up to the heroine and two books I can think from the top of my head are:

The Unwanted Wife by Natasha AndersThe Hero marries the heroine but treats her horribly because he thinks she tricked him but later realises the truth and tries to win her back but all she wants is a divorce.

The Day of Duchess by Sarah MacLean (Not for people who dislike cheating heroes, I absolutely hate them but this is the only book where I understood where he was coming from, I still hate that it happened!!)

I’ll be talking about the behaviour that causes the grovelling in another issue but for now, I would like to ask authors to PLEASE include a proper grovel so me and my fellow readers aren’t left feeling meh about the couple and dislike for the H/h!

How do you guys feel about grovelling ? If anyone has any books they think either has the best or worst grovel please leave them in the comments below!!!