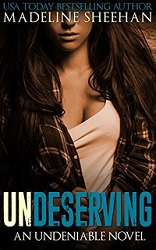 Warning: This isn’t a romance, but instead a tale of love between two despairing people, from two different worlds, both aching for something more.

Debbie Reynolds is a runaway, New York City-bound. Living on the road comes with many challenges—fighting for her next meal, seeking safe places to sleep, and dodging men with less than honorable intentions, all while searching for meaning in a life she finds painful and pointless.

Damon “Preacher” Fox, vice president of the Silver Demons Motorcycle Club, has been in prison for club-related crimes. As his release draws near, he begins to reevaluate his choices in life, realizing that if he stays with the club, this won’t be his last stint behind bars. Suddenly Preacher finds himself doubting everything he’s ever known, wishing for a life beyond the club.

When Preacher and Debbie’s paths cross, they find in each other a sense of peace they had been lacking. But life is about to catch up with Preacher, and Debbie, desperate to keep the one person who’s ever shown her any kindness, finds herself caught between forces far deadlier and more powerful than she could have ever imagined.

This is Debbie and Preacher’s story.

At the end, we should all go back to the beginning,
if only to remind ourselves that we once lived.

“At the end, we should all go back to the beginning, if only to remind ourselves we once lived.” ~ Damon “ Preacher” Fox

I get butterflies in my stomach just by reading that quote…

I couldn’t tell you the day, month or year I added Undeserving to my TBR. It has been sweet torture waiting for Preacher’s story. But the wait was so worth it. Madeline Sheehan outdid herself with Underserving the ways she does with every book. This book was fantastic. I loved every single second from beginning to end.

Undeserving is Preacher’s story. In all honesty he wasn’t someone I paid much interest to throughout the series as I was consumed by the other main characters, but his story is special. Undeserving starts with Preacher as a young man fresh out of prison but wiser and more tired than his years. He is lost and sort of in limbo, and while on the road meets Debbie officially dubbed, Deborah “Darling” Reynolds. Debbie is a character so complex and so human. She’s on the road, young and homeless trying to get to New York City. She is broken, scarred and by fate, density or whatever it is called happens to pick pocket Preacher. And their story begins. What we once thought of Debbie shatters and we truly see who Preacher loved at the beginning.

“She speaks.” Feigning shock, he chuckled. “ Saved your ass back there didn’t I? I’d say that makes us friends.””

What is consuming about this book I feel was Debbie’s character, we get hints of the pain she has endured and it makes you feel sad and your heart cries for her.  At such a young age, she has endured so much and we only see that clearly right at the very end. When it is all too late.  There are so many sides to Debbie her character is truly fascinating. We see a lot of her strength, determination and innocence in this book. It hard not to love her. And Preacher, hell he would give the world to Debbie, so you can’t not fall in love with him.

“If she were a different girl, she guessed that maybe she would be crying right now. But she learned at a young age that tears didn’t change anything. Tears didn’t bring back the people you’d lost, they didn’t heal you when you were hurt or wipe away the ugly memories festering inside of you. And they certainly didn’t replace bags that had gone missing.”

Sheehan writes a story that is soul shattering, heart wrenching but so so beautiful. Undeserving is a special book in the series. It really does show us the beginning when we have met the end. Sheehan gives us a blatant warning, but still if I had a special power it would be to turn the story to a HEA. But this one isn’t. It leaves you empty but oh so full. I loved every second of it. It was so hard to put down, pages were flying, tears were flowing, and my heart was shattering. All I know for sure was the Undeserving was so beautiful, and so worth the read. This series only ever deserves the very best. Madeline Sheehan, the queen of MC Romance has done it a-freaking-gain.

“It isn’t easy to see your parents as people, separate from you. To think that they once had a life before you, that they lived and loved and lost, and everything in between, all before you existed. “