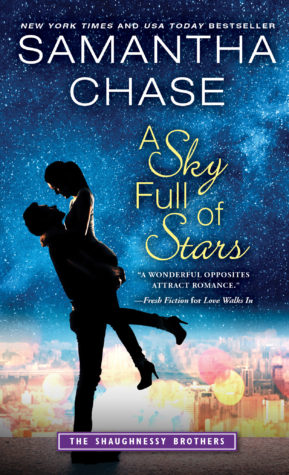 A Sky Full of Stars (The Shaughnessy Brothers, #5) by Samantha Chase
Published by Sourcebooks Casablanca on June 6, 2017
Genres: Contemporary
Buy on Amazon US, Buy on Amazon UK, Buy on itunes, Buy on B&N

The stars are about to align in the newest Shaughnessy brothers romance!

WHEN WORLDS COLLIDE
Brilliant astrophysicist Dr. Owen Shaughnessy feels more connected to the cosmos than to people. He’s great with calculations, but when he leads a team of scientists to study a famous meteor shower, he doesn’t factor in his free-spirited artist assistant Brooke Matthews.

LOVE CAN DAZZLE YOU
Polar opposites in personality, the friction between them threatens to derail the project. But the beauty and mystery of the night sky draw Owen and Brooke together—and she’s going to surprise him in ways the stars never could.

Samantha Chase is a New York Times and USA Today bestseller of contemporary romance. She released her debut novel in 2011 and currently has more than forty titles under her belt! When she’s not working on a new story, she spends her time reading romances, playing way too many games of Scrabble or Solitaire on Facebook, wearing a tiara while playing with her sassy pug Maylene…oh, and spending time with her husband of 25 years and their two sons in North Carolina.