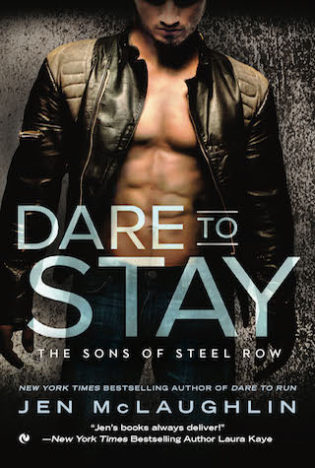 Dare to Stay by Jen McLaughlin
Series: The Sons of Steel Row #2
Published by Signet on August 2nd 2016
Genres: Contemporary, Romance, Suspense
Pages: 336
Buy on Amazon US, Buy on Amazon UK, Buy on Kobo, Buy on itunes, Buy on B&N

The sizzling second novel in the gritty contemporary Sons of Steel Row series from the author of Dare to Run.
Bruised and bloodied on Boston’s mean streets, Chris O’Brien is reeling from the loss of his childhood best friend. But after barely escaping a hit placed on his head, Chris is desperate to live. A safe haven comes to mind—the home of the perfect girl from his childhood, Molly Lachlan. Before he has fully considered what it would mean to involve her in his mess, he finds himself on her doorstep.   When Molly agrees to let Chris inside her home, she realizes she’s also letting him into her life. Danger and desperation are coming off of him like steam, and yet she can’t bring herself to turn him away. His bad boy charm always had a hold on her, but now there’s a soulfulness and sorrow in him that she’s never seen before. And despite the heart-stopping risk of helping him, she hopes against all reason that he’ll stay...

Today we are celebrating the release of DARE TO STAY by Jen McLaughlin. This is the 2nd book in the Sons of Steel Row series. Check out the fantastic excerpt below, and grab your copy now! Visit more sites participating in the release day launch to read more of chapter 1!

The smells of rotting shit, salt water, and dying dreams on the docks of Boston Harbor were all too familiar to me, but even so . . . they made me reflect on my choices every single fucking time. I’d lived in the heart of Boston my whole life, but I’d never taken the time to enjoy the city the way the tourists did. For them, it was all about a celebration of freedom and liberty. It was all memories and American pride and all the shit that goes with it.
For me, the city meant jail time for assault, bloody bar fights, meaningless one-night stands, blackouts from binge drinking, money lost to gambling, lives lost to violence, and shady shipments on the docks at midnight. Which was why I stood here in the dark, with no moon shining brightly, watching a bunch of sweaty men struggle to unload crates from an incongruous shipping container that looked as if it carried car parts but held so much more. The lack of natural light made the job nearly impossible, but we weren’t about to turn on the spotlights so they could see better.
As I watched, I crossed my arms and tapped my foot impatiently. We were well within the allotted time I’d scheduled of twenty minutes, but it felt as if I’d been standing on these smelly-ass docks for hours, watching men grunt and curse at one another for not moving fast enough. They’d probably move a little faster if they stopped throwing nervous glances my way, silently communicating with one another about the “new” guy, fresh outta lockup.
I didn’t have the patience for this type of shit, which was why I didn’t normally oversee this portion of the business. Supervising the weapons shipments was my little brother’s territory, but word had come in that the ATF had been tipped off on the impending shipment of guns. So I’d told Scotty to keep his ass home and I’d take care of things.
To throw the feds off, I’d moved our delivery up, and now I was standing on the docks watching for any suspicious activity . . . in more ways than one. Scotty, on the other hand, had opted to spend his night off trying to get in the pants of some girl he “loved,” attending some lame- ass event to prove he was a “decent” guy.
He wasn’t.
None of us were.
Illegal guns were just part of what we dealt with, for fuck’s sake. That didn’t exactly scream decency to me.
Knowing Scotty, he’d been up front about his employment, tossing the bad-boy element in the girl’s face. It had obviously worked.
Me?
I tended to avoid anything that required more than a slap on the ass and a thank-you as she walked out the door, never to be seen or heard from again. I’d been locked away from society for too long to try for anything else.
Add that to the fact that some little shit had tried to kill me—and almost succeeded—the week before I got out and I was left with the utter inability to trust anyone. Any- where. I couldn’t afford to anymore. I hadn’t figured out whether the attack in prison was personal or business yet, but I knew one thing.
Some prick wanted me six feet under.
Working for our gang, the Sons of Steel Row, under the reins of Tate Daniels, entrepreneur and illegal arms dealer extraordinaire, had taught me a thing or two about when something belonged on the library’s fiction shelves, and when to categorize it as real.
And the threat on my life had nonfiction written all over its cover.

Jen McLaughlin is the New York Times and USA TODAY bestselling author of sexy books with Penguin Random House. Under her pen name, Diane Alberts, she is also a USA TODAY bestselling author of Contemporary Romance with Entangled Publishing. Her first release as Jen McLaughlin, Out of Line, hit the New York Times, USA TODAY and Wall Street Journal lists. She was mentioned in Forbes alongside E. L. James as one of the breakout independent authors to dominate the bestselling lists. She is represented by Louise Fury at The Bent Agency.

Though she lives in the mountains, she really wishes she was surrounded by a hot, sunny beach with crystal-clear water. She lives in Northeast Pennsylvania with her four kids, a husband, a schnauzer mutt, and four cats. Her goal is to write so many well-crafted romance books that even a non-romance reader will know her name.