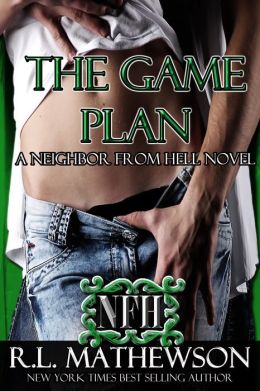 Spend the next 40 years in prison or break her lease early? Normally she’d be able to say that this one was a no-brainer, but things have definitely changed since she was forced to move in across the hall from Danny Bradford.

A lot of things……She wanted to get through one day, just ONE day without Danny Bradford doing something to test the limits to her control, but with that damn smile of his and his habit of leaving her contemplating manslaughter, she didn’t see that happening anytime soon.

He loved his family, but some days…….It was too much, but that was okay, because his small neighbor living across the hallway provided him with endless hours of entertainment. Not on purpose of course, but did it really matter as long she made him smile?

I had been waiting for this book ever since the previous book Truce was released last year. Sad to say I’m disappointed after reading this one.

Jodi is really down on her luck and is living in one of Trevor’s apartment building and her neighbor is none other than Danny Bradford. Danny can’t help but tormenting pretty and attractive neighbor. There’s just something about her that brings out the Bradford within him. Jodi aka Tinkerbelle , lost everything because of her ex-fiance who not only dumped her before the wedding but left her in debt and resulted in her getting fired from her job. Now she’s working as a librarian. Jodi has a problem, all the guys she dates end up becoming her best friends and look at her like a little sister than a prospective girlfriend but it doesn’t really matter that much to her since after the whole fiasco with the Ex she doesn’t want to get married EVER. Danny Bradford is a planner, from a young age he had wanted to be a doctor and a single mistake cost him almost everything. He’s an ex-Marine, he joined the Marine’s after his dreams of becoming a doctor were dashed and returned home only because of his spinal injuries. Danny wants what his cousins have; a wife who loves them, children to equal adore and be terrified of.

Now Danny has decided that Tink is his, he will make her fall in love with him and he has perfect game plan for it.

The book had the usual NFH series things; usual R. L humor, quirky and a extremely good cook for a heroine. It also opposites attract and enemies to lovers trope. The couple had great chemistry, funny banter and ofcourse the book had a very dysfunctional family whose love for food shows no restraint.

Why didn’t enjoy or love this like I did the other books in the series; mainly due to all the repetition in the book for example; Jodi has a bad reaction to medicine which was funny the first time but by the third time it wasn’t amusing anymore and more of an annoyance. Jodi spends almost half of the book in her drugged up state which makes hyper and incapable of rational reasoning. Same goes with the reaction is utter horror after going out to eat with the Bradfords. I would have liked to know what exactly they did to cause that reaction in the heroines rather than reading about it again and again. Then the contradictions in the book, if it was a small thing I would have been able to get past it but it wasn’t. It was about two really important things in the books. Most of the time in books I go with the flow because it’s ‘book life’ and I read paranormal a lot, so I tend to not give much thought to what actually happens in ‘real life’ but I only go so far when it’s keeps on getting pushed on me. Danny’s father, I didn’t like him at all. He was an ass to his son and because of that he made Danny miserable. The thing is he never apologized for his behavior which pushed Danny away. He instead blamed Danny and Danny was ok being responsible for the whole thing, Danny was a child at the time. God, It really irked me especially what happened near the end of the book, it was his father’s fault again.

I think I’ll be in the minority here who didn’t love the book. Overall, this ended up being a ok read, which was funny at the start. The next book in the series will be about Darrin and Marybeth from the looks of the teaser at the end of the book. I will still read the next book since this series is one my favorite romantic comedies and I’m not giving up on it yet.

Hope everyone had a great Christmas, holidays and read books! List your favorite romantic comedies book in the comment section and I will check them out. Mine has to be books by Lynsay Sands, R. L Mattewson and Lauren Layne.