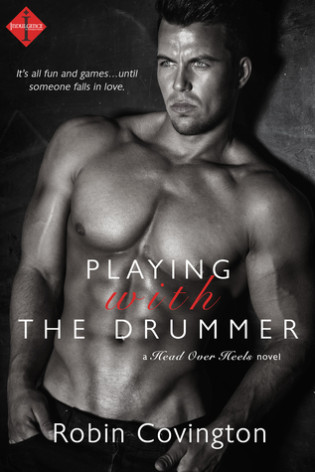 Playing With the Drummer by Robin Covington
Series: Head over Heals #3
Published by Entangled: Indulgence on December 29th 2014
Pages: 236
Format: eARC
Buy on Amazon US, Buy on Amazon UK

Entertainment journalist Lita Matthews is on the verge of making it big. As in her-own-TV-show big. She just needs amazing inside scoop on the year's hottest celebrity wedding. Instead, her big break is becoming a big nightmare—all thanks to rock star Rocky Cardano. Who apparently hasn't gotten over what happened between them four years ago... Rocky is pretty damn familiar with just how far Lita will go for a “scoop.” Hell, their unbelievably hot hook-up in Mexico years ago was the story of a lifetime. Rocky's learned his lessons. He'll do whatever it takes to keep her from the story—even if he has to seduce her to the point of distraction! But Lita has always had a way of getting under his skin. Only this time, he won't be able to just walk away...

Lita Matthews and Rocky Cardano have a history unknown to their friends. They had an affair four years ago which ended badly to say the least, it left both parties heart broken and feeling betrayed.

Lita Matthews is a journalist, who is so close to getting own Television show. She’s covering her best friends’s sisters wedding as a assignment. Her parents are famous and she grew up in the Hollywood environment hence she’s in a way jaded with all the games and manipulations and doesn’t believe in love.

Rocky Cardano is a drummer for the band ‘The Rift’. He avoids the press and media like they are the plague. He guards his privacy and doesn’t want Lita to ruin his friends wedding with her schemes.

Lita and Rocky both met in mexcio where they were both hiding and dealing with some issues at the time, they didn’t tell each other their real identity till after they slept together a couple of times. Finding out who the other person lead to arguments and ultimately their break up.

I liked Lita, I thought she was great though she could be a bit of hothead and slightly emotional. Yes, she made a mistake but she owned upto it and apologized several times, she grew up but Rocky didn’t let it go. I did think that they moved too fast considering they not resolved any of their issues when they jumped back into bed which was what led their break up before (great sex but not much of understanding between them)

Lita and Rocky had great chemistry together and it was amusing to see their banter. which all had the undertone of heartbreak, anger and lust.

Quibbles: This wasn’t listed as a part of a series so I thought this was a standalone but it isn’t, its the third book in a series which meant that not only the characters had a history that was of-script but they were also it seems part of the earlier books and had some scenes there. So I felt I was missing quite a lot. Rocky’s behavior near the end made me mad:

I mean really, I thought you were in loovvveee Rocky then what the hell dude? I needed him to grovel more. Lita should have made him work harder and that ending felt too easy.

Overall, though I had a couple of issues, it was good story if a little predictable and too easy at times.