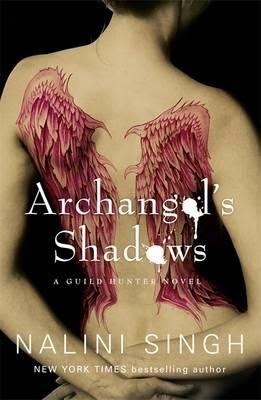 In the wake of a brutal war, the archangel Raphael and his hunter consort, Elena, are dealing with the treacherously shifting tides of archangelic politics and the people of a battered but not broken city. The last thing their city needs is more death, especially not a death that bears the eerie signature of an insane enemy archangel who cannot – should not– be walking the streets. This hunt must be undertaken with stealth and without alerting their people. It must be handled by those who can become shadows themselves…

Ash is a gifted tracker and a woman cursed with the ability to sense the secrets of anyone she touches. But there’s one man she knows all too well without a single instant of skin contact: Janvier, the dangerously sexy Cajun vampire who has fascinated and infuriated her for years. Now, as they track down a merciless killer, their cat-and-mouse game of flirtation and provocation has turned into a profound one of the heart. And this time, it is Ash’s secret, dark and terrible, that threatens to destroy them both.

This is the seventh book in the series. This time its about Ash and Janvier with the rest of the gang also getting few scenes here and there but it mainly focuses on Ashwini and Janvier. We first saw Ash and Janvier together in a novella at the start of the series Angels’ Pawn: A Guild Hunter Novella and over time we have been given glimpses very fascinating ones I might add about what they have been upto. It’s about time that they got their own book.

Ash is a guild hunter with a gift, she can in a way read people’s secrets mostly very dark and twisted ones due to her line of work. Ash was described in the previous books as a eccentric, blood thirsty and ‘crazy’. Ash has always been a fascinating character, from the way she is described by her friends in the previous book and the way she was in Angels Pawn. She is a very competent fighter, a independent women with a hidden soft and vulnerable side that you can’t help but love.

Janvier also known as just ‘Cajun’ is a vampire who is said to very charming and easy to like. Janvier is relatively young to the other vampires in the cast of the series, yet is powerful with connections to more powerful individuals. He always manged to get back in the good graces of the angels he pissed off which in turn pissed Ash off when was charged with hunting him down. I thought he was very laid back, possessive of Ash and funny.

“Such a conscientious landlord. Would you fix the plumbing too?”

“If you let me put my pipe in your sprocket.” Pure wickedness in his smile at her groan.

Ash and Janvier relationship are just lovely together, they understand and love each other for who they really are. Though they were the protagonist in this book, their relationship started since the first moment they met which was about four years ago in the series timeline. They flirted, fought and shared many moments together which is why though only ‘officially’ get together in this book they have been in essence in a relationship for four years though Ash refuses to take the last step, her reasons where valid and I really liked how Nalini handled it and gave Ash her happy ending. I thought their relationship was adorable and in a way frenemies to lovers.

“Don’t get too cocky, cuddlebunny.”

His grin was bright. “What’s a cuddlebunny?” he asked, genuinely curious.

The book also has a few scenes of the main couple of series Raphael and Elena and how they dealing with the aftermath of the last Book Archangel’s legion where they fought Lijuan. It does not matter either they get a whole book or just glimpses, I just love reading about them.

We also get a different look on Naasir, Aodhan and Ilium. Aodhan is finally getting out of his shell with the help of his best friend Ilium. Ilium on the other hand is no longer the young and happy-g0-lucky angel he was at start of the series, he’s changing, growing into power and this has effected his personality . Previously not much was known about Naasir, this was rectified in this book where we get hints of his past along with scenes of him a child. Naasir is a very interesting character and he is very different to others in Rapheal seven not just because of what he is but who he is as a person. He’s a little psycho, a very beautiful one at that. Really looking forward to reading about him and him finding his ‘mate’. All his scenes made me smile.

Raphael on Naasir:  “He is a wild creature in an elegant, civilized city.”Naasir said with a shrug. “We pretend to like people until we get hungry and want fresh meat.” A glance around, a glint in his eye. “I honestly do like you all. I haven’t thought about eating you for at least two centuries.”

The book also felt like one of the earlier books in the series like Angels’ Blood: The Guild Hunter Series

, maybe because it takes place between the lull after the ending of the war and the events from the previous book Archangel’s Legion: A Guild Hunter Novel

Quibbles: I would have liked a bit more scenes of Elena & Raphael though we get a few I just wanted more since I love them and bit more of Mahiya & Jason who I thought were the only ones who did not get a scene. The ending for some reason felt a bit rushed to me.

Overall this was another good edition the series and cannot wait till the next book which of-course is JUST A YEAR AWAY. I really want to know who gets the next book in the series. Happy Reading!

What did you guys think of the latest installment of the guild hunter series?