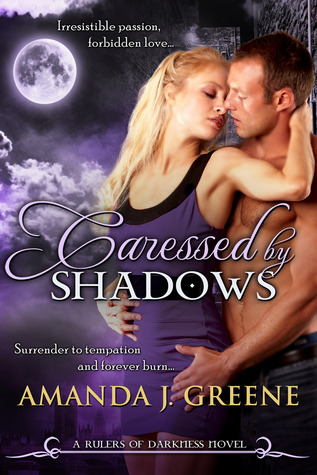 Black Knight, Falcon Kenwrec is powerful, relentless, and fiercely loyal, his only allegiance – to his king. But he is torn between duty and desire when the war between the vampire clans and the Red Order hunters escalates and the enemy captures the one woman he longs to claim as his own, Sonya Rebane, Queen of the Voidukas Clan. Falcon will risk everything to save her, even if it means forsaking his king.

After weeks of imprisonment, Sonya is stunned when the chivalrous knight that she has secretly loved from afar appears outside her cell. As they fight and struggle to elude their enemies, they must battle their overwhelming attraction for each other and their love that is forbidden.

As every perilous moment draws them closer together, every smoldering kiss drives them to the brink of a passionate destruction. Will they be able to resist temptation? Or will their love be their ruin?

This is the fourth book in the Rulers of Darkness series. The series involves the stories of each ruler of the different vampire clans. All the rulers have a time limit on their reign as after two hundreds the curse starts affecting their lives and they are longer capable of taking care of themselves let alone leading their clans. The book is about the remaining ruler and only queen in the vampire clans Sonya and a black knight Falcon.

Falcon Kenwrec is a black knight and second in heir for the Hadrian King of the Validus Clan who was the hero in the previous book Caressed by a Crimson Moon. He is very fiercely loyal which was shown in the last book as he rather than take the crown himself kept the peace in clan and remained loyal to his sire Hadrian who at that time was going mad.

Falcon’s internal monologue: “He would barter what remained of his soul to save his Sonya.”

Sonya Rebane is the Queen of the Voidukas Clan, known as the warrior queen. She is also the reason that there are no longer any werewolves in the world because she killed all of them because of them butchering her family. She has been in love with Falcon since meeting him years ago.

Sonya to Falcon: “I’ve loved you for two hundred years and I will never stop loving you.”

They have in love with each other since meeting fifteen hundred years ago. And with every moment that passes their love for each other grows. Though they have denying their love because a black knight and the queen can’t be together and the punishment for which is quite severe.

Falcon: “You would be stripped of your title and banished as an outcaste,” he said, his voice low and rough.

Sonya: “And you would be sentenced to death.”

In the last book, Sonya allows herself to be kidnapped by the witches because of the shaman. Falcon goes alone to save her. Which was good not in the sense that poor Falcon had to save her without any help which he did quite splendidly I believe but because it gave them time alone together.

This a book that I had been waiting for quite a while now and I do think that the author did the character and their story justice. From the get go we see the connection that Sonya and Falcon have. As the story progressed we see how much they truly love and care about each other.  There are some interesting twists and turns to keep the reader guessing of how and if they would actually end up together.

We see glimpses of other future couples like the shaman witch and Gabriel’s second and Gabriel’s and the singer girl from the bar I believe will be his heroine.

Overall I really liked the book, the book has action, some sexy times and some emotional moments. The book had the right amount of everything to make it a great PNR read. I can’t wait for Gabriel’s book who I believe will get the next book. Happy reading!