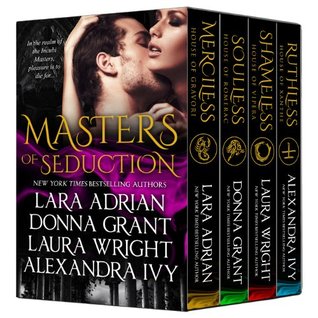 In the realm of the Incubi Masters, pleasure is to die for and love is the deadliest game of all . . .

This all-new, never-before-published boxed set contains the first four novellas in the Masters of Seduction series. Each book in the collection is approximately 20-25,000 words.

This anthology is by Four author who have successful PNR series going on and it so happens, I’ve read all those series and really liked them so when I saw that they had a book coming out it was no brainier to get it.

General synopsis of the series is that they are two species, the Incubi and the Nephilim who need each other to procreate and their survival since the Incubi are all males and the Nephilim all females. Most of this procreation does not happen as a result of mating but in harem where some Nephilim are chosen to serve the Incubi and carry the children, the female children are kept by the Nephilim and the males ones by the Incubi. The Incubi’s have masters of houses (hence the name of the book) and in this anthology we see four of the masters find their ‘mates’ and fall in love or vice versa. So all the books have a certain element of instant love/sexual attraction since they are all relatively short. And without which I don’t think the stories would have worked so well. The books should also be read in order to understand since they precede the events of the previous books and help to understand the Arch of the series.

Merciless: House of Gravori by Lara Adrian: Rating~ 3.5 stars.
This is the first story in the book and where we meet Devlin (Master of the Incubi house Gravori) and Nahiri (a Nephilim blade, a warrior of Nephilim. Devlin visits the temple where three Nephilim priestesses hold court, he wants vengeance for his brothers death and since the priestesses don’t give the truth he kidnaps Nahiri to avenge his brother’s death but this leads him to falling in love and finding out the conspiracy, that is the overarching plot of the whole series.

Soulless: House of Romerac by Donna Grant: Rating ~ 4 stars.
This story is Canaan (Master of Romerac) who escapes from the prison where he was kept for the last five hundred years because of his brothers betrayal and Rayna (a Nephilim) who leaves her family to live in a small village because she does not want to be ‘chosen’ for the harem like her twin sister. Rayna helps Canaan reach his home and during this time they grew close and fall in love.

Shameless: House of Vipera by Laura Wright: Rating ~ 3 stars
This story is slightly different as Scarus (Master of Vipera) is growing weak because he has not had sex since the Nephilim he had a child with died and hence is visiting the harem where he meets Rosamund (a Nephilim) who does not want to be in the harem but rather with her human boyfriend who she left when she was chosen hence she changes her appearance to appear dirty and ugly like the witch from snow white 😛 and is waiting for the year to be over so that she could go back her human. Scarus and Rosamund share a connection when they meet even though they both don’t want to. The only thing that bugged me about this was after waiting almost an year to return to her human Rosamund quickly falls in love with Scarus, it made her seem a bit fickle in my opinion.

Ruthless: House of Xanthe by Alexandra Ivy: Rating ~ 4 stars
Jian (Master of Xanthe) is an spy who is looking into the conspiracy and gathering information on it when he ends up in the gate leading to the prison where Canaan was kept and meets Muriel (the Mistress of the prison) who we meet in the second book in the series. They unearth some secrets while trying to escape the prison and falling in love.

The stories are all relatively short, enjoyable and easy to read. It also did not take very long to finish reading all of them.