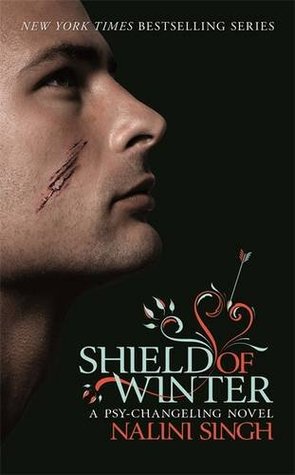 Assassin. Soldier. Arrow. That is who Vasic is, who he will always be. His soul drenched in blood, his conscience heavy with the weight of all he's done, he exists in the shadows, far from the hope his people can almost touch - if only they do not first drown in the murderous insanity of a lethal contagion. To stop the wave of death, Vasic must complete the simplest and most difficult mission of his life.
For if the Psy race is to survive, the empaths must wake...
Having rebuilt her life after medical 'treatment' that violated her mind and sought to stifle her abilities, Ivy should have run from the black-clad Arrow with eyes of winter frost. But Ivy Jane has never done what she should. Now, she'll fight for her people, and for this Arrow who stands as her living shield, yet believes he is beyond redemption.
But as the world turns to screaming crimson, even Ivy's fierce will may not be enough to save Vasic from the cold darkness...

I know as with many fans of the series we were all eagerly waiting for Vasic’s book to be released (ever since he said he was tired, and seemed suicidal and some of us were greatly disappointed that he wasn’t going to end up with Aden). SoW is mainly about Vasic an arrow and Ivy an empath psy, but we see alot of our favorite changeling packs and Psy’s world where we see the impact of what happened in the last book.

While I did love Vasic and Ivy’s story it was different than other other Psy books like for e.g. Judd and Kaleb’s. In those books we saw Judd and Kaleb kind of learning about emotions and understanding them but at the same time they were very much still in silence in the way they interacted with others apart from their heroines. Vasic is different in that aspect though he did not quite understand emotions like hope but he had someone who kept him from feeling lonely, his friendship with Aden which saved him from a difficult childhood and later with the morality of what they were doing for their race. To me it felt like Vasic and Ivy’s relationship came about very easy and without much conflict. It could be because the end of silence or just because they both could feel without any restraints, especially with all the understanding and emotional backbone that Ivy had. Their falling in love was sweet and cute.

I really loved all the scenes that showed the previous characters since it showed what they had been up to and their meetings were all constructed very well to include the overall arc of the series and its effects.

In the end, this was a great read and I can’t wait for the next book in the series (Aden’s). Happy reading!