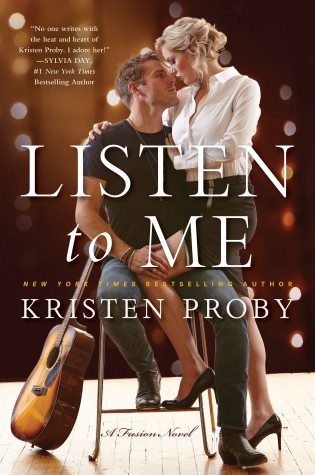 In New York Times and USA Today bestselling author Kristen Proby’s brand new series, five best friends open a hot new restaurant, but one of them gets much more than she bargained for when a sexy former rock star walks through the doors—and into her heart.
Seduction is quickly becoming the hottest new restaurant in Portland, and Addison Wade is proud to claim 1/5 of the credit. She’s determined to make it a success and can’t think of a better way to bring in new customers than live music. But when former rock star Jake Keller swaggers through the doors to apply for the weekend gig, she knows she’s in trouble. Addie instantly recognizes him—his posters were plastered all over her bedroom walls in high school—he’s all bad boy...exactly her type and exactly what she doesn’t need.
Jake Keller walked away from the limelight five years ago and yearns to return to what’s always driven him: the music. If he gets to work for a smart-mouthed, funny-as-hell bombshell, all the better. But talking Addie into giving him the job is far easier than persuading her that he wants more than a romp in her bed. Just when she begins to drop her walls, Jake’s past finally catches up with him.
Will Addie be torn apart once again or will Jake be able to convince her to drown out her doubts and listen to her heart?

Kristen Proby is known for writing heartfelt characters with deep connections and sizzling passion. This April, she will seduce readers’ senses with a brand new series, Fusion, from William Morrow Paperbacks, in which five best friends open a hot new restaurant together. Today, we are thrilled to bring you a song written exclusively for LISTEN TO ME, the first book in the Fusion Series releasing April 12, 2016. LISTEN TO ME finds a hot former rock star looking for a steady gig at the restaurant, but he’ll have to convince the prickly front-of-house manager to take a chance on him—with her business and her heart. Don’t miss what Kristen has to say about the beautiful ballad, If I Had Never Met You, and then grab your copy of the song and preorder the novel today!

A Message from Kristen about If I Had Never Met You:

From the minute song writer Jake Keller lays eyes on Addison Wade, a tune sets up residence in his head. As he gets to know her, the tune becomes a song. Their song. Addie’s song. The stakes are the highest they’ve ever been for him when he finally sings it to her, but will it be enough to keep her?
​
I can’t thank​ Brad Yunek and Dan Keseloff enough for writing this beautiful song to accompany Jake and Addie’s story. I hope you love it as much as I do!

Listen to a sample of If I Had Never Met You here!

If I Had Never Met You is now available on iTunes, Google Play, and Amazon for just $.99!