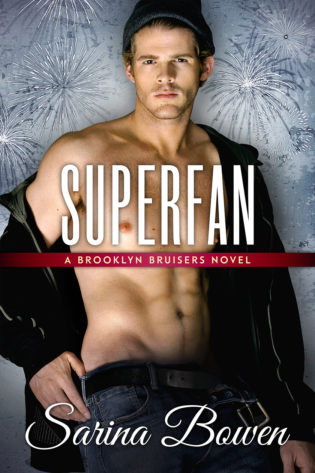 A new standalone novel in the Brooklyn Bruisers world!Sometimes lady luck shakes your hand, and sometimes she smacks your face. Sometimes she does both on the same day.
Three years ago I met the most amazing girl in the world. We were both down on our luck. Then I got that call—the one that tells you to get your buns on a plane to go meet your destiny.
But the girl was left behind. I didn’t have her phone number, and she didn’t know my real name.
While I became a professional hockey player, she became a superstar, with platinum records and legions of fans. And a slick, music producer boyfriend who treated her badly.
But fate wasn’t done with us yet. When Delilah turns up at a hockey game, I can’t resist making contact. The internet swoons when I ask her out on a date.
She might not remember me. But her jerkface ex does. He’ll do anything to keep us apart.
Good thing athletes never give up. This time I’m playing to win.


Delilah Spark is a famous singer/songwriter, she’s stuck in a horrible contract with her managing company with an equally horrible ex and isn’t really in a place to start a relationship. Silas Kelly is the goalie for Brooklyn bruisers. He also happens to be a SUPERFAN of Delilah, which is the source of constant teasing by his fellow teammates.

This was such a delightful book, lovely characters, swoon worthy hero and a sweet couple, overall a great rom com read!

Silas, he’s such a great hero. He’s a great, funny, romantic, calm guy and a complete goner for Delilah. He really loves her, wants to be there for her, support her and is an all around sweetheart. Delilah is also a great girl, she’s extremely talented and confident about her work but is also isolated and has no real friends apart from her publicist Becky. I feel that Silas really made her life more colourful and full of love and laughter. Despite the fact that they are both popular and wealthy, they were just so easy to connect to. I liked that their conflict was more outer factors than themselves, and while the conflict was somewhat predictable but it was still enjoyable.

I really adored both of them together. It seems like theres never a perfect time for them to be together. From the first time they met, when they both chasing their dreams to the now famous popstar and NFL drafted goalie, fate seems to enjoy putting them together at the worst times. I enjoyed their flashbacks to when they met before they become successful and achieved their dreams, it was sweet seeing them being flirty and become friends.

Sarina Bowen did a great job with this one. Anyone looking for a fun, light, low on angst contemporary with wonderful characters and sweet romance would enjoy this one! You can definitely read this as a standalone. However, why would you not want to read about the rest of the Brooklyn bruisers players as well.

P.s Delilah and the Sparkle puppies would be a hit, who doesn’t love good music and puppies. And pretty sure if men like Silas existed, I’d be a superfan of the male population.