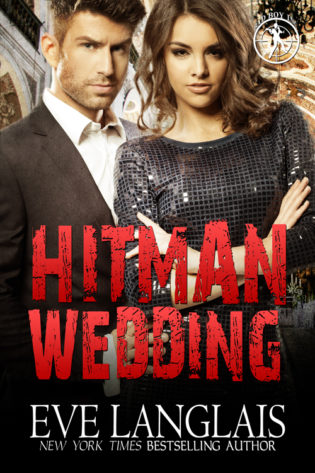 The employees of Bad Boy Inc. are gathering for a celebration. The bride sported the latest in bullet proof corsets. The groom wore a gun. The guests came armed for action. But the cake blew up before they could eat it. As for the honeymoon, it’s going to be a mad chase across the globe dodging bullets and bombs to find the culprit who wants them all dead.

Once upon a time, Darren fell for a woman while in the world’s most romantic city. In full view of the Eiffel tower he had his heart torn from his chest and stomped on.

Time for revenge. Francesca played Darren for a fool, but he won’t let it happen again. Now that he’s found her, she’s going to pay for her actions. Problem is she’s getting under his skin. Rubbing against his skin. Making him remember those Paris days and hotter nights.

Before he can decide if he’s crazy enough to fall in love with her again, everything explodes after the wedding.

“Keep away.” Francesca snarled the warning, her gun aimed at Kacy’s face.

The petite Latina with a cool composure probably inherited from a cat, didn’t look daunted at all to be facing down the barrel of a gun. “I’m not here to kill you. Just making sure you aren’t planning to shoot Darren.” Darren being Kacy’s boss. And Francesca’s ex-lover.

“I should. It would make things easier.” So much so if all Francesca needed was to shoot him. “He wasn’t supposed to be here. He ruined everything.” Ruined it with his angry glares–and reminders of a time when those lips used to purse in pleasure, not disdain.

“What’s wrong? Did your new boyfriend not like the one you dumped showing up?” The wind snatched the words from Kacy’s mouth, but the woman stood close enough for Francesca to hear them.

“You don’t understand. No one does. There’s more at stake than you know.”

“Then perhaps you should explain.”

How to make clear that she had no choice? “I was trying, but the Stefanov arrived. He didn’t take kindly to Darren’s treatment of me.” A well-deserved harangue, given what she’d done to him. Some men had a hard time letting go.

“Was that the plan all along? To have Stefanov lure Darren to this island so he could kill him?”

“What? Of course not.” If Francesca wanted Darren dead, she’d do it herself. “You shouldn’t speculate on things you know nothing about.”

“I know that someone is trying to kill Darren, and right about now, you and Stefanov seem like the most likely suspects.”

Stefanov might have his own agenda, but her? “I’m not trying to kill him.” She might be the only one other than Kacy who wasn’t.

“Weren’t you the one claiming the killer was on this island? How else would you know unless it’s you or your new boyfriend?”

The conversation was going nowhere, and Francesca recognized it for what it was. A stalling tactic. She kept her gun steady even when it startled by the arrival of a new player.

“Francesca isn’t the one behind the murder attempts.” Darren’s voice cut through the storm–cold, angry.

She didn’t even think about it, simply angled the gun away from Kacy and pointed it at Darren.

Not one of her brightest moves.

The petite Kacy wasn’t one to waste an opportunity. She lunged forward, thrusting out and punching Francesca in the tit. It shocked more than it hurt and drew a gasp from Francesca. Her fingers loosened enough that Kacy knocked the gun from her hand.

But Francesca didn’t retaliate. Didn’t wipe the smug smirk off Kacy’s face, mostly because she knew that fighting wouldn’t win her this battle.

Catch up on the Series:

New York Times and USA Today Bestseller Eve Langlais is a Canadian author who loves to write hot romance. She likes to blame her twisted imagination for her sarcastic sense of humor which tends to heavily influence her stories. She loves to write, and while she might not always know what her mind is going to come up with next, she does promise it will be fun, probably humorous and most of all romantic, because she believes in a happily ever after.

Excerpt: When An Omega Snaps by Eve Langlais + Giveaway!