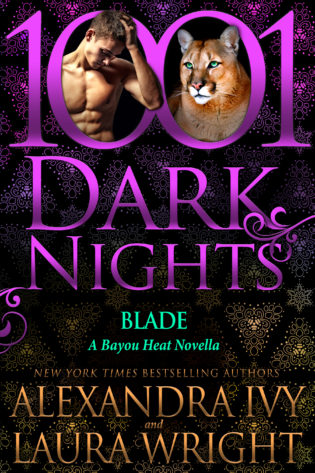 Sexy Suit, Blade was held captive and abused for decades. Benson Enterprises was desperate to use his superior blood to create super soldiers. But when he’s finally rescued, he can’t return to the Wildlands with the other prisoners. Not without the female he was forced to watch being impregnated. The female who has gone missing.

Beautiful and broken, Valli just wants to run away and never look back. But with the shocking news of her pregnancy fresh in her mind, she wonders if that’s even possible. Told by her captors that one of the caged animals assaulted her, she knows she must do everything in her power to keep her unborn child safe. But when a glorious male tracks her down and claims her and her baby as his own, will she have the strength to walk away?

The new Bayou Heat novella tells the story of Blade, a suit that was previously taken captive by the Benson company and later used in their experiments to make super-soldiers. Previously, we see him being rescued and taken back to Wildlands to recover. While he would prefer not to talk and remember about his time as a captive, Blade remembers vividly of the human female who was impregnated by his sperm.

Valli had come to Benson’s to be cured of the terminal disease she had, not realising that this would require blood from the panthera or that she would non-consensually become pregnant with a panthera’s child.

Blade has been searching for Valli, he is desperate to find the woman carrying his cub, he hopes that they could both find common ground and take care of his cub but Valli’s messed up memories of the time in the hospitals makes Blade the villain in the story.

I really liked Blade, though I do wish (and it isn’t possible with the word limit of these novella’s) is that we could have gotten a bit more of his feelings and what he went through when he was caged and what was up with his parents not really being much of actual parents. I also liked Valli, she had no one and had only herself to depend upon her entire life so it made sense why she at the start was reluctant to take the goodness she saw in the panthera at face value but they both worked through their issues. I liked how their relationship developed. Obviously with the connection they shared, the chemistry they had they both gave into each other easily but things as always get complicated when Valli ends up being in danger again.

I really enjoy these shorts, they are easy to get lost into, have good action and romance balance even though a part of me can’t help but wish that these stories were a little longer so I could enjoy all aspects and spend more time with the characters.  Regardless of that, Blade is a good addition to the series!