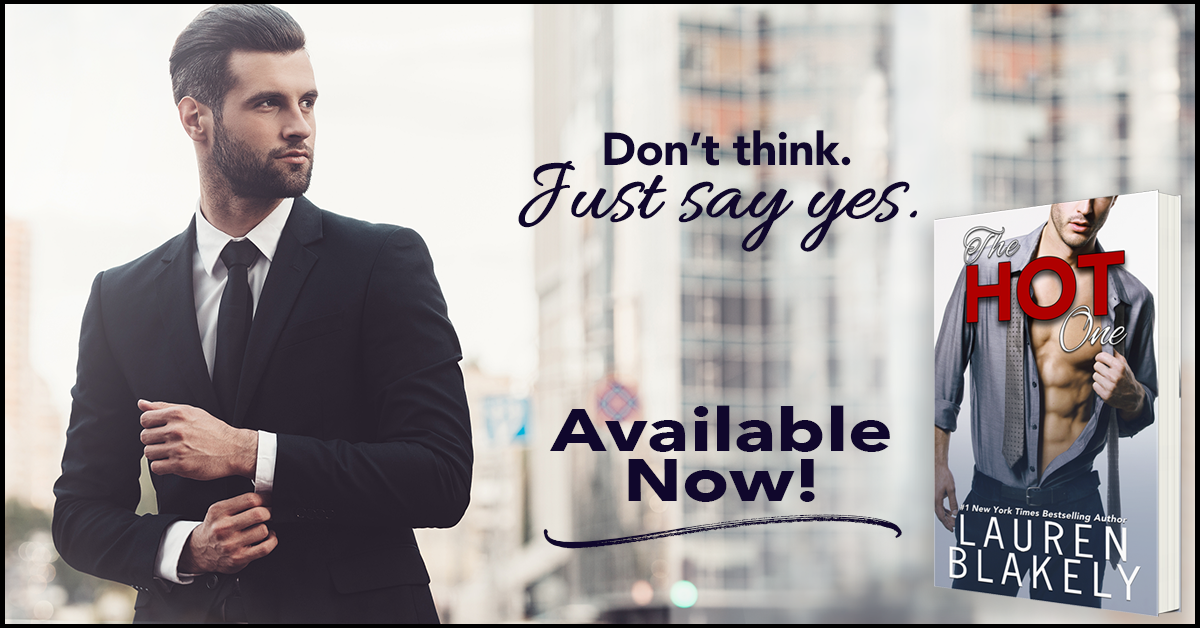 The Hot One by Lauren Blakely
Published by Self Published on February 27th 2017
Genres: Contemporary, Romance, Romantic Comedy
Format: eARC
Source: the Author
Buy on Amazon US, Buy on Amazon UK, Buy on Kobo, Buy on itunes, Buy on B&N

A sexy new standalone romance from #1 New York Times Bestselling Author Lauren Blakely...
Ever notice that sometimes a guy will do something really stupid, like let the love of his life slip through his fingers?
Yeah. I'm that guy. But the moment I run into the woman I once loved madly, I’ve got one goal and one goal only—a second chance. The plan? Go big or go home.
Fine, at first glance, stripping naked at my ex-girlfriend's place of work might not seem like the brightest way to win her heart again. But trust me on this count—she always liked me best without any clothes on. And you've got to play to your strengths when you're fighting an uphill battle. As a lawyer, I know how to fight, and I'm prepared to fight hard for her. Because sometimes you need a second chance at first love.
He's the one who got away . . . The nerve of Tyler Nichols to reappear like that at my job, showing off his rock-hard body that drove me wild far too many nights. That man with his knowing grin and mischievous eyes is nothing but a cocky jerk to saunter back into my life. Except, what if he's not . . .? I've tried like hell to forget him, but maybe I'm cursed to remember the guy I fell madly in love with eight years ago. Lord knows I’m not over him, so what's the harm in giving him a week to prove he's changed in the ways that matter?
After all, how do you resist the hot one…

Tyler Nichols is an entertainment lawyer, working with his cousin Clay at their firm.  Delany Stewart is the owner of Nirvana, a spa company. They went to law school together and were madly in love till Tyler broke Delany’s heart and cut her entirely out of his life. Seeing him juggling for a seven year old after eight years since they broke up, a girl who looks just like him makes Delany feel like someone stepped on her heart. Delany and Tyler never got over each other while Tyler regretted his decision, Delany was heartbroken and spend the past eight years trying to get over him.

“He kisses me like it’s the only thing on earth he wants to do.”  ~Delany

Seeing Delany, Tyler decides to get back with her….with his usual method which is jumping before looking and without any caution. With some tug and push he finally get’s Delany agree to go out for drinks with him.

I loved her like crazy in college, and when we talk now, I can still hear the parts of her that I fell for. ~Tyler

As with usually with Lauren Blakely’s books, this couple had great chemistry, the book had humor and a little bit of angst to make it interesting. Their relationship for most past was quite easy, it was natural for them just to slip back into their role. I loved their banter and sweet moments along with Tyler’s crazy and impulsive behaviour. Usually it’s the girl who is the impulsive one in the books so it made for a nice change. I really liked seeing Tyler with his niece, I wish we could have gotten to see him, Delany and Carly together. It would have been hella cute.  It’s a second chance romance about a couple who never forgot each other and couldn’t move on.  I really liked them together.

“It was always you. I always thought of you.” ~Delany

Quibbles: I don’t know exactly why but I felt like it was missing something that Lauren Blakely’s books usually have, I had this feeling throughout the book. I still don’t know why….Another thing I wish the book’s timeline had been a bit longer and made Tyler grovel more to Delany.

Overall, it was a lighthearted, fun and quick read about an adorable couple.