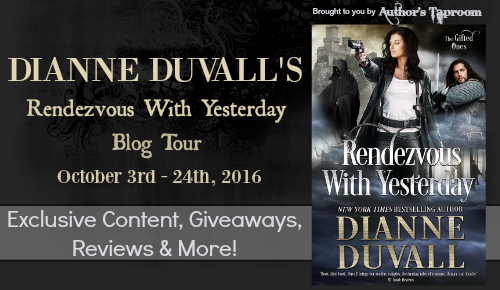 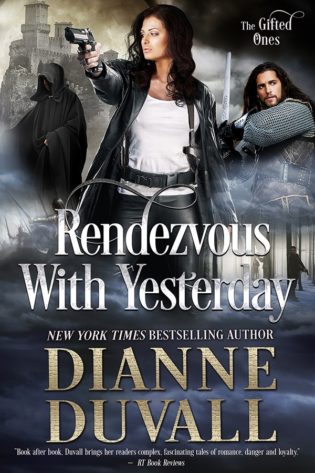 Rendezvous With Yesterday by Dianne Duvall
Series: The Gifted Ones #2
Published by Self Published on October 17th 2016
Genres: Fantasy, Historical, Medieval, Romance
Buy on Amazon US, Buy on Amazon UK, Buy on Kobo, Buy on B&N

Modern-day bounty hunter Bethany Bennett helps her brother track two fugitives to a forest outside of Houston, Texas. But what should have been a routine apprehension of two bail skippers spirals out of control and ends in violence. After Beth and her brother are both seriously injured, a mysterious figure suddenly looms over her. And, when the smoke clears, Beth finds herself not only in another place, but in another time.
As Lord Robert, Earl of Fosterly, attempts to identify and track down the nameless enemy who has been plaguing his lands and people with violence, the most peculiar woman stumbles into his path. Small, vulnerable, yet possessed of a bold, fiery spirit and wicked sense of humor, she persists in dubbing Robert and his men members of something called a medieval reenactment group . . . until she sees his castle and labels herself mad. It seems bounty hunter Bethany Bennett has come to him from the future, bringing with her laughter and chaos, swiftly winning the hearts of his people and inspiring within him a love he thought he would never experience again. But when Robert discovers a way for her to return to her time, will the love they share be enough to keep them together?

Thank you for joining me!  I’m very happy to be here at A Fortress of Books, celebrating the release of my time travel romance RENDEZVOUS WITH YESTERDAY, the second book in my new series The Gifted Ones.  Often when I release a new book, I like to introduce readers to the characters they’ll find in it via character interviews.  While many authors interview their characters themselves, I prefer to let my characters interview each other . . . which poses a bit of a challenge for me this time.  The bulk of RENDEZVOUS WITH YESTERDAY takes place in 13th century England, and men and women in the Middle Ages didn’t interview each other for e-newsletters.  So I’ve decided to let Sheldon (a popular human in my Immortal Guardians paranormal romance series) interview Seth, the Immortal Guardians leader who also appears in RENDEZVOUS WITH YESTERDAY.   Seth has lived a very long time.  😉

SHELDON:  Yeah.  The mortals that work for you down at The Network have been pretty anxious lately.

SETH:  Quite an understatement, based on what I’ve observed.

SHELDON:  Well, they’re all a little shell-shocked after recent events.  So I thought some interviews would help ease their renewed wariness around you guys a bit.  Some of them are finding the whole all-powerful-immortal thing a tad intimidating once more.

SETH:  Understandable.  I have a few minutes to spare, if you have any questions you’d like to ask me.

SHELDON:  Really?  That’d be great.  I actually just finished interviewing Marcus.  You know how curious everyone is about his background.

SETH:  *smiles*  Because he met a woman from this century over eight hundred years ago?

SHELDON:  Exactly.  I mean, how many people can say they’ve met a time traveler?

SHELDON:  Which brings me to my first question.  Bethany Bennett was a woman from our time who traveled back to the past and met Lord Robert around the turn of the 13th century when Marcus was still mortal and squiring for him.  Is that right?

SHELDON:  How did she go back in time?  Marcus said you’d tell me.

SETH:  He said that?

SETH:  No.  There’s too much weird crap up there.  But Marcus wouldn’t lie about a thing like that.

SHELDON:  *laughs*  You aren’t going to tell me how she did it, are you?

SHELDON:  I thought so, but it was worth a try.  So, what can you tell me about Robert?

SETH:  I liked him.  He was a good man.  Fiercely loyal to those he loved.  Brave in battle.  And very talented with a sword.  I think, by the time Beth met him, Robert could only be bested in combat by his brother Dillon.

SETH:  *grins*  Yes.  I admired both men.  And Robert proved to be instrumental in helping Dillon and Alyssa find happiness together, so . . .

SHELDON:  Alyssa was a gifted one.

SHELDON:  Would you explain what that is for the newbie’s at The Network?

SETH:  Gifted ones are men and women who were born with extremely advanced DNA that lends them special gifts that ordinary humans lack.  Alyssa, for example, could heal with her hands.

SHELDON:  I so wish I could teleport.

SETH:  I admit that’s a favorite of mine.

SHELDON:  What is the source of gifted ones’ advanced DNA?

SETH:  You’ve asked me that before and know I won’t tell you.

SHELDON:  Because bloodshed always follows when you do?

SHELDON:  Dude, that is so annoyingly cryptic.

SHELDON:  Fine.  So you liked Robert.  What about Bethany?  Did you like her?

SETH:  I did indeed.

SETH:  She reminded me a bit of Krysta, or Heather.

SHELDON:  I assumed you mean Étienne’s Krysta and Ethan’s Heather?

SHELDON:  Strong women are so hot.

SHELDON:  I guess Bethany would’ve had to be strong, since she was a bounty hunter.

SETH:  Yes.  And I thought she handled unexpectedly landing in the Middle Ages remarkably well.

SHELDON:  *laughs *  What else can you tell me about her?

SETH:  *smiles *  She was funny, with a teasing, mischievous nature that often sparked smiles and laughter.

SHELDON:  I’ll ask you the same thing I asked Marcus.  Did she have a hard time adhering to the tighter social strictures of the time?

SETH:  *laughs*  What makes you think she adhered to them?

SETH:  *grins*  I remember one time she— *breaks off and frowns when his cell phone vibrates, then retrieves it from a back pocket*  I’m sorry.  I have to take this.

SETH:  Oui?  *listens for a moment, then addresses Sheldon*  I’m needed in France.

SHELDON:  Okay.  Thanks for the— 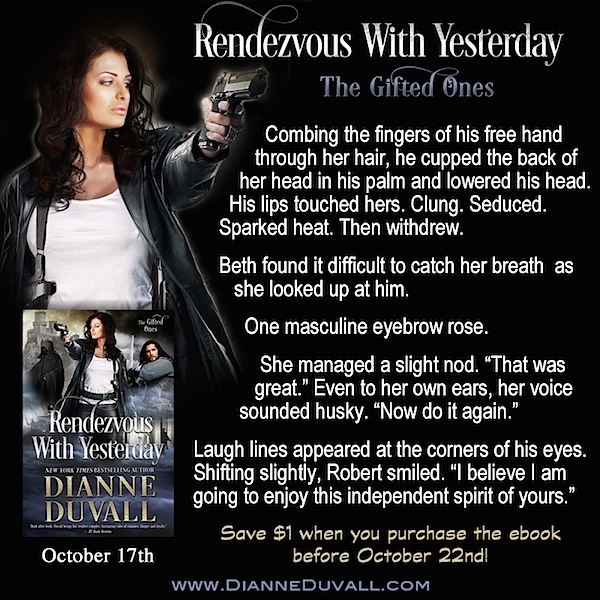