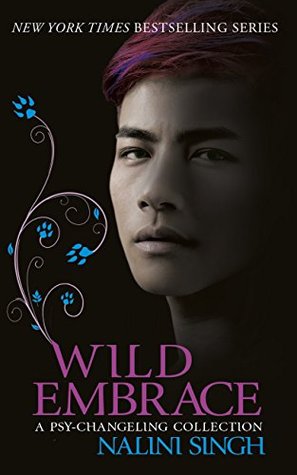 The “alpha author of paranormal romance”* presents a stunningly sensual collection of four all-new Psy-Changeling novellas, in which taboos are broken, boundaries are crossed, and instincts prove irresistible...


In a deep-sea station, Tazia Nerif has found her life’s work as an engineer, keeping things running smoothly. But she wants nothing more than to break down the barrier of silence between her and her telekinetic Psy station commander...


A changeling who can never shift lives a life of quiet frustration—until he learns how to let his leopard come out and play...

Partners in Persuasion
Still raw from being burned by a dominant female, wolf changeling Felix will never again risk being a plaything. But for dominant leopard Dezi, he’s the most fascinating man she’s ever met. She just has to convince this gun-shy wolf that he can trust the dangerous cat who wants to take a slow, sexy bite out of him…

Flirtation of Fate
Seven years ago, Kenji broke Garnet’s heart. Now the wolf packmates have to investigate the shocking murder of one of their own. And the more Kenji sees of the woman Garnet has become, the deeper he begins to fall once more. But even his primal instincts are no match for the dark secret he carries...
*Booklist, starred review

If there was one anthology that I could take with me to a desert island, it would be this one. All four books have very different vibe to each other which is I guess is what makes it a great anthology, you get all different types of tropes. All the couples and their stories are uniquely suited to them as characters. Gah I loved it. Also the cover, I want that hair color that Kenji has, alas I’m not confident enough. This is going to be as spoiler free as I can make it because seriously you need to read it.

It’s set around the time period of the second book in the series all before the fall of silence, where it’s hard to be open as a Psy showing emotions let alone being in a relationship with a human which shows how difficult (an understatement) it was for Psys to live under that regime and now they are free.

We have been hearing about Stephen, Tk based at Alaris deep-sea station for a couple of years now. Most recently in the last book, Allegiance of honour where he find out that he had a link to a human. Stephen hadn’t completed his training as an Arrow when he was deemed unfit for active duty but this ofcourse doesn’t stop him or the other Arrows of thinking him as a part of the Arrows. Tazia Nerif is an engineer at the Alaris station. Tazia career choice made it things every difficult between her family and now she prefers the months spend with the friends she’s made at the station instead. Tazia and Stephen’s love is very sweet and understanding. It’s quite chaste compared to other stories because of Stephen being a high level telepath and Tazia’s culture but it didn’t make the story less interesting or the romance, less entertaining. They were wonderful together.

This was such a treat, we get to see some stages of Dorian’s life and I might have sniffled here and there. It was just wonderful to see more of how he become the man he is and how is latency affected him in his younger years. I just loved the interactions between Dorian and the pack, how much they loved and cared for him. We get to see the sorrow and the hurt he felt at being latent, to trying to become the overachiver everyone said he was and finally him being happy with his leopard. His journey was told was told in a few chapters but the effect it had was profound.

Next up is Desiree ‘Dezi’ and Felix’s story. Not only is it a Leopard (Dezi) and Wolf (Felix) pairing but it’s also male submissive with a female dominant. I just don’t know how Nalini Singh does it but I end up loving all different pairings with different amounts of power and hierarchy. Felix, the horticultural expert of the SnowDancer pack has been hurt before in a relationship so isn’t up to anything with another dominant but Dezi, the leopard solider tempts him greatly. I don’t even know how to explain it but Dezi and Felix made such a great couple, he is proud and in awe of her. While she can’t help but fall for his endearing shyness and the gentleness displays. They were so cute and they made so happy, to be fair I was smiling the whole way through the book apart from where Dorian made me sad.

This one I have been waiting for years now, ever since we saw them bickering over a com. Garnet ‘Jem’ to other people and Kenji Tanaka have been in my mind for quite some times. I was ecstatic to learn that they would be getting their own story. This has more romantic suspense vibe as Garnet and Kenji both try to solve a murder of on of their own in Garnet’s den. Quite a bit part of the novella is spend finding the killer of Russ. Random fact: I learned beginner’s Japanese this summer at my uni, this made me ridiculously happy to see some words in the book but I digress. Garnet and Kenji were very close once, then Kenji broke Garnet’s heart leading to seven years of bickering and longing. Now that they have to spend some time together, it brings out old memories and feelings that were never forgotten.

Garnet was great, she’s a kickass take no prisoner kind of gal that would also like to have a mate and family and I thought that was great. I loved how she went around teasing Kenji when she realises how much she effects him.I was like at times to Kenji ‘dude just tell her’ but it was understandable why Kenji behaved the way he did. Because at the end of day he loved Garnet no matter what happened. He wanted the best for her, which he thought was never going to him. It’s a teeny bit angsty, as second chance romance can be.

I really enjoyed this book. This is such a great anthology, and it gives newer reader a chance to sample all different kinds of relationships and pairing the series has to offer. And gives the series followers stories of some of the couples they have been waiting for. The writing of the book as always with Nalini Singh flowed and made the characters and the story richer. This was a such a great year for the Psy-changeling not only did we get 5 stories (1 in Allegiance of Honour and 4 in Wild Embrace), we also got to see almost everyone that we have loved and seen in the series. I can’t wait till the next one!!