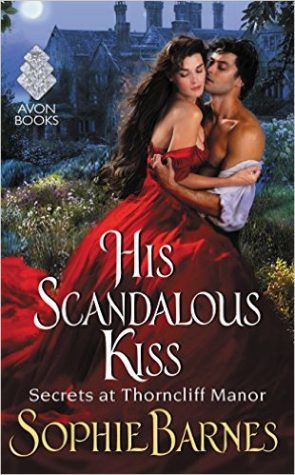 Thorncliff Manor is the perfect setting for a masquerade ball . . . where the heart’s secret desires are about to be uncovered in this scintillating Regency romance from Sophie Barnes
Richard Heartly has exiled himself from society since the war, plotting his revenge for a terrible betrayal. A masked ball at Thorncliff Manor is intended to be a brief diversion. Instead, he encounters a fascinating young woman as entranced by the music as he is. He can’t reveal his identity to Lady Mary. But her siren song keeps drawing him back, and their clandestine meetings could be hazardous to his plan—and to her virtue . . .
Avoiding an unwanted marriage was easy when Lady Mary was ignored by the ton. Thanks to her dazzling appearance at the masquerade, she’s a wallflower no longer. Eligible suitors abound, yet the only man she wants is the brooding, seductive companion who keeps his face hidden. A man who tempts her to disclose her own shocking secret, one that could divide them forever . . .

And as silence settled between them, he allowed his gaze to sweep across the terrace in silent observation until it finally found one singular lady who stood like a beacon in the night due to her lack of embellishments. “Who is that?” Richard murmured close to Lady Duncaster’s ear.

“Who is who?” she asked, searching the crowd.

“The lady standing next to the potted rose tree.” She was turned sideways, offering Richard a view of only her profile as she spoke to an older woman.

“Considering the number of potted rose tress on this terrace, you will have to be more specific.”

“Of course,” Richard said, surprised that he hadn’t noticed. “I am referring to the lady in the . . .”—he struggled for an apt description—“whitish gown with gold along the bottom.” It was a very plain gown, he noted, not as puffy as the rest. It had no frills or lace, but was cut in a simple style that hugged the torso before flaring out below the hips. It reminded Richard of something that might have been worn by a medieval queen. Rebelliously, the lady had even chosen to wear her hair down, resulting in a tumbling mass of dark brown curls that almost reached her waist.

“I see what you mean,” Lady Duncaster said. “There is an elegance about her that surely would be lost if her gown had been outfitted with beads, feathers, and lace.”

“She would have looked just like the rest,” Richard said as the lady who’d captured his interest turned to look in his direction. The upper half of her face, including the bridge of her nose, were completely concealed by a Colombina mask that matched her gown. Even so, Richard found himself helplessly drawn to the sharp look in her eyes. And her lips . . . they were the sort of lips that a man like him—a man who’d spent five years without female companionship—would be sorely tempted to kiss. Clenching his jaw, he expelled a slow and tortured breath.

“Perhaps you should ask her to dance,” Lady Duncaster suggested.

Without thinking, Richard stood, then sat back down again when he recalled that a gentleman did not stand while a lady remained seated. “Perhaps not,” he said, chancing another glance in the lady’s direction. To dance with her would do nothing but torment him. She would never be his. It was best if he remembered that.

Lady Duncaster shrugged. “I think you may be sorry if you do not,” she said. “Take it from a woman who never held back, but who always lived her life to the fullest—there is nothing worse than growing old with regret.”

Squeezing his eyes shut, Richard tried not to think of all the things that could never be changed. “Unfortunately, it does not seem as though I will have much choice in that regard.” It was impossible to keep the bitterness he felt from seeping into the words.

“If you say so.” She was silent for a moment before saying, “You are not the only one faced with obstacles, you know. In my experience, when it comes to romance, there are plenty of things that can get in the way of that happily-ever-after, which is why it is only the most determined who ever secure a love-match. That said, I do believe it is time for that minuet you promised me. Shall we proceed?”

Reluctantly, Richard nodded. “By all means.”

Lady Duncaster’s insightful words had thrown him slightly off balance. His expectations of ever sharing a future with a wife and children had been dashed long ago. He’d come to terms with that, even if he wasn’t happy about it. In fact, he was still bloody furious and very much aware that there was little chance of altering his fate, though he still sought retribution. Indeed, he doubted that there was anything on earth that could make him stop his vendetta. It had become an obsession over the years—a living creature whose hunger he hoped to one day satisfy. He could not afford any distraction, least of all when it would serve no purpose.

And yet, in the space of only a moment, an eccentric old lady with a towering wig perched precariously on top of her head and dressed in a gown that looked more like a bouquet of flowers than something one might actually wear, had forced a tiny piece of hope upon his mind. It made him wish that he had the courage to do as Lady Duncaster suggested and seek out the mystery lady, perhaps ask her to dance. But it was a fanciful thought—a dream that he deliberately allowed to fade.

Born in Denmark, Sophie Barnes spent her youth traveling with her parents to wonderful places all around the world. She’s lived in five different countries, on three different continents, and speaks Danish, English, French, Spanish and Romanian. She has studied design in Paris and New York and has a bachelor’s degree from Parsons. But, most impressive of all, she’s been married to the same man three times—in three different countries and in three different dresses.
While living in Africa, Sophie turned to her lifelong passion: writing. When she’s not busy dreaming up her next romance novel, Sophie enjoys spending time with her family, swimming, cooking, gardening, watching romantic comedies and, of course, reading. She currently lives on the East Coast.

Interview and Giveaway: A Most Unlikely Duke by Sophie Barnes