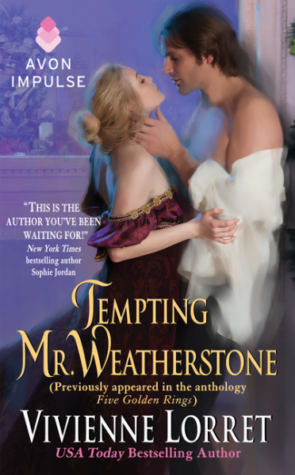 Tempting Mr. Weatherstone by Vivienne Lorret
Published by Avon, Avon Impulse on November 25 2014
Buy on Amazon US, Buy on Amazon UK, Buy on Kobo, Buy on itunes, Buy on B&N

Previously appeared in the e-book anthology Five Golden Rings.
USA Today bestselling author Vivienne Lorret revisits her Wallflower Wedding series with a delightful tale of friends-to-lovers, just in time for Christmas.
Penelope Rutledge longs for passion, but only with the man of her dreams: the brilliant, dashing Ethan Weatherstone. If only her longtime neighbor would open his eyes and realize how much she loves him. If only they weren’t best friends with so much at stake. Penelope knows her future—and their friendship—is in her hands, but is she willing to take the biggest risk of all on the man she loves?
If it were up to Ethan, life and love would be as predictable as the figures in his ledgers—certainly nothing like the adventures Penelope longs for. Yet his childhood friend has grown into a beautiful, feisty woman blissfully unaware of the danger she causes when near. Ethan knows he must save Penelope and her reputation … but can he save himself from the temptation of her lips? 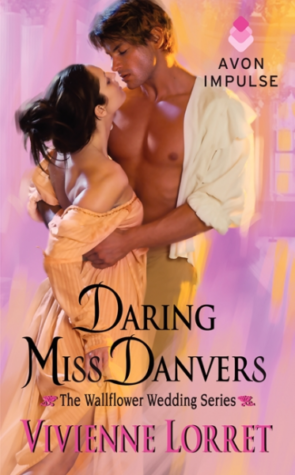 It's all fun and games … until someone falls in love.
Oliver Goswick, Viscount Rathburn, needs money—and soon. With time ticking away and his inheritance held hostage until he's properly wed, Rathburn's slim options point to a single solution: a faux engagement. In need of the perfect bride, he knows of only one candidate: his best friend's wallflower sister. The plan seems flawless, except for one problem … He can't help falling in love with her.
Poised, polished Emma Danvers knows nothing good can come of Rathburn's scheme. Spending the next two months engaged in a mock courtship is not what she'd imagined for her final season. Yet, charmed by his roguish ways and the inexplicable hammering he causes in her heart, she accepts his challenge.
For Emma, keeping the secret seemed easy when it was just a game … But as Rathburn begins to see past her reserved exterior to the passionate woman within, the risk of losing her heart becomes all too real. 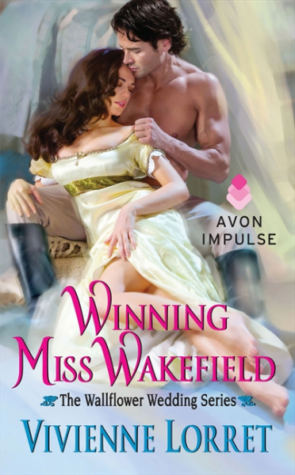 She's got nothing left to lose…
With her fiancé suddenly engaged to another and her reputation in tatters, Merribeth Wakefield needs a bold plan to reclaim her life. She must be brave. Confident. She must … kiss a rake? The suggestion is ludicrous! Yet when Merribeth finds herself alone with the dark and brooding Lord Knightswold, suddenly the plan doesn't seem so farfetched. So she does something she never thought she'd do—she kisses him.
But he has everything to gain…
The Marquess of Knightswold—Bane to most—has no use for the affections of women. Well, none lasting longer than a single night. A plot for revenge weighs heavy on his mind, leaving no room for romance. But then a shy, witty miss borrows a kiss from him in a darkened room, and everything he thought he knew about innocent debutantes vanishes along with her.
When a twist of fate brings Merribeth within Bane's grasp, he'll have to resist her charms—or risk losing everything—for the sake of his heart. 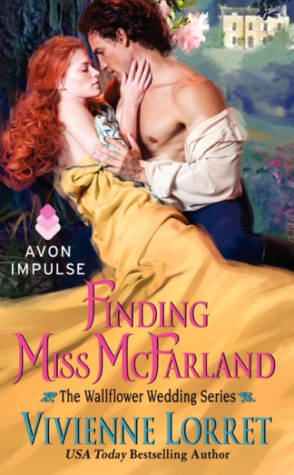 Fans of historical romance authors Lorraine Heath and Sophie Jordan will adore Vivienne Lorret's latest Wallflower Wedding novel.
Delaney McFarland is on the hunt for a husband--preferably one who needs her embarrassingly large dowry more than a dutiful wife. After the unspeakable incident at her debut, Delaney knows marrying for love is off the table, but a marriage of convenience--one that leaves her free to live the life she chooses--is the next best thing, never mind what that arrogant, devilishly handsome Mr. Croft thinks. Delaney plans to marry for money ... or not at all.
Ever since the fiery redhead burst into his life--in a most memorable way--Griffin Croft hasn't been able to get Miss McFarland out of his mind. Now, with the maddening woman determined to hand over her fortune to a rake, Griffin knows he must step in. He must help her. He must not kiss her. But when Griffin's noble intentions flee in a moment of unexpected passion, his true course becomes clear: tame Delaney's wild heart and save her from a fate worse than death ... a life without love.

Q and A with Vivienne Lorret

Q: Vivienne, where had you gotten the idea for the Wallflower Weddings Series?

Strangely enough, the Wallflower Wedding Series began as an afterthought. I wrote a Christmas novella (Tempting Mr. Weatherstone) and submitted it to an Avon “call for submissions.”

When the novella was well received, my editor at the time suggested that I create a spin-off. I was so excited about the opportunity! Since Ethan and Penelope’s story lacked unmarried sub characters, however, I had my work cut out for me.

But then inspiration struck! I remembered that, in Tempting, Penelope enjoyed embroidery. So I gave her a circle of friends who shared that interest. Adding in a few details here and there… and voila, the Wallflower Wedding Series was born.

Q: Which title or couple was the easiest to write and which gave you the most trouble?

Hmm… This is a tough question. Each story had its share of smooth sailing, as well as bumpy roads. I practically held my breath the whole time while writing Emma and Oliver’s slow, burgeoning love. I was as eager for them to realize it as, I imagine, they were. I blushed when Merribeth “borrowed” that kiss from the deliciously naughty Bane. And I laughed (horrible of me, I know) during Delaney’s incident at her debut, all over Griffin’s shoes.

What gave me the most trouble for each book was reaching the end and knowing that I had to say goodbye. I suppose that’s why I proposed the Rakes of Fallow Hall Series, so that I could check up on them.

In fact, I’ll tell you a secret. I even added a mention of Bane in my upcoming novel, WHEN A MARQUESS LOVES A WOMAN.

Q: Which heroine do you feel most closely relates to your personality?

Out of the Wallflowers, I’d have to say that I relate to Delaney McFarland. Sadly, we’re both socially awkward. In fact, the beginning of her story—the incident at her debut—is one of my own fears. Thankfully, I have never cast up my accounts in public (and knock on wood that it never happens), but there’s always that fear when facing a crowd.

I guess you could say that writers have secret ways of facing our fears by forcing our characters to live them out. It’s good for us, but not-so-good for our characters. On the bright side, I think Delaney handled the incident with a strength of character that even surprised me.

Q: What is one of the most interesting things that you have learned from researching for your historicals?

I just love research! Discovering little historical tidbits feeds my inner nerd. I can’t begin to tell you how tired my family is of hearing “Guess what I learned today?” So much eye rolling!

But one thing, in particular, I found fascinating came from an 1800s play (the title of which I have presently forgotten). The main character went into a taproom and ordered his food and drink “hot and hot.” Instantly, I wondered what that meant. Did he want hot ale, too? Was this a popular figure of speech? Inquiring minds…

I searched online and found nothing. I went to the library database and found nothing. Then I asked my friend and local research librarian, but she didn’t know either. She came up with the same results that I had. However, she had a secret weapon that I didn’t have—connections. She knew a food historian.

This “hot and hot” became such a puzzle for all of us that, after compiling research, the food historian blogged about her findings. So cool!

In the end, she found that asking for your food and drink to come “hot and hot,” meant that you wanted everything when it was ready. No waiting. In other words, bring the ale now. And if the broth is done, then bring it to me, as well, while the kitchen prepares my leg o’ mutton, aspic and eggs. Um… yum?

Or, to put it in a modern context…  If you make pancakes in a skillet, one by one, then instead of waiting to compile a short stack for your family, you’d serve each steaming flapjack—butter melting, syrup oozing—one at a time, and fork at the ready.

So, the next time you’re at IHOP, pound your fist on the table hard enough to jangle the silverware, and tell the server that you want your rasher of bacon, scrambled eggs and each fluffy pancake “hot and hot”… because you’re worth it. ; )

Q: What is your favorite part of writing historical romances?

All of it. I love the rules of society (and breaking them). I love the layers of clothing, and how even removing a glove can be racy. I love the fact that they didn’t have immediate knowledge of a potential scandal. There’s so much that can be done with slow-moving information. And on the flip-side, so much can happen when news or rumors spread like wildfire. It’s fun playing with the differences.

Also, as I mentioned before, I love the research and discovering new-to-me tidbits of history.  I often like to imagine how my current character would have reacted to the latest scientific invention, or how they felt about their changing world.

Q: What are you currently working on?

I’m currently working on a proposal for a potential new series. At this time, I can’t go into detail, but I can tell you that I’m having a lot of fun with this new set of characters.

Also in the works, is a novella that will finish the Season’s Original Series and answer some important questions, such as:

·         Will the Fates smile upon the overlooked but handsome Viscount Ellery?

·         Will Gemma Desmond escape ruination after her father’s misdeeds?

Are you curious, too?

Thank you for having me here today!

I wake up each morning, incredibly thankful that I’ve had the opportunity to write these stories. But even more than that, I feel immensely blessed to have readers who have enjoyed them.

USA Today bestselling author VIVIENNE LORRET loves romance novels, her pink laptop, her husband, and her two sons (not necessarily in that order … but there are days). Transforming copious amounts of tea into words, she is proud to be an Avon Impulse author of works including: “Tempting Mr. Weatherstone”, The Wallflower Wedding Series, and the Rakes of Fallow Hall series.

Interview with Vivienne Lorret, Author of ‘The Maddening Lord Montwood’.