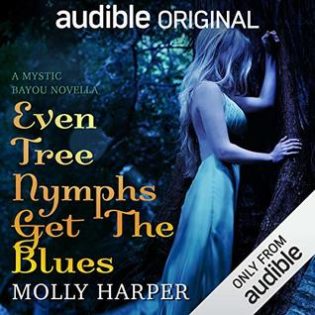 Even Tree Nymphs Get the Blues by Molly Harper
Published by Audible Studios Narrator: Amanda Ronconi, Jonathan Davis
Length: 3 hours and 3 minutes
on 6th June 2019
Source: the publisher
Buy on Amazon US, Buy on Amazon UK

A hilarious new standalone novella brimming with otherworldly charm from the reigning queen of paranormal romantic comedy Molly Harper!
Ingrid Asher is the newest resident of Mystic Bayou, a tiny town hidden in the swamp where shapeshifters, vampires, witches and dragons live alongside humans.
Ingrid doesn’t ask for much. The solitary tree nymph just wants to live a quiet life running her ice-cream shop in peace. Unfortunately, she can’t seem to shake her new neighbor, Rob Aspern, head of the League’s data science department and so good looking it just isn’t fair.
If there’s one thing Ingrid doesn’t need, it’s someone poking around in her business. But the more she gets to know the hunky mathematician, the more she finds herself letting her guard down. Can she trust him with her secrets, or will her past destroy everything?

This was really nice, I liked the narration for most part as well!

Ingrid Asher is the newest addition to the Mystic Bayou, she’s coming there to open her ice-cream/creamery shop. Ingrid is far from her home, where the other tree nymphs live due to her past with a human. She has spend the better part of her unnatural life in a city which had little place for supernatural and now is finally moving to where she can be herself in the small town of mystic bayou with other magical creatures and open space.

Rob Aspern who is the head of the League data science department hasn’t had a particularly good time in the mystic bayou with what the sheriff and the mayor being on his case.

Overall, this does have the usual Molly Harper humour, along with sweetness and some drama to make a good light listen. 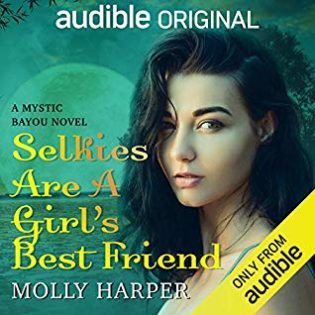 MOLLY HARPER IS BACK WITH THE NEXT WICKEDLY FUNNY, WILDLY ENCHANTING MYSTIC BAYOU NOVEL -
Sonja Fong isn't afraid of a little chaos. As director of the league's research center in Mystic Bayou, a tiny town in Louisiana that's home to supernatural creatures and humans alike, she's responsible for making sure things run smoothly. It's not an easy task when her daily memos include lines like, "new equipment is needed because the old equipment was destroyed by a temper tantrum involving dragonfire."
He job puts her in the path of Dr. Will Camody, a mysterious shifter who's returned to Mystic Bayou after a long absence only to find that he's now considered an outsider. To make matters worse, the rift - a tear in the fabric of the universe that is leaking supernatural energy into the bayou - is unraveling at an alarming rate. Now Sonja and Will must team up to fix the rift and save Mystic Bayou from certain disaster, all while their own romance is heating up. Can they have a future together while the whole world is falling apart?

Rating ~ 3.75 stars avg for narration and the story.
I was super excited to see that Sonja Fong was getting her own book. She’s the best friend of Jillian from the first book in the series How to Date your Dragon. She like Jillian is a part of League, she’s the director of league’s research center in Mystic Bayou. Her parents are also part of the league, with their super secret assignments and what not which is why Sonja is pretty close to Jillian who is like a sister to her. She’s also completely human.

Dr Will Camody, once a resident of mystic bayou now considered an outsider is back into town to open his clinic and return to the water/selkie ways of the Bayou. His return is made complicated by the fact that he getting treated like a newcomer.

Sonja and Will have have a very interesting first meeting, deciding to make ‘friends’ Sonja tries to help out Will with the hospital renovation and the rest is history…

This had the usual Molly Harper humour, along with some sweet romance and awesome friends and some angst/conflict along with magical mayhem to make things interesting. We also get some cameos from our favourite citizens of mystic bayou and how things have been with them.

Quibbles: While I understood Will’s behaviour, his over reaction to that particular incident made me really annoyed.

Overall, a pretty good edition to the series, looking forward to more!