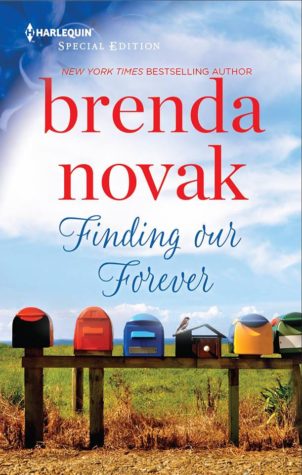 New York Times bestselling author Brenda Novak welcomes readers to the town of Silver Springs, where surprises wait around every corner!
The search for her birth mother brought Cora Kelly to the New Horizons Boys' Ranch. Getting a job there was easy enough, but confiding in the ranch's owner that she's really her daughter? That task is daunting. Especially with Elijah Turner watching her every move.
Elijah can't deny his deep attraction to Cora. But there's something about the ranch's newest employee that has him questioning her motives. If she's there to hurt his family, there'll be hell to pay. Yet, if the feelings the lovely teacher awakes in his guarded heart are any indication, Cora's appearance might be just what they were all waiting for.

Cora Kelly is a art teacher, she was adopted by the Kellys as a new born and while she loves her family she always wanted to know more about her birth parents especially her mother which leads to accepting her a job in a school run by her birth mother Aiyanna, in New Horizons Boys Ranch. Cora being unsure of what kind of reception she would get from her mother decides to get to know her mother but keeps her identity as a secret.

Elijah Turner was adopted by Aiyanna along with several other boys and  is the manger of the ranch. His upbringing before he got adopted was heartbreaking  and has left wounds of his heart that haven’t healed.

Cora and Elijah are attracted to each other but because they are both dealing with things, the connection they feel with each other takes some time to grow but when it does it oh la la… even though they both say that their relationship will be temporary they are kidding no one with ‘its just sex’. I really liked them together, theirs was sweet, cute romance and I was really happy for Cora and Elijah who finally got their happy ending!

I also liked how Elijah responded to Cora after he found out the truth. Cora and Elijah were both affected deeply by their parents so it nice seeing them deal with those issues together as well.

The question of Aiyanna gave up Cora was answered and dealt with in a fairly satisfactory way which made this book even better for me.

A small town romance with a great couple and it had a lovely ending and I’m really looking forward to reading the rest of the series!

It was a shocking experience that jump-started Brenda Novak’s career as a bestselling author–she caught her day-care provider drugging her children with cough syrup to get them to sleep all day. That was when Brenda decided she needed to quit her job as a loan officer and help make a living from home.

“When I first got the idea to become a novelist, it took me five years to teach myself the craft and finish my first book,” Brenda says. But she sold that book, and the rest is history. Her novels have made the New York Times and USA Today bestseller lists and won many awards, including five Rita nominations, the Book Buyer’s Best, the Book Seller’s Best and the National Reader’s Choice Award.

Brenda and her husband, Ted, live in Sacramento and are proud parents of five children–three girls and two boys. When she’s not spending time with her family or writing, Brenda is usually raising funds for diabetes research (her youngest son has this disease). So far, Brenda has raised $2.5 million.